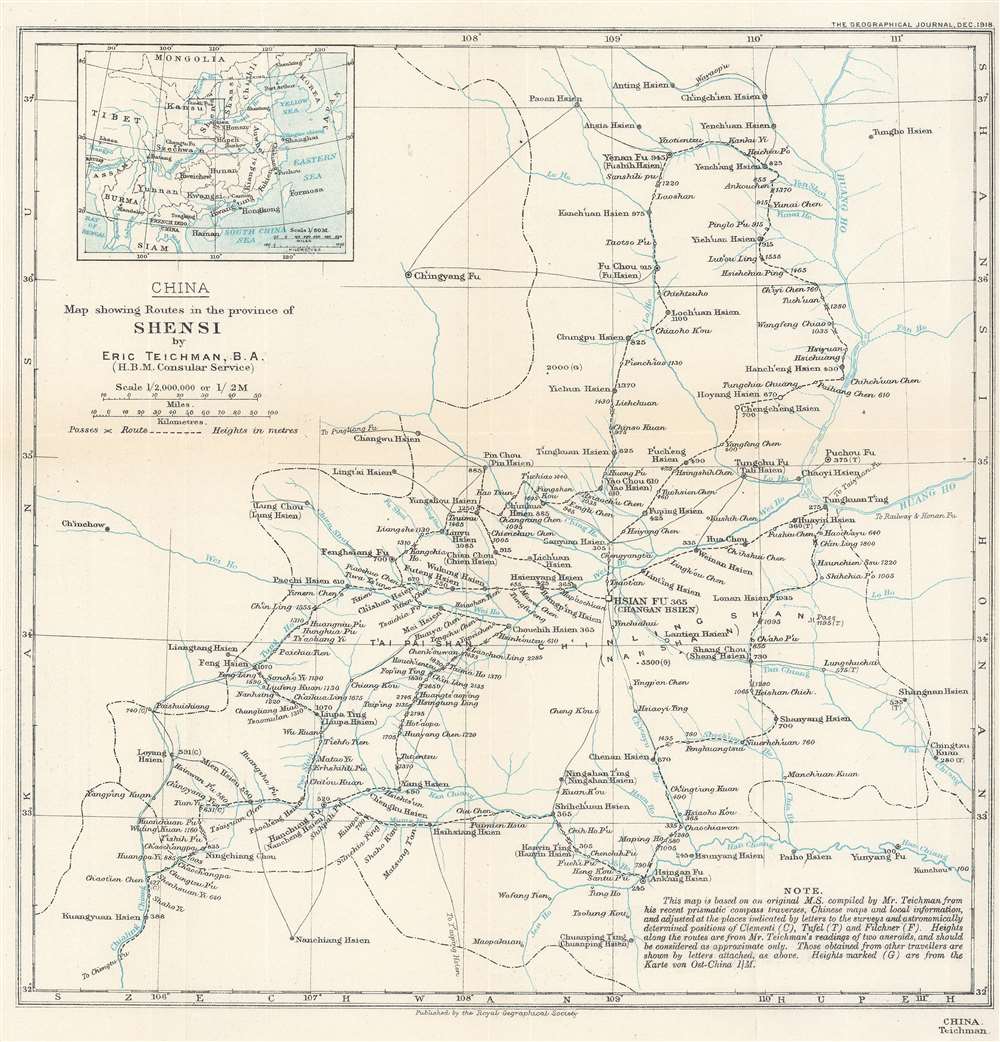 This is a 1918 Eric Teichman map of Shaanxi (Shensi) Province, China, created to accompany of an article written by Teichman for The Geographical Journal. A dashed line traces Teichman's route through the region, some of which follows the Huang Ho (Yellow) River. Towns and villages along the route are labeled, along with major towns around the region not encountered by Teichman. The area's many rivers are illustrated and labeled. Per the note in the lower right corner

This map is based on an original M.S. compiled by Mr. Teichman from his recent prismatic compass traverses, Chinese maps and local information, and adjusted at the places indicated by letters to the surveys and astronomically determined positions of Clementi (C), Tufel (T) and Filchner (F). Heights along the routes are from Mr. Teichman's readings of two aneroids, and should be considered as approximate only. Those obtained from other travelers are shown by letters attached as above. Heights marked (G) are from the Karte von Ost-China 1/M.

This map was created by Eric Teichman to accompany his article 'Notes on a Journey Through Shensi' in the December 1918 edition of The Geographical Journal. We note only one cataloged example of the present map, which is part of the collection at the British Library.

Eric Teichman (January 16, 1884 - December 3, 1944) was a British diplomat and orientalist. Educated at Gonville and Caius College, Cambridge University, Teichman became a diplomat. He traveled widely in Central Asia beginning before World War I and ending in the 1930s. He wrote two books about his travels Travels of a Consular Officer in North-West China (published in 1921) and Travels of a Consular Officer in Eastern Tibet (published in 1922). In 1935 he crossed the Pamir and Karakoram mountain ranges by pony and aon foot after taking a truck across the Tarim Basin to Kashgar. He was working as a diplomatic advisor in Chongqing, China, in 1943, after which he returned home to his estate, Honingham Hall. Teichman heard gunfire near his home of December 3, 1944, and went to investigate. After he did not come back to the house, his wife organized a search party. The following day Teichman was found with a bullet wound to the head. An investigation revealed that two American soldiers from a nearby U.S. Army Air Force base had been poaching on his estate and shot Teichman. The murderer, Private George E. Smith, was court-martialed, found guilty of murder, and sentenced to death. Despite calls for clemency, even from Teichman's widow, Smith was executed by hanging on May 8, 1945 (VE Day). The other man, Private Leonard S. Wijpacha, was charged with accessory to murder but was not sentenced to death. Learn More...