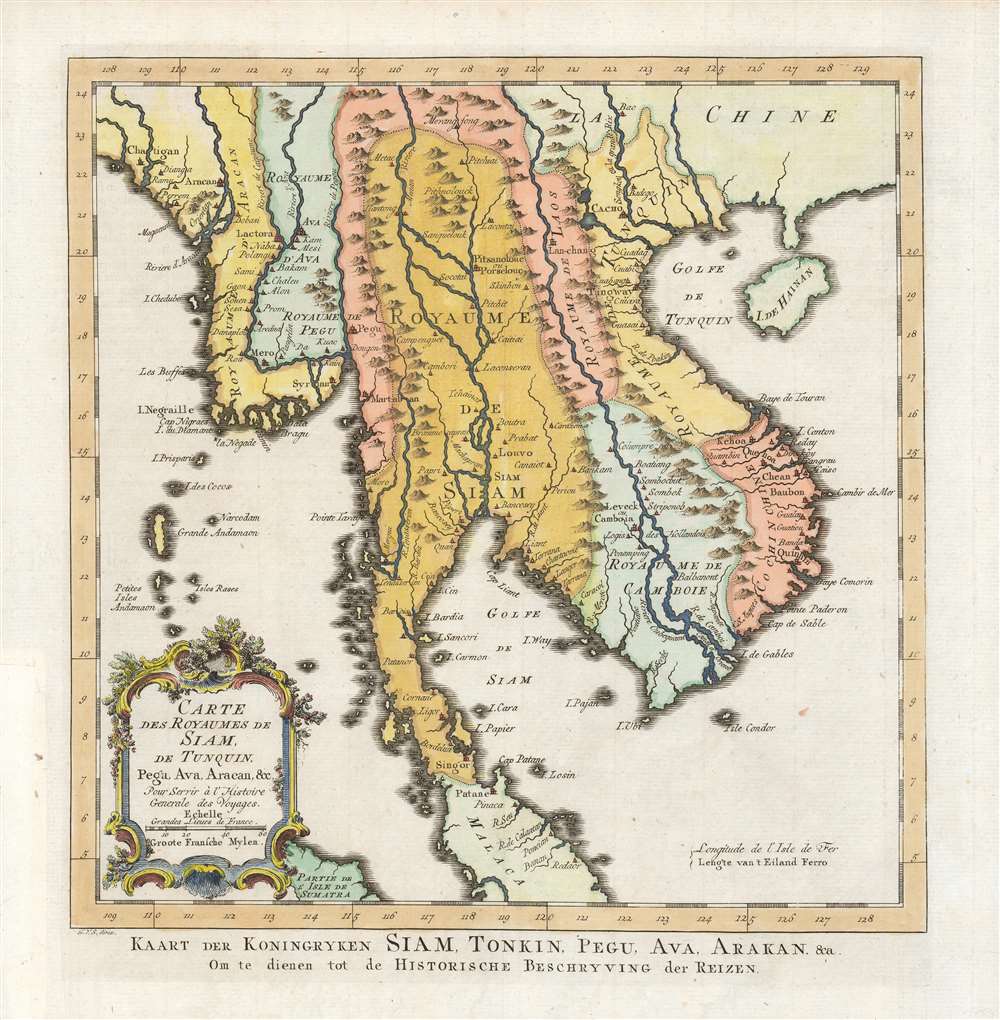 This is the 1755 Dutch edition of Bellin's map of Southeast Asia, engraved by Jakob van der Schley for inclusion in the Dutch edition of Abbe Prévost's Histoire Générale des Voyages. Centered on the Chao Phraya River, this map covers from the Kingdom of Aracan to the Gulf of Tonkin and from China to the Malay Peninsula, including the modern day nations of Thailand, Cambodia, Laos, Vietnam, Burma, and Malaysia. This map represented a considerable advancement of mapping of the interior of Southeast Asia over the maps of De l'Isle which preceded it, with numerous cities, fortifications, temples, and mountain ranges noted. The map identifies the cities of Siam (Ayutthaya), Bangkok, Lau Chang (Luong Prabong), and Pegu. Many of the islands in the Gulf of Thailand, including Samui, and in the Andaman Islands are noted as well.

The map was drawn by Jacques Nicolas Bellin to be published in volume 9 of the 1752 edition of Abbe Prévost's Histoire Générale des Voyages. For the Dutch edition published by Pieter Hondt in The Hague in 1755, the maps were re-engraved by Jakob van der Schley. A further edition of this map was printed for the 1773 Atlas portatif, pour servir à l'intelligence de l'histoire philosophique et politique des etablissements et du commerce des Européens dans les deux Indes. The 1755 edition can be distinguished from the 1773 by the composition of the final sentence of the Dutch title: the last four words of the 1755 read 'Historische Beschryving der Reizen' whereas the 1773 read 'Historische Beschryving der Volkpl.' Separate examples of the 1755 are catalogued in the Universiteit Leiden and the Bayerische Staatsbibliothek. The Histoire Générale is well represented in institutional collections.