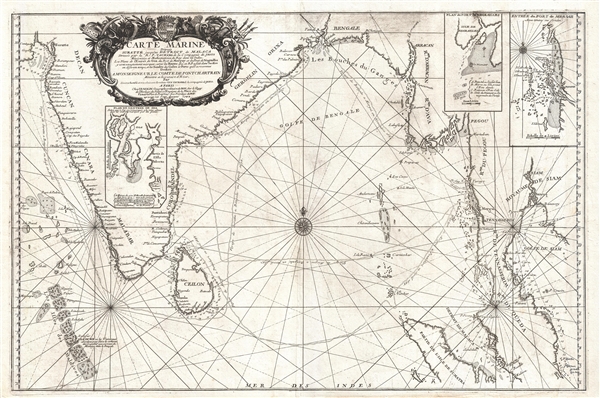 Important map illustrating the voyages of Guy Tachard and the events that led to the anti-French Siamese Revolution of 1688.
$1,800.00

An impressive separately issued 1742 nautical chart or maritime map of the Bay of Bengal, India, and Southeast Asia by J. B. Nolin. Drawn to illustrate the 1697 travels of the Jesuit Priest Guy Tachard, the map covers from Surat to the Maldives to the Gulf of Siam (Gulf of Thailand). It extends south along the Strait of Malacca into Malay as far as Malacca. Inset maps provide additional detail of the vicinity of Goa, the vicinity of Mergui (Myeik, Myanmar/Burma), and the port of Negrailles.

The map follows the voyages of Guy Tachard (1651–1712), a Jesuit missionary who was twice sent to Siam (Thailand). The first voyage, commencing in 1685, was led by Chevalier de Chaumont and François-Timoléon de Choisy. It was officially described as a scientific expedition to the India and China but was more likely focused on military and trade reconnaissance. Tachard was impressed with the idea of alliance between Louis XIV of France and the pro-foreign King of Siam, Narai (Ramathibodi III). When the embassy retuned to France in 1686, an ambassador of the Siamese court, Kosa Pan, was on board with a proposal.

Unfortunately, the military nature of the fleet, with its 5 warships and French troops, who disembarked at Bangkok and Mergui, inspirited nationalistic anti-French sentiment. Led by Phra Petratcha, this movement ultimately resulted in the 1688 Siamese Revolution, in which King Narai was killed. Petratcha became King and pursued a policy of ousting French influence throughout the kingdom.

In 1690 Tachard attempted to return to Siam a third time, but the anti-foreign Phra Petratcha on the throne he was denied entry. A fourth attempted followed in 1699 but let to no significant improvement in Siamese-French relations.

This map was first issued in 1701. The present edition has been revised and updated to 1742.

Jean-Baptiste Nolin (1657 - 1725) was a French cartographer and publisher active in Paris during the late 17th and early 18th centuries. Nolin was a man of exceptional business acumen and while many cartographers struggled financially, he prospered. Many attribute this to the fact that Nolin produced very little original work, relying primarily on business relationships with the legendary Italian cartography Vincenzo Coronelli, Jean-Dominique Cassini, and the French geographer Jean Nicolas du Trallage, Sieur de Tillemont (1620–1698). His work is known for exceptional aesthetic élan, combining Italianesque baroque and rococo ethics with most current cartographic data. It might also be said that Nolin was a bit of a con-artist in his self-promotion, often inaccurately using such titles as 'Engraver to the King' and 'Geographer to the Duke of Orleans', neither of which appointments he actually held. In 1705, he was successfully sued by Guillaume De L’Isle for copyright infringement, a case which cost him significant scientific credibility. Nonetheless, Nolin remained commercially popular and prosperous. Nolin's son, also Jean Baptiste Nolin (1686 - 1762) inherited his father’s map plates and republished many of his maps, as well as issuing his own unique maps, well into the 18th century. Both Nolins maintained offices on Rue St. Jacques, Paris. Learn More...

Good. Map is bright and clean. From the right margin and about 1 inch into the map has been expertly restored.