1919 Stanford Map of Russia and the Trans-Siberian Railway 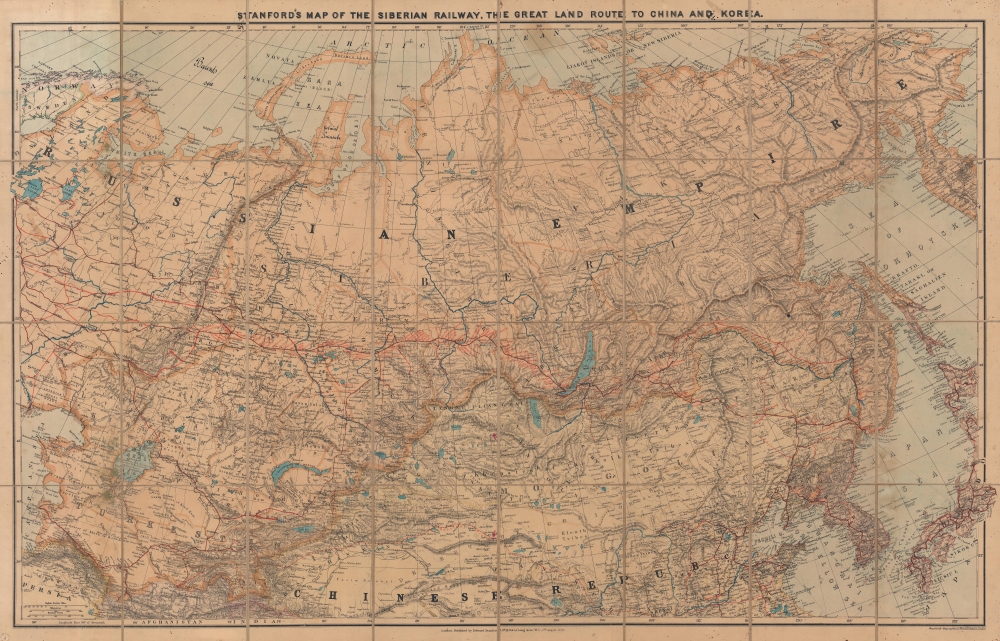 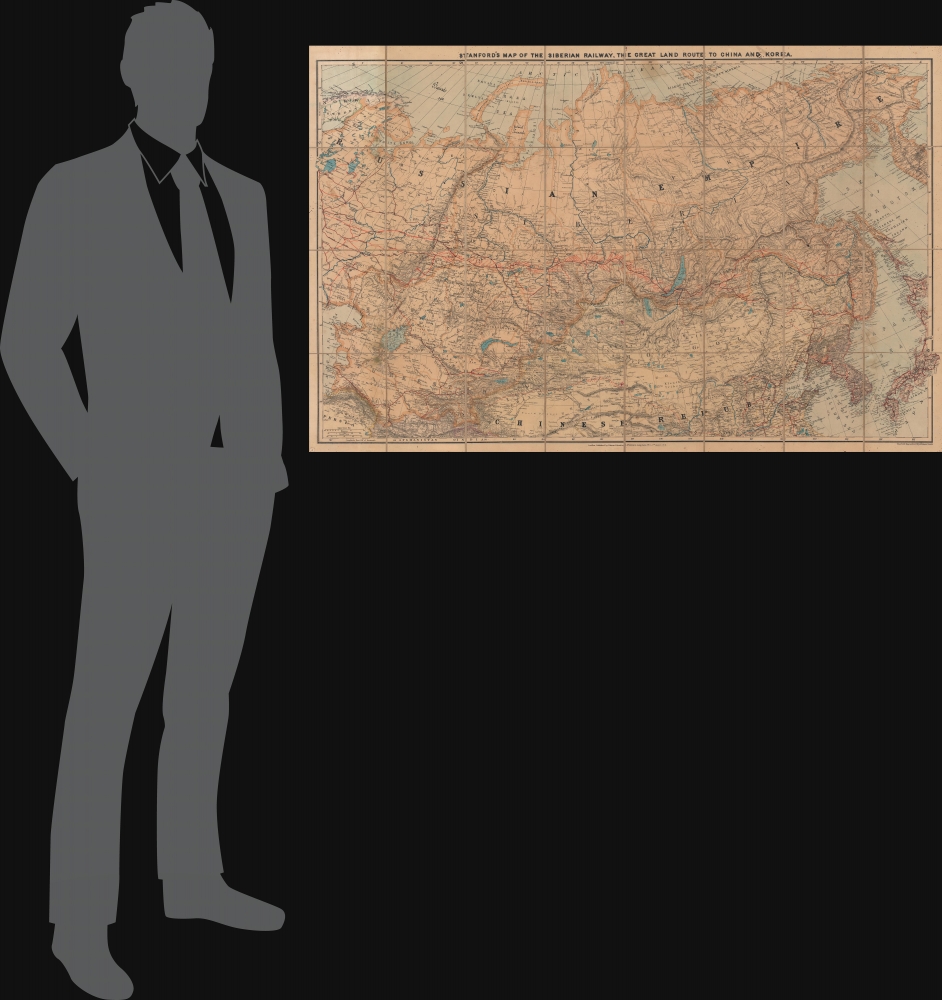 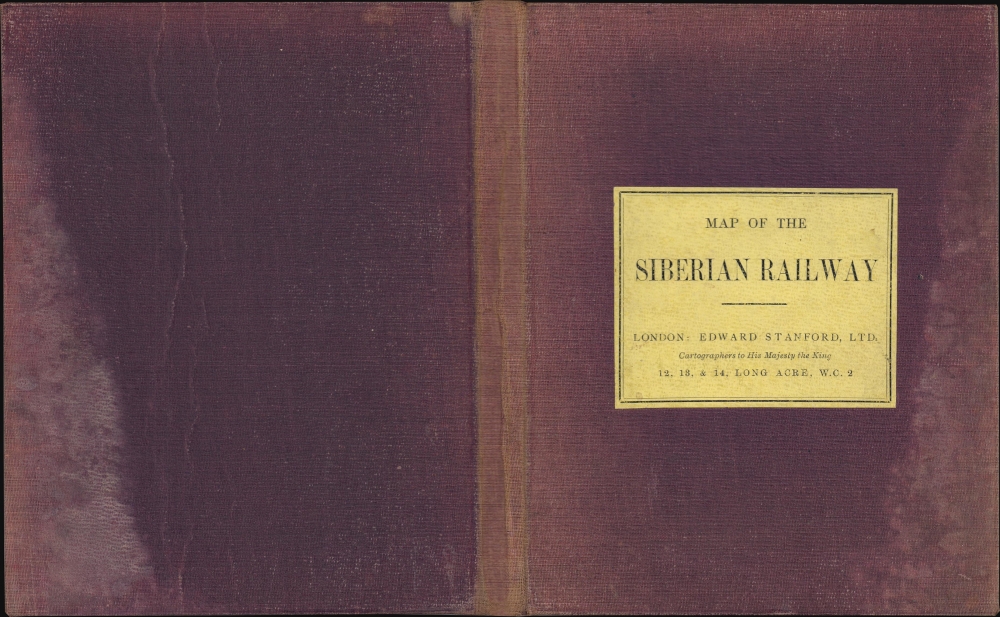 1919 Stanford Map of Russia and the Trans-Siberian Railway

This is a 1919 Edward Stanford map of Russia and the Trans-Siberian Railway. Red lines, with major stops noted highlighted the extraordinary achievement of Russian railway engineers. The completion of a railway network across the world's largest continent opened Siberia to settlement, brought Russian influence to China, led to the Russo-Japanese War, and influenced the outcome of the Russian Civil War.

The main trunk line of the Trans-Siberian runs like a primary artery across the southern reaches of the Russian Empire, with branch lines extending veinlike into Central Asia, Turkestan, and Manchuria, with connections to Korean and Chinese networks. An even more ambitious proposed route, further south, extends from Russian dependencies in Bokhara, Merv, and Kokand through the deserts of western China, to connect with lines in central China. Completion of these lines would not only enable trade and internal administration of the sprawling empire, it would have given Russian military forces unfettered access to Afghanistan, British India, and China.

The Trans-Siberian Railway and the Russian Civil War

This map was issued against the backdrop of the Russian Civil War - a distance conflict to most western Europeans, but one with global repercussions. By 1919, when this edition of this map was published, the Russian Civil War had been raging since November 1917, following Russia's exit from World War I (1914 - 1818). Both the Bolsheviks and the White Russians fought over the railway network, with the Bolsheviks finally getting the upper hand.

Russian ambitions to connect Moscow with Vladivostok on the Sea of Japan/Korea began as early as the 1850s. As Russia expanded eastward territorially, its surging population did not follow, leaving vast swaths of fertile land empty of major settlement. Riverways and poorly maintained roads unsuitable for wheeled transport provided the only direct connections to distant frontiers. With the unfolding of the Great Game, the need for a railroad became ever more pressing, as it was the cornerstone of Russian plans to invade not only Central Asia, but also access the riches of British India. Despite decades of rejected plans failed starts, Trans-Siberian Railroad Committee, personally headed by Tsar Nicholas II, began construction in March 1891. Trains began running in 1904, but construction was not finalized until 1916.

The opening of the Trans-Siberian Railroad and coincided with the rise of Pyotr N. Stolypin (1862 -1911). Stolypin served as Minister of Internal Affairs of the Russian Empire and in this role, instituted a series of revolutionary reforms intended to revitalize Russia's feudal agrarian economy and more effectively capitalize on the empire's vast eastern territories. The Stolypin Reforms (1906 - 1914) were intended to transform the traditional obshchina or open-field communal agriculture system into a capitalist property-based system. Russians willing to move to underdeveloped parts of the empire were offered assistance and concessions. The Stolypin agrarian reforms included numerous resettlement benefits for any who moved to Siberia. An Emigration Department was created in 1906. It organized resettlement and assisted settlers during their first years in the new settlements. Settlers received on an average 16.5 hectares of land per man out of total allocation of 21 million hectares. Migrants received a small state subsidy, exemption from taxes, access to low interest credit, and received advice from state-funded agencies specifically developed to help with resettlement. The operation was broadly successful. Between 1890 and 1914 over 10 million people migrated freely from western Russia to areas east of the Urals, generally following the route of the Trans-Siberian Railroad - as can be seen here where red coding illustrates resettlement progress. The reforms were particularly important to Russia's Jewish community, which moved eastward en masse to enjoy greater social, religious, and economic liberty.

The most direct route to Vladivostok included traversing Chinese dominated Manchuria. The Qing Dynasty granted Tsarist Russia a railroad concession through Manchuria. Construction began in 1897 and lasted until 1902. The Chinese Eastern Railway was thus critical to Russian plans to reach Port Arthur and Vladivostok, as well as develop Siberia. The Russo-Japanese War (1904 - 1905), wherein Russia was humiliatingly defeated by Imperial Japan, as well as increased instability in China, led Stolypin in 1906 to instigate a new track of the Trans-Siberian Railway along the Amur River fully within Russian borders - as shown on this map.

This map was created and published by Edward Stanford in 1919. Stanford began publishing editions of this map as early as 1904 through at least 1925. This is the only known cataloged example of the 1919 edition.