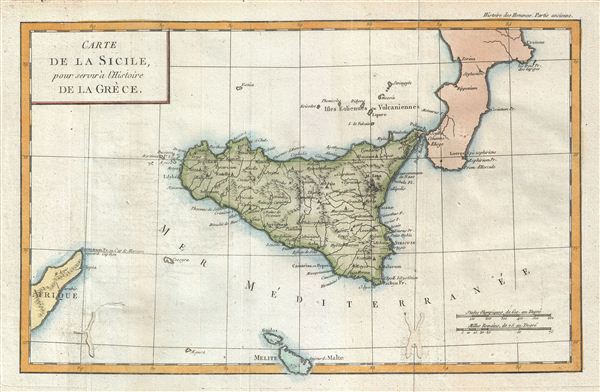 This is a beautiful example of the 1770 Jean-Baptiste-Claude Delisle de Sales' map of Sicily. It covers the Mediterranean Island in its entirety nearby Malta. Sicily became a Greek colony around 750 BC. Syracuse, identified in this map, was its most important colony. Other important regions, such as Argigento (Valley of Temples) Gela, Himera (Himere) etcetera, are also noted. Mt. Etna, the tallest active volcano in the region, is beautifully rendered. According to Greek mythology, the monster Typhon, is trapped under the mountain. Several rivers, mountains and other topographical details are noted. This map was issued as part of Delisle de Sales' Histoire des hommes. Partie de l'Histoire Ancienne. Becasue most of Sales' work was burnt under the censorship of heresy, this volume is exceedingly rare.