1849 Sidney Map of the Twelve Miles Around New York City 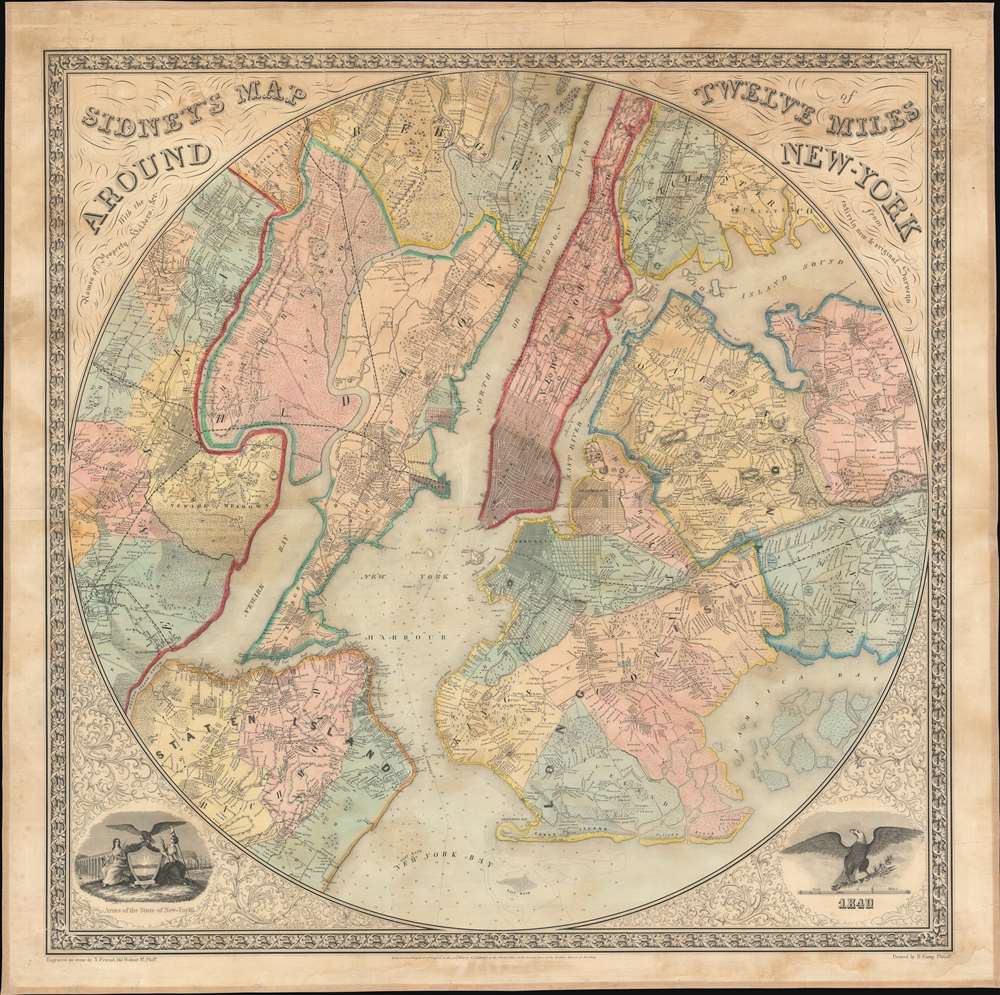 1849 Sidney Map of the Twelve Miles Around New York City

This is an 1849 James Charles Sidney map of New York City and the surrounding area. The map depicts the region from New Jersey to Westchester, Flushing, and Jamaica, and from Bergen, New Jersey and Inwood in Manhattan to Staten Island and New York Bay. Highly detailed, Manhattan's grid is illustrated up to what is probably Forty-Second Street, while the rest of the island is populated by farms and other private residences. Per the map, New York City consisted only of these gridded streets, the rest of Manhattan is referred to as New York County.

As this map predates consolidation into the Greater City of New York by nearly fifty years, Long Island is broken into several different communities, including Brooklyn, Gravesend, Flatlands, New Utrecht, Flatbush, Bushwick, and Williamsburgh, along with Queens, Flushing, and Jamaica. Myriad private residences, from Orange, New Jersey to Flushing and Jamaica, are labeled by the names of their owners, although these residences usually fall outside of urban areas, like New York City, Newark, Brooklyn, and Williamburg. Several well known areas of New York City are labeled, including the Battery, Washington Square, Union Square, the Brooklyn Navy Yard, and Greenwood Cemetery.

James Charles Sidney (1819 – April 27, 1881) was an English-American architect, civil engineer, surveyor, and landscape architect based in Philadelphia. Sidney was born in England and emigrated to the United States, settling in Philadelphia, around 1840. His first cartographic works appear in the late 1840s when he partnered with Robert Pearsall Smith to survey several new large format maps of the Philadelphia region. In the 1849 Philadelphia Directory, he appears as a civil engineer and by c. 1850, he had established a partnership with the architect James P. W. Neff, Sidney and Neff, located at 80 Walnut Street. Around this time, he also published his most important work on architecture, American Cottage and Villa Architecture . The partnership with Neff dissolved c. 1854. It may have been because he was neglecting the architecture business to procures more maps for Smith, including the 1852 Map of the City and Vicinity of Boston. After 1854 he briefly relocated to New York to participate in Smith's mapping of that state. He returned to Philadelphia in 1857 forming a partnership with Andrew Adams, an architect and surveyor. During this time he completed a masterplan for Philadelphia's Fairmont Park, which was adopted and approved by the city council in 1859. The partnership with Adams dissolved one year later in 1860. In 1864 he took a new partner, Frederick C. Merry, founding Sidney and Merry, which continued the work on Fairmont Park and later Chestnut Hill. From 1865, Sidney worked independently and spent the rest of his careers designing schools for the Controllers of the Public Schools of Philadelphia. He became a member of the American Institute of Architects in 1870. Sidney's initials are often misrepresented on maps as J. G. and/or F. C.