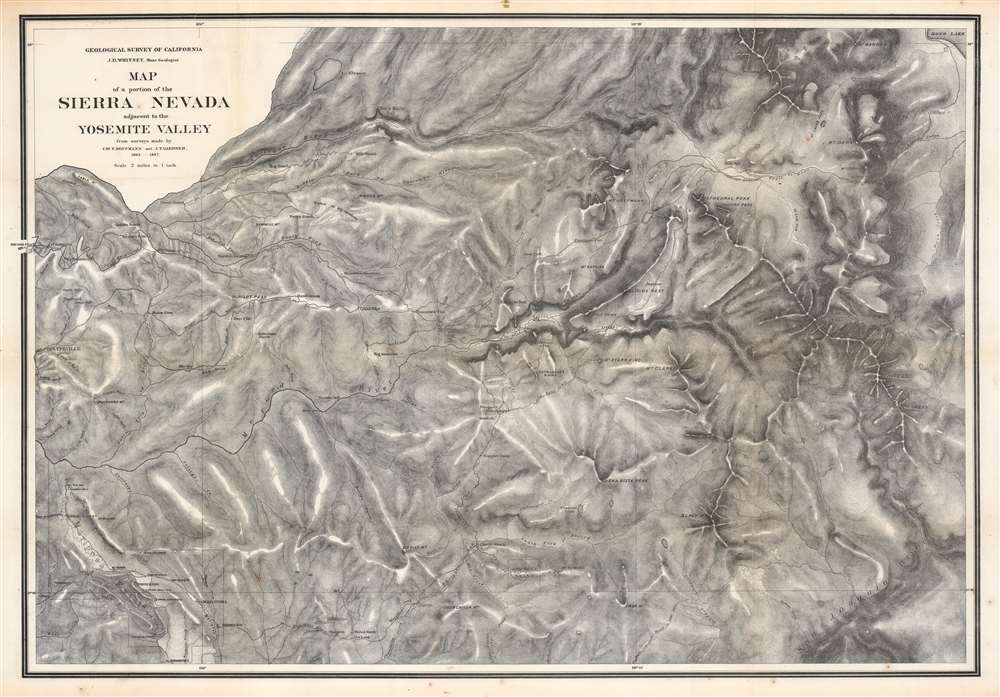 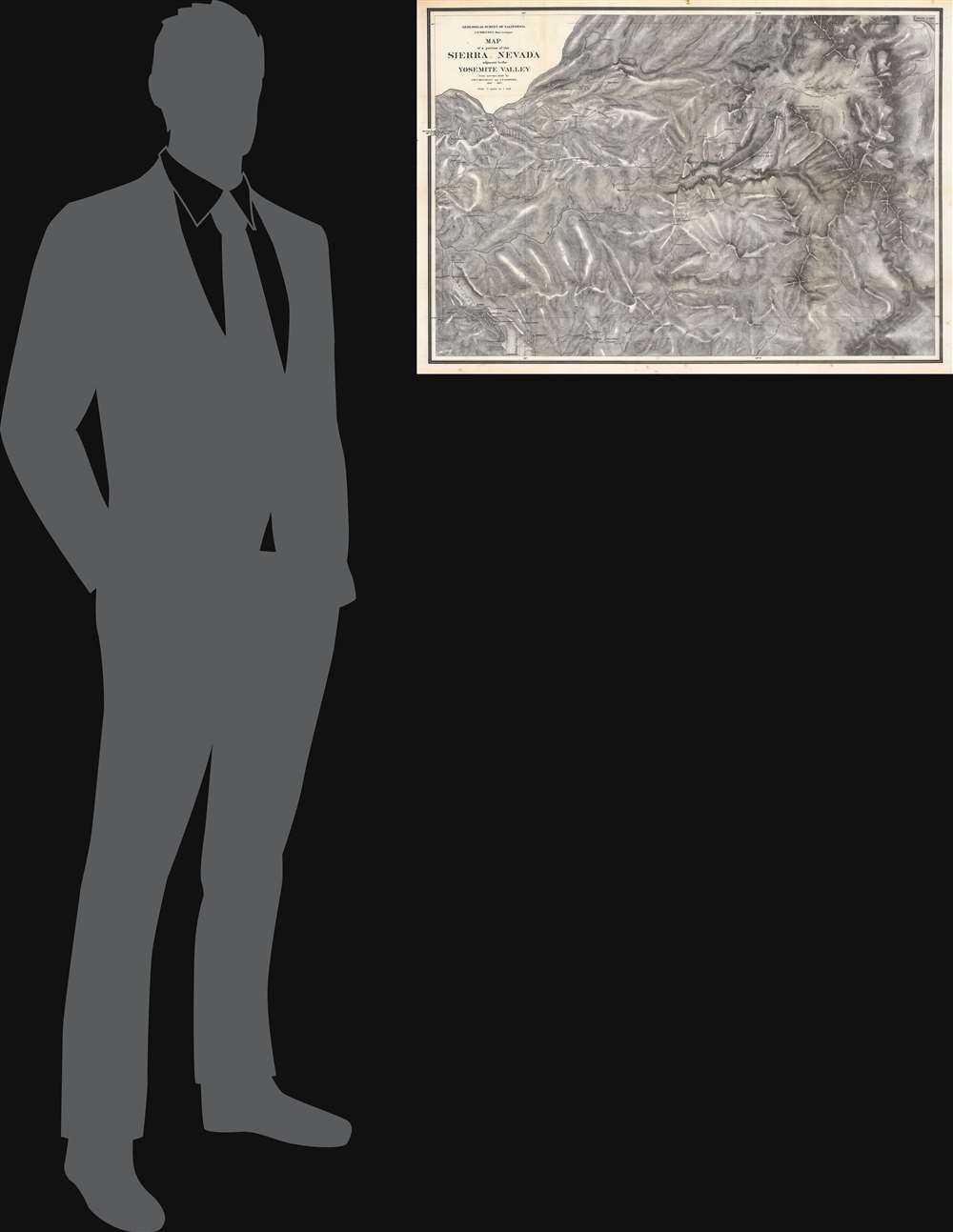 This is an 1868 Charles Hoffmann and James Gardiner's detailed map of the Yosemite Valley, California, and its surroundings, considered one of the earliest obtainable maps of that region. This map represents early government efforts under Frederick Law Olmsted and Josiah Dwight Whitney to map Yosemite as America's first reserved parkland. It offers superb detail, noting El Capitan, Cathedral Peak, Yosemite Fall(s), Half Dome, the Merced and San Joaquin Rivers, Lake Eleanor, a portion of Mono Lake, and much more.

The Yosemite Grant passed Congress on June 30, 1864, after which it was promptly signed into law by President Abraham Lincoln. This is the first instance of land being set aside specifically for preservation and public use by the U.S. federal government and set a precedent for the 1872 creation of Yellowstone. The grant created an urgent need for a survey of the ceded lands before winter set in.

Two young graduates from Yale's Scientific School, Clarence King and James Terry Gardiner, were assigned to the task. While a government effort, the King-Gardner survey was actually paid for by Frederick Law Olmsted, famed designer of New York City's Central Park. As the nation's premier park expert Olmsted was harnessed by the Lincoln administration to draft a charter and plan for Yosemite. Eager to get some sort of map of the valley, Olmsted used his own personal finances to complete the survey before winter - with the expectation that he would later be reimbursed by the state (he was).

The initial survey was basic and offered only a loose sketch encompassing Yosemite Valley's shape and proportions. Of the valley floor itself, little detail was included, but the cliffs were well mapped with hachure. In 1867, Charles F. Hoffman led a second survey expedition that included both King and Gardiner, to fully survey the valley floor.

The map was printed in New York by Julius Bien in 1868 for the first edition of Josiah Dwight Whitney's Geological Survey of California Yosemite Guide-Book, published 1869. It exists in several states, which can be distinguished according to the inclusion, removal, or renaming of features. For example, 'Milk Ranch' and 'McLane's Pass' are renamed 'Mill Ranch' and 'Mono Pass,' respectively, in later states. This example does include Hite's Cove at the confluence of the Merced River and Devil's Gulch, though in a different location and without an adjoining road included in later states, suggesting that this it is an early successor to the first state of the map (Rumsey 4212.019). The various states of this map are well represented in institutional collections (sometimes cataloged as 1867), but scarce to the market. It is closely related to a second map that accompanied the Yosemite Guide-Book by Gardiner and Clarence King (YosemiteValley-gardner-1870).

James Terry Gardiner (May 6, 1842 - September 10, 1912), sometimes spelled 'Gardner', was an American surveyor and engineer. Gardiner was born in Troy, New York. He studied at the nearby Rensselaer Polytechnic Institute, and afterwards at the Sheffield Scientific School. In 1863, he joined a childhood friend and geologist Clarence King (January 6, 1842 - December 24, 1901), to travel cross country on horseback to San Francisco - an intimidating and arduous journey. There he worked with the United States Army Corps of Engineers as a civilian assistant and participated in the construction of fortifications on at Fort Mason and Angel Island. From 1964 he worked with the California Geological survey under Josiah Whitney (November 23, 1819 - August 18, 1896). Under Whitney, and often accompanied by King, he embarked on a series of important surveys, including the first scientific survey of the Yosemite Valley and the High Sierra. In 1867 he joined the Fortieth Parallel Survey, led by his friend King. From 1872 - 1876 he was the chief topographer for the Hayden Survey. Afterwards he took a position as director of the State Survey in New York. Meanwhile, he became involved in the mining industry, writing a report on coal and iron in Colorado (1875); serving as vice-president of the coal companies belonging to the Erie Railroad; and becoming president of the Mexican Coke and Coal Company in 1899. With his father-in-law, Bishop William Croswell Doane, he helped establish the community of Northeast Harbor on Mount Desert Island, Maine. There he built a large summer home named, Ye Haven. It still stands today. Gardiner died in Northeast Harbor. Learn More...


Charles Frederick Hoffman (February 29, 1838 - June 20, 1913) was a German-American topographer. Born in Frankfurt, Germany, Hoffman attended engineering school in Germany before immigrating to the United States. He arrived in California in 1858 and was recruited by Josiah Whitney to the California Geological Survey, where he worked as a topographer. Hoffman is credited with introducing topography to the United States and helped explore the Sierra Nevada Mountains from 1860 to 1870. He then spent 1871 and 1872 as a Professor of Topographical Engineering at Harvard University, before returning to California to continue his work with the California Geological Survey in 1873 and 1874. While a member of the Survey, Hoffman achieved several first ascents of mountains in the Sierra Nevada, including Mount Brewer, Mount Dana, and Tower Peak. After leaving the Survey, Hoffman worked as a consultant for major banking firms and other conglomerates examining and reporting on mining properties in British Columbia, Mexico, Alaska, Siberia, and along the Pacific Coasts of the United States and South America. He founded the Red Point and Hoghead Gravel mines in 1886 - 1887 for the Societe Anonyme de Golden River', a French corporation. He also worked as their manager for many years. Hoffman married Lucy Mayotta Browne in 1870, with whom he had four children. Mount Hoffman in Yosemite National Park, is named in his honor. Learn More...

Very good. Sporadic foxing and other imperfections, especially in the margins.