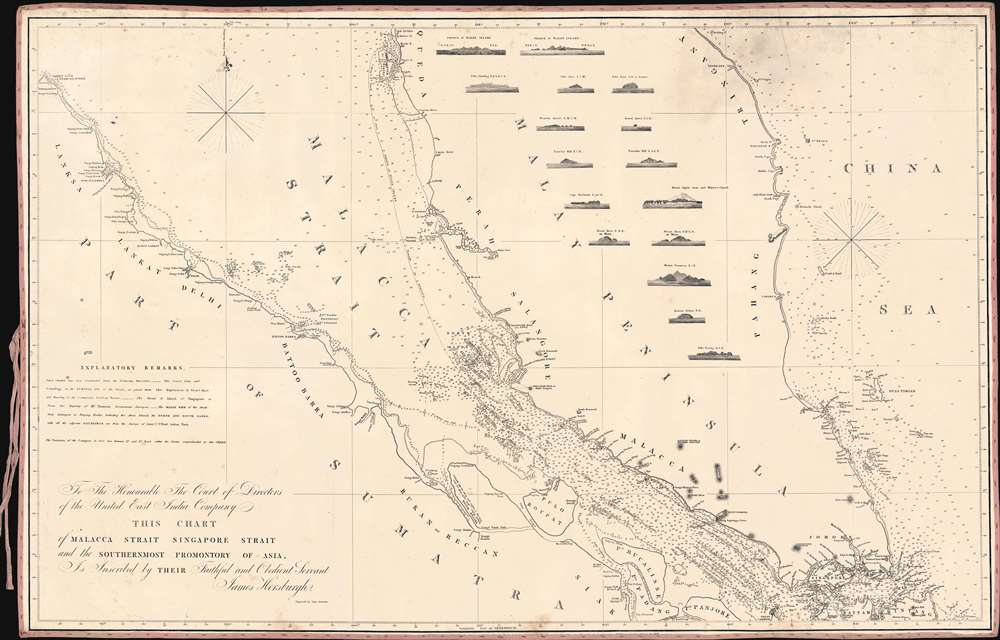 This 1857 nautical chart or maritime map of the Strait of Singapore and the southern part of the Malacca Strait is considered to be James Horsburgh's most desirable chart. Made for the British East India Company, this is one of the first charts to accurately map these heavily trafficked but treacherous straits. The chart covers the Malay peninsula roughly from Penang (Prince of Wales Island) to the island of Singapore and from the Sumatran coast to the China Sea. It features sixteen profile views as well as countless depth soundings, especially around the dangerous southern part of the Malacca Strait in the vicinity of Singapore.

The basic cartography can be traced to Jean-Baptiste d'Aprés de Mannevillette's map of 1745 and Thomas Jefferys' map of 1794. Some of the hydrography here is based upon Horsburgh's own survey work completed between 1790 and 1806. It also includes the work of other cartographers and navigators collected and compiled by Horsburgh. The coastlines and soundings on the Sumatra side of the Strait are based upon the soundings of the Bombay Marines Lieutenants W. Rose and Robert Moresby. The Strait of Singapore is based on the government surveys of John Turnbull Thomson. The Malay side of the Malacca Strait benefits from soundings completed by Lieutenant C. V. Ward of the Indian Navy.

This Edition - Why it is important.

The present edition exhibits updates by an Admiralty assistant to 1857. Among the changes over previous editions are a more detailed identification and shading of shoals, particularly around The Brothers just west of Singapore, a more comprehensive treatment of the Long Middle Bank and the Channels Bank, and a revision of the North Sands near Selangor (modern-day Kuala Lumpur). There has been a complete reassessment of the Singapore Strait and both Singapore City and New Harbor appear for the first time on the map. Further north in the Malacca Strait, greater detail has been added on the Perak (Perah) River where a 'Malay Town' and 'Dutch Factory' have been identified. Several lighthouses have been added as well as corrected soundings throughout.

As this map went to press, Singapore was becoming increasingly prosperous and increasingly dangerous. Convict transports through the Straits of Singapore to penal colonies were blamed for street gangs, criminal secret societies, and other violence. At the same time, relations between the merchant and governing classes became tense. The Straits Settlements Governor at the time, William John Butterworth, was nicknamed 'Butterpot the Great' by angry merchants who blamed him for corrupt officials and inept civic management. Also, word of the Indian Rebellion of 1857 come to Singapore, leading to fears that the large Indian convict population would revolt there as well. This led to general panic that had long-term ramifications for the Indian population of Singapore and the Straits Settlements in general.

This map was compiled by James Horsburgh. It was engraved on behalf of the British Admiralty Office in 1857. Horsburgh first published this chart in 1826 and it was updated in 1844, 1847, and 1857. All examples and editions are extremely scarce and desirable.


John Bateman (fl. 1804 – 1825) was a British copperplate printer, map, and chart engraver active in London during the early part of the 19th century. Bateman is best known for his maps and charts, especially of the East Indies engraved for James Horsburgh and published between 1804 and 1825. He appears to have spent time in the East Indies with records documenting him in Calcutta as early in 1799 and may have befriended Horsburgh there. Some have speculated that John Bateman is related to Richard Bateman, another map and chart engraver active during roughly the same period. Learn More...

OCLC 19000709. Durand, F., and Curtis, Richard Dato', Map of Malaya and Borneo: Discovery, Statehood and Progress, #68.
Looking for a high-resolution scan of this?