1798 Laurie and Whittle Map of the Singapore Straits, Jahore, and Malacca 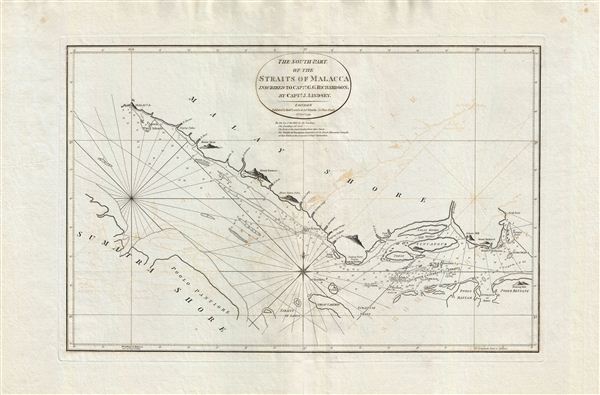 1798 Laurie and Whittle Map of the Singapore Straits, Jahore, and Malacca

One of the earliest and most important nautical charts showing Singapore Island.

An exceptionally scarce and important 1798 nautical map of the Malacca and Singapore Straits by the English maritime publishers Robert Laurie and James Whittle. This spectacular chart covers the southern tip of the Malay Peninsula as well as the surrounding islands roughly from Malacca, then the region's principle trading port on the west coast of Malay, south past Singapore Island, to Poolo Bintang, and Point Romania. It also includes parts of adjacent Sumatra. Along the coast various mountains are noted, including Mount Moar, Mount Formoso, Mount Battou Batou, and Jahore Hill. This islands of Singapore (Sincapour), Tooly, Salat Booro, Great Carimon, Little Carimon, Poolo Battam, and Poolo Bintang are noted. Countless depth soundings, as well as shading to indicate shoals, reefs, and other undersea dangers are evident throughout.

Though in 1798 the island of Singapore had net yet been settled by British colonial figures Stamford Raffles, William Farquhaur, and John Crawfurd, the Straits of Malacca and Singapore were nonetheless a vital trade artery. During this period, the late 1700s, the East Indian spice trade rose to its height, transforming joint-stock companies like the British East India Company to global powers. Today, the Singapore Strait, a 16 kilometer wide passage between the Strait of Malacca and the South China Sea, remains one of the world's most active trade routes, facilitating nearly one quarter of the world's exports of oil and coffee, among many other goods. Singapore itself has risen to become one of the world's most important and wealthy city-states and a hub of international business.

Cartographically speaking, this map first appeared in the manuscript journals of the British hydrographer Joseph Huddard (1741-1816), who mapped part of the coast of Sumatra in 1778 and 1779. It was later printed with various revisions and updates by John Price (1787) and Mr. McDonald (1793), before realizing its present form under Laurie and Whittle in 1798.

Laurie, R., and Whittle, J., The East-India Pilot, or Oriental Navigator, on One Hundred and Eighteen Plates: Containing a Complete Collection of Charts and Plans, &c., &c. for the Navigation not only of the Indian and China Seas, but of those also between England and the Cape of Good-Hope; Improved and Chiefly Composed from the Last Work of M. D'Apres de Mannevillette; with Considerable Additions, from Private Manuscripts of the Dutch, and from Draughts and Actual Surveys Communicated By Officers of the East-India Company A New Edition, Containing One Hundred and Five Charts. (London: Laurie and Whittle) 1799.

Very good. Light offsetting. Extremely ample margins all around.
Looking for a high-resolution scan of this?