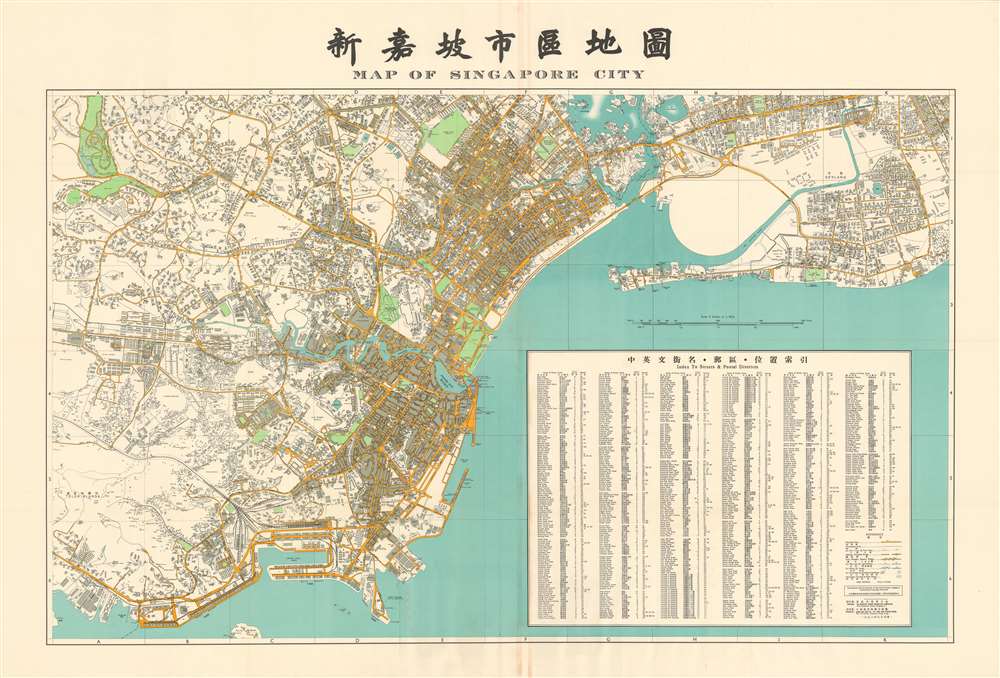 This is an extremely rare large format 1958 first edition map of Singapore in Chinese and English. Being published just one year after the 1957 Treaty of London recognized the independence of the Federation of Malaysia – which then included Singapore - and in the year that Singapore formally attained internal self-governance. The political transition led to a wave of new bi-lingual publications as English was no longer the only official language. Maps in multiple languages became a necessity both for functional and administrative use.

The Path to Self-Governance

Singapore suffered extensively under Japanese control during World War II. Much of the infrastructure was destroyed, including electric and water supply systems, telephone services, and harbor facilities. Moreover, Britain's complete failure to defend Singapore led to anti-colonial and nationalist sentiments. By 1955, Singapore was in the midst of an aggressive redevelopment and attained partial self-governance. This process demanded new cartography and work on this map commenced under David Marshall, the first Chief Minister of Singapore and was fully realized under his successor, Lim Yew Hock. Lim Yew Hock led the negotiation for full internal self-sovereignty. Part of the requirement imposed by the British Parliament was that the nation prove self-sufficiency, in terms of internal development, infrastructure, and defense. This map was designed to help establish the city-state's readiness to join the modern world as a new nation. The 1958 State of Singapore Constitution or the Singapore (Constitution) Order in Council 1958 laid out the basic government structure for a self-governance.

The plan, presented on a vast scale, provides a wealth of information, much of which is technical in nature and hints at the map's administrative purpose. It notes, for examples, on 'metalled' and 'unmetalled' roads, car tracks, 'foot patch', iron, wooden, and masonry bridges, pipelines, light railways, permanent and temporary buildings, rivers, canals, and parks. A massive index in the lower right quadrant details streets and postal districts in both English and Chinese.

This map was published by the Singapore Chinese Booksellers Association and printed in Hong Kong by Chung Hwa Book Company. Most likely this was printed in Hong Kong because Singapore, at the time, did not have a printer experienced in with Chinese. A note identifies this as the first edition, but it is unclear if subsequent editions followed. We suspect that the map had an extremely small print run as we have identified only three other examples, one which we sold previously, another in the National Archives of Singapore, and a third in private hands.

National Archives of Singapore, SP006291.
Looking for a high-resolution scan of this?