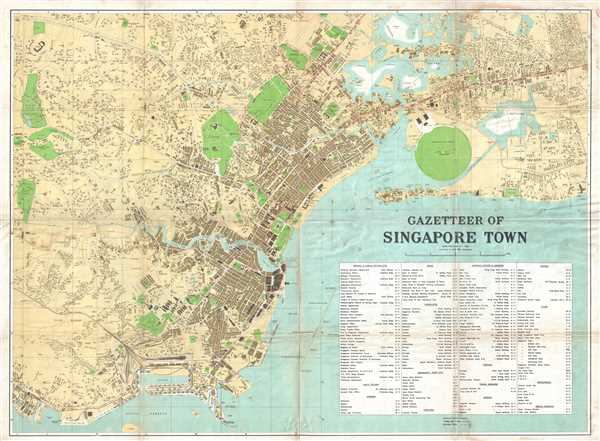 This is a 1938 F.M.S. Survey city map or plan of Singapore. The map depicts the city of Singapore from Bukit Timah Road and Telok Blanga Road to the Sea View Hotel and Paya Lebar. Highly detailed, individual buildings are illustrated throughout the city, several of which are labeled. The Lee Rubber Factory, several Muslim (Mohammedan per the map) cemeteries, and the Firestone Rubber Company are among the labeled locations. The Royal Singapore Flying Club sits near the Singapore Civil Airport, with a seaplane approach and anchorage running out into the channel. Neighborhoods are labeled, along with myriad roads and several parks. Trolley and bus routes are depicted using either a solid or dashed line, respectively. An index of cinemas, public offices, consulates, and other locations around the city is located in the lower right corner.

Good. Some soiling. Verso repairs to fold separations. Map of Singapore and Jahore on verso.