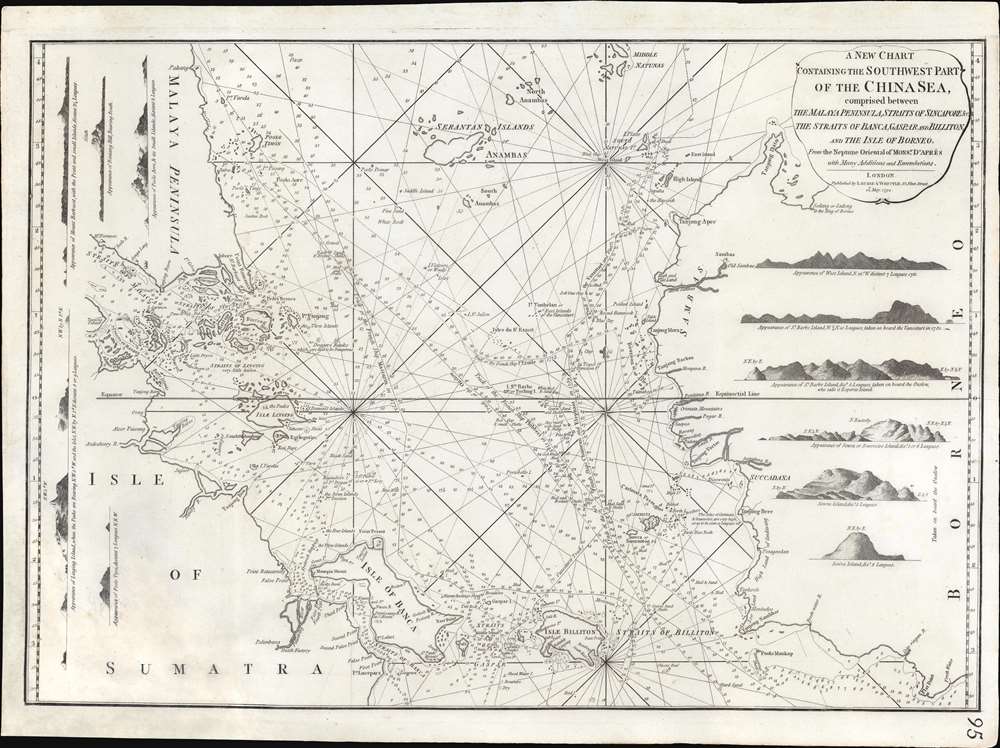 A scarce 1794 Laurie and Whittle nautical chart or maritime map of the southern tip of the Malay Peninsula, including the island of Singapore (the city had not yet been founded), the Straits of Malacca, and adjacent parts of Sumatra and Borneo. Cartographically this chart is a vastly updated variant of Jean-Baptiste d'Après de Mannevillette's earlier chart issued in the Oriental Neptune.

Though the trade center of Singapore had yet to be founded, this passage was nevertheless a well-traveled but extremely dangerous artery in the passage to China and the Spice Islands. The region hosted several important straits, including the Straits of Malacca, the Straits of Sincapore (Singapore), and the Straits of Banca, Gaspar, and Billiton. The cartographer notes the routes of various ships, and their associated soundings, offering a hydrographical timeline of these important waters. Routes identified include those of the French ship Mascarin (1773), the Onslow, the French ship L'Etoile (1775), the Vansittart (1781), and the Chameau and Elephant (1759). Despite these mappings, and others, the region remained dangerous and poorly understood. To illustrate, a note under the Straits of Linging (Lingga) reads 'Very Little Known' and Dogger Banks are 'said to be Dangerous.' In addition to the map proper, this beautiful chart features eleven coastal profiles, including views of Bintang, Poolo Aore, Linging Island (Lingga), Sowra Island, and Barbe Island, among others. The city of Johor is noted at the southern tip Malay.

This is an extremely scarce nautical chart. The OCLC identifies only one example, in Singapore's Lee Kong Chian Reference Library. We have identified a second in the National Library of Australia and a third in the Library of Congress. No further examples are known. Laurie and Whittle published this chart from their offices at 53 Fleet Street, London, on May 12, 1794. It was issued independently as well as offered in various composite editions of the East-India Pilot, or Oriental Navigator.


Jean-Baptiste Nicolas Denis d'Après de Mannevillette (February 11, 1707 - March 1, 1780) was a French sailor, navigator, and hydrographer active in the mid-18th century. Mannevillette was born in Le Havre to a family of wealthy seafarers. He completed his first major voyage at 12, when he accompanied his father, Jean-Baptiste-Claude d'Après de Blangy, a captain of the Compagnie des Indes (French East India Company) vessel Solide to Bengal. On his return to France, he he studied mathematics and navigation in Paris under Joseph Nicholas De L'Isle (1688 - 1768) before returning to the sea at 19 as a fourth officer as on the merchant vessel Marechel d'Estrees. Mannevillette himself eventually attained the rank of Captain with the Compagnie des Indes. In the course of numerous voyages around Africa to India and China, Mannevillette collected and revised numerous nautical charts. His sophisticated use of the most modern instruments, most specifically the Octant or English Quarter, and keen mathematical mind, enabled Mannevillette to correct many significant errors common to earlier maps. These updates were eventually compiled and published in Mannevillette's most significant work, the 1745 Le Neptune Oriental. The 1745 Neptune Oriental was commissioned by the Compagnie des Indes and its production earned Mannevillette admission into the Academy of Sciences. The atlas was well received, but shortly after publication, most unsold examples were destroyed by the French Admiralty, who considered the secrets of East Indian navigation too dangerous for dissemination. In 1762 the Compagnie des Indes appointed Mannevillette director of chart at Lorient. In 1767 King Louis XV conferred the Order of St. Michael upon him and made him an associate of the Royal Marine Academy. In the 30 years following his first publication of Le Neptune Oriental, Mannevillette worked doggedly with his lifelong friend, Alexander Dalrymple (1737 - 1808) to update his original work with new and improved charts. In 1775, he republished his opus in a greatly expanded format - by this time nautical information was less tightly guarded. Mannevillette died on March 1, 1780 at 75 years of age. Learn More...

Good. Some restoration lower left including leaf casting to repair and stabilize area of thinning with slight loss near the 'S U M' of 'Sumatra'.