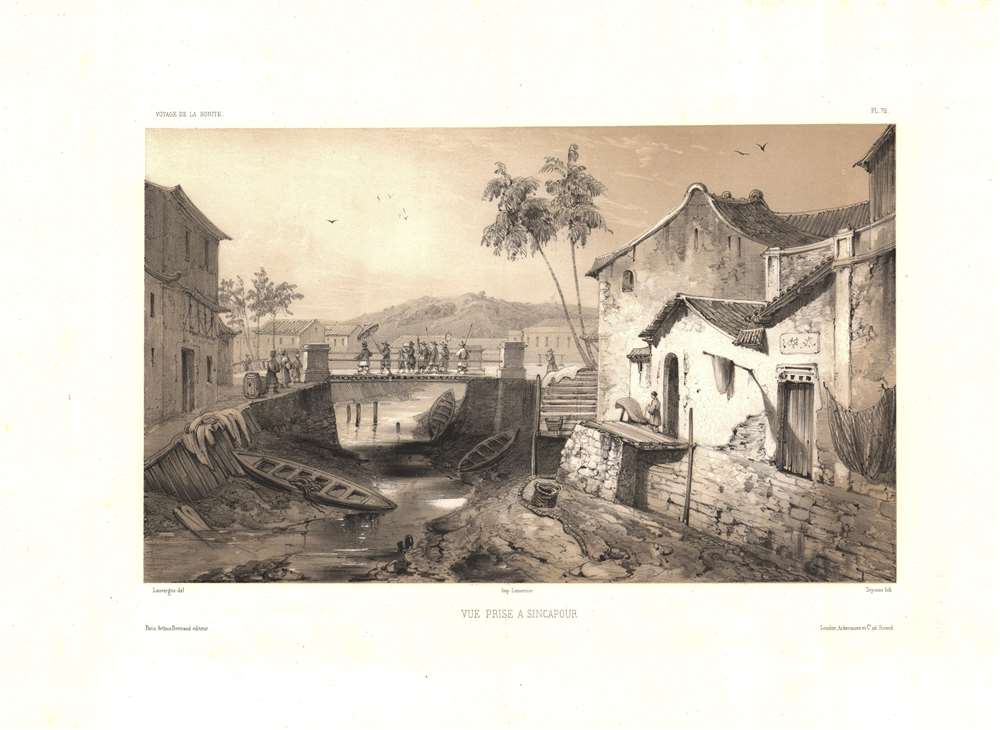 One of the earliest obtainable views of Singapore, this c. 1840 image was drawn by Barthélemy Lauvergne. The 2-color chromolithograph view likely looks east along Singapore River with the old bridge on South Bridge Road at center. Beyond, Battery Point with a hint of fortifications is evident. The low water level and dock extending into empty space underscores that this view was done during the dry season. The Chinese Campong is on the right - note the Chinese characters above the door.

Lauvergne was one of several artists accompanying the 1836 - 1837 Auguste-Nicolas Vaillant (1793 - 1858) circumnavigation. The scientific expedition arrived in Singapore on February 17, 1837 and stayed through February 23rd. It is safe to assume that Lauvergne sketched this view during the expedition's brief stay.

This view was originally drawn by Barthélemy Lauvergne in 1837. The view was not published until about 1840, when it was printed for the Album Historique, a collection of maps and views prepared to accompany Auguste Nicholas Vaillant's Voyage Autour du Monde exécuté pendant les années 1836 et 1837 sur la Corvette la Bonit. The Album Historique must have been issued in much smaller quantities than the Voyage Autour du Monde, as it is exceedingly rare, whereas the narrative is only somewhat rare. This view was engraved by Jean Louis Tirpenne. It was printed by Lemercier, Benard et Cie., Paris. The view was published jointly by Arthus Bertrand (1840 - 1866) in Paris and Ackermann in London.


Jean Louis Tirpenne (August 26, 1801 - January 17, 1867) was a French-German painter, lithographer, and dramatist active in Paris in the mid-19th century. Tirpenne was born in Hamburg, Germany. He studied painting under Boutron. Tirpenne contributed to the lithographic work associated with the Auguste-Nicolas Vaillant (1793 - 1858) circumnavigation, particularly with regard to the work's views of Singapore. He died in Paris in 1867. Learn More...