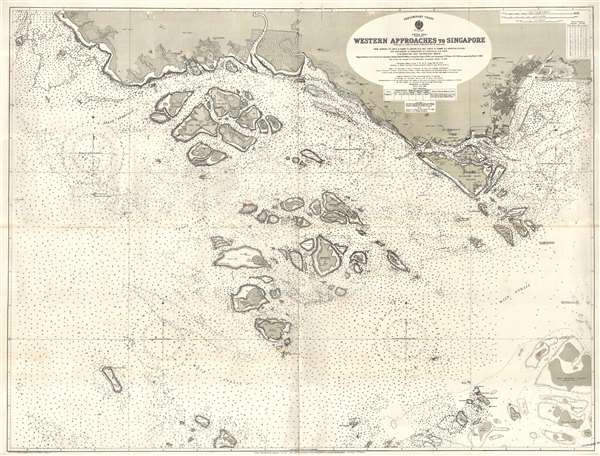 A rare 1923 British Admiralty nautical chart illustrating southern coast of Singapore Island, the city of Singapore, and its western approaches. The chart properly covers from Singapore to Pulau Merambong. It is the result of Royal Navy surveys completed between 1909 and 1912, with updates to February 19 of 1923. Among other details, it offers exceptional coverage of Singapore city, identifying important buildings and an early street grid. Many of the port improvements associated with the Singapore Strategy are also evident.

As this map was being printed, Singapore became central to the Singapore Strategy, a naval defense policy instituted by the British Empire between 1919 and 1941. Following World War I (1914 – 1918), it became apparent that the Royal Navy was facing challenges to its long established supremacy by the rising naval forces of the United States and Imperial Japan. While the growing U.S. Navy, being a strong ally, was not a serious cause of concern, it quickly became apparent that the Imperial Japanese naval buildup would clash with British interests in the Far East.

The British determined to establish a 'Gibraltar of the East,' zoning in on Singapore for its exceptionally strategic position. Starting work in 1919, the British began a series of extensive improvements to the port as an expense of some 500,000 GBP. Completed over the subsequent 20 years, Singapore was outfitted with largest dry dock in the world, the third largest wet dock, and enough fuel tanks to support the entire Royal Navy for six months. The island's defenses also included an enormous Royal Air Force base and mounted 15-inch stationary guns. Despite what appeared to be highly defensible position, when hostilities finally broke out between the British Empire and Imperial Japan, in 1942, Singapore fell to Japanese invaders after just 15 days of fighting, an event described by Prime Minister Winston Churchill as the 'worst disaster and largest capitulation in British history.'

This chart is quite rare. We have been able to isolate only one other example at the National Library of Singapore.