1860 U.S. Coast Survey Map of the New England Coast from Connecticut to Maine 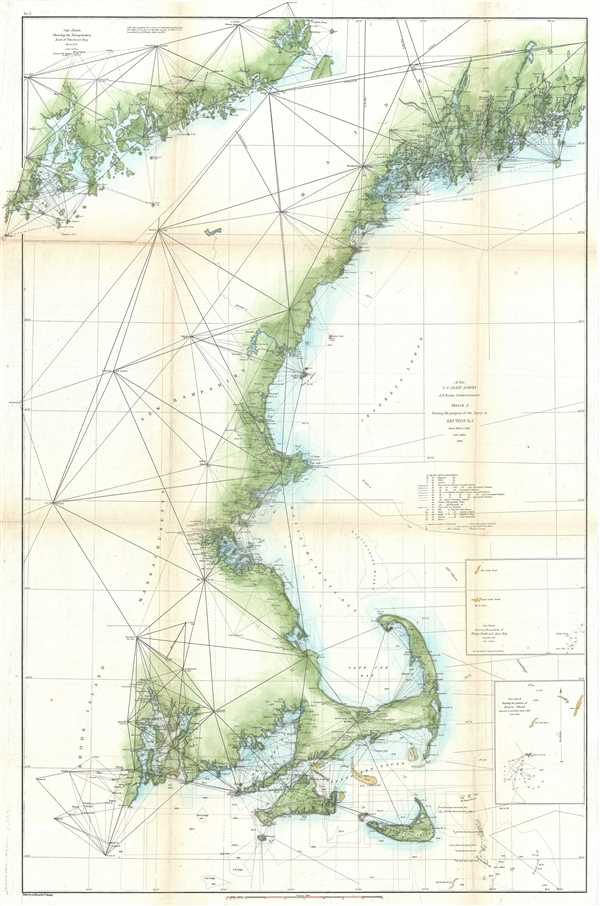 1860 U.S. Coast Survey Map of the New England Coast from Connecticut to Maine

Details the coast of New England from Narragansett Bay to Casco Bay, including Cape Cod, Martha's Vineyard, and Nantucket.

This is an attractive example of the 1860 U. S. Coast Survey map or triangulation chart of the New England coastline. It covers the coast from Newport (Rhode Island) eastward past Martha's Vineyard and Nantucket, then north to Cape Cod, Boston Harbor, Cape Anne, Portsmouth (New Hampshire) and Portland and Muscongus Bay, Maine. It includes Boston City and Harbor, Salem, Provincetown, Cape Ann, Gloucester, Newburyport, Portsmouth and Portland, among other towns. A large inset in the top left quadrant details the coast of Maine eastward from Penobscot Bay to Grand Manan Island. A small inset in the lower right quadrant includes a sub-sketch showing the position of Davis' Shoal, discovered by the U.S. Coast Survey in 1846, while another inset features a sub-sketch showing the position of Phelps' bank and Asia Rip. Various triangulation points used in setting up the survey are shown. From a nautical perspective the map offers a wealth of information on shoals, current and light houses. This chart was prepared under the supervision of A. D. Bache, one of the most influential Superintendents in the history of the Coast Survey, and issued for the 1860 Superintendent's Report.