1857 U. S. Coast Survey Chart or Map of the Carolina and Virginia Coast 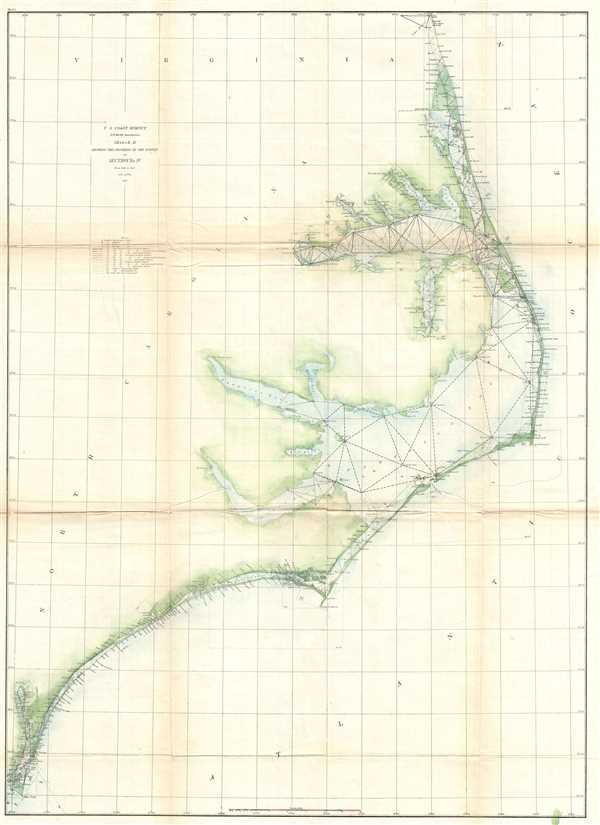 1857 U. S. Coast Survey Chart or Map of the Carolina and Virginia Coast

Incredible hand colored chart or map of the Outer Banks of North Carolina.

This is an exceptional example of the 1857 U.S. Coast Survey's progress chart for the coasts of Virginia and North Carolina. The map depicts from Cape Henry, Virginia, south past the Pamlico Sound and Cape Hatteras, to Cape Fear. It was here, looking over the Pamlico Sound, that Giovanni de Verrazano proudly and foolishly declared that he had discovered a route to the Pacific. Triangulation points are present throughout the region as well as all major islands, rivers, and inlets, including the Outer Banks. Albemarle Sound and Pamlico Sound are illustrated in full. Several coastal cities are labeled. Lighthouses, rivers, beaches and other sites identified.

Progress maps of this sort were made to illustrate work of the survey and accompanied the Superintendent of the Survey's annual report to Congress. Prepared under the supervision of A. D. Bache, one of the most influential and prolific Superintendents of the Coast Survey, and issued in the 1857 edition of the Superintendent's Report.