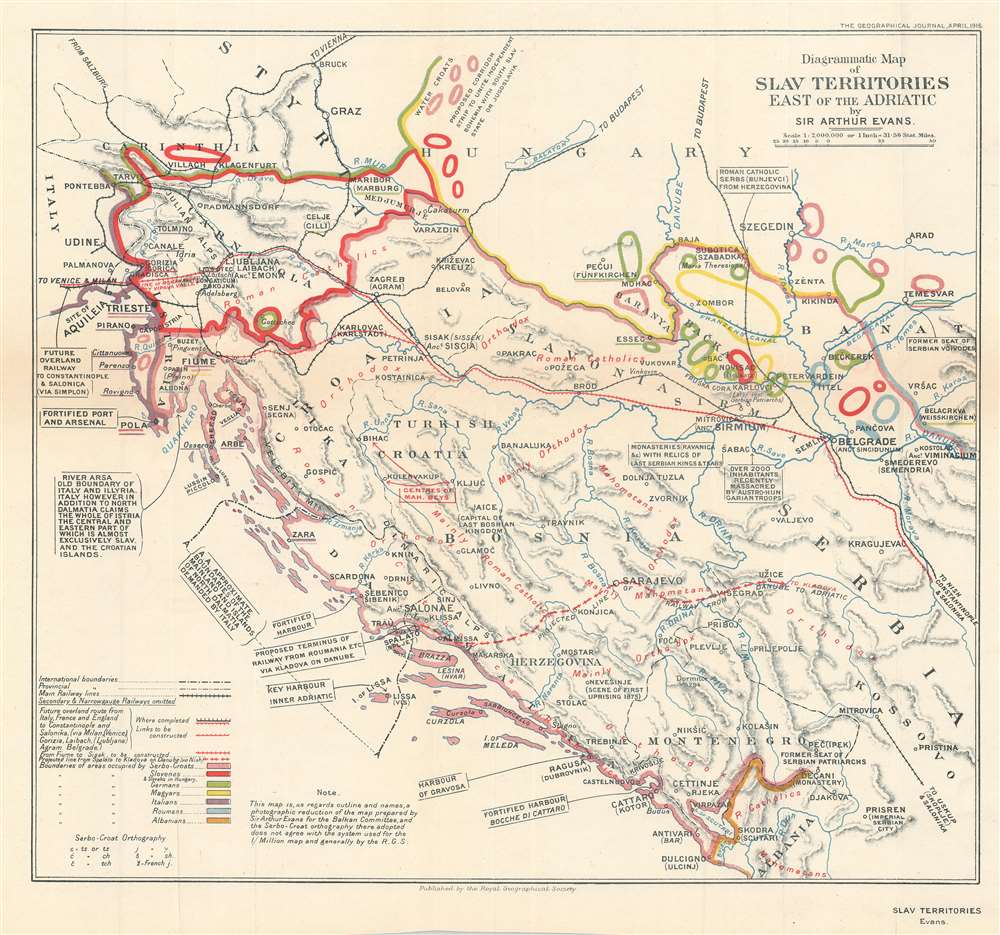 Details the ethnic tensions that resulted in World War I.
$200.00

This is a 1916 Arthur Evans ethnographic map of Yugoslavia. Depicting the region from Italy and the Adriatic Sea to Belgrade and from Graz to Albania, Evans employs color coding to identify areas inhabited by different ethnic groups. He differentiates between Serbo-Croats, Slovenes, Germans, Magyars, Italians, Roumans, and Albanians. Red lettering also marks regions by the dominant religions: Islam, Orthodox, and Roman Catholicism. Ethnic and religious strife had roiled this region since at least the late 19th century and, along with nationalistic desires, directly led to the outbreak of World War I.

This is a reduced version of a map created by Arthur Evans and was published in the April 1916 edition of The Geographical Journal. Four examples are cataloged in OCLC and are part of the institutional collections at Yale University, Stanford University, the University of London Senate House Library, and The British Library.

Arthur Evans (July 8, 1851 - July 11, 1941) was an English archaeologist and power player most often remembered for discovering the palace of Knossos on Crete. He also played a significant role in the formation of Yugoslavia. Born in Nash Mills, England, Evans attended some of Britain's most prestigious preparatory schools and then entered Brasenose College, Oxford, in 1870, and graduated in 1874. During the summers of his time at Oxford, Evans traveled extensively, and further cultivated his interests in archaeology and classical history. After some acrobatics orchestrated to graduate (he had 'studied' modern history, even though his interests lay elsewhere), Evans went to Germany for further study, but soon left in favor of further exploration in the Balkans, which were in the midst of a civil war. After returning home, Evans wrote of his time in the Balkans and published them as Through Bosnia and Herzegovina. This work, published in two editions, made him an expert on the Balkans overnight. The Mancheste4r Guardian hired him as a correspondent based on his newfound expertise, and sent him back to the Balkans in 1877. There he married the eldest daughter of one of his mentors, Margaret Freeman, in 1878, and the couple lived happily in Ragusa until 1882. He was arrested in 1882 on suspicion of being a British agent provocateur. He spent six weeks in jail, but, when nothing difinitive could be proved at trial, he was expelled from the country. This forced Evans and Margaret to return to Oxford in January 1883. By early 1884, he was appointed Keeper of the Ashmolean Museum, an institution that was undergoing a period of significant turmoil. Under Evans' leadership, the museum found an identity, firmly becoming an archaeology museum, and today it houses the finest collection of Minoan artifacts outside Crete. It was during his time at the Ashmomlean that Evans became a true archaeologist. However, this period also brought tragedy, after Margaret died in Italy on March 11, 1893. The following year, after being kept apprised of events on Crete, he finally felt 'compelled' to go after discovering that some artifacts in the Ashmolean's collection likely bore Cretan script. Upon his arrival, he became convinced of this fact, bought 1/4 of the site, and quickly returned to England to wrap up his affairs there. Seven years later, after the political situation stabilized on Crete, Evans began excavations, and within a few months had discovered parts of the Palace of Minos. He spent the next eight years on Crete studying Minoan society. In 1908 he resigned as Keeper to focus on publishing his Minoan work. In 1914, at the beginning of World War I, he was 63 years old and thus too old to enlist. He agreed to become President of the Society of Antiquaries, which also made him a Trustee of the British Museum. He spent the war years successfullyt fighting the War Office and kept them from commandeering the British Museum for the Air Board. Learn More...

Evans, A., 'The Adriatic Slavs and the Overland Route to Constantinople.' The Geographical Journal. Vol. 47, No. 4 (London: Royal Geographical Society) 1916.