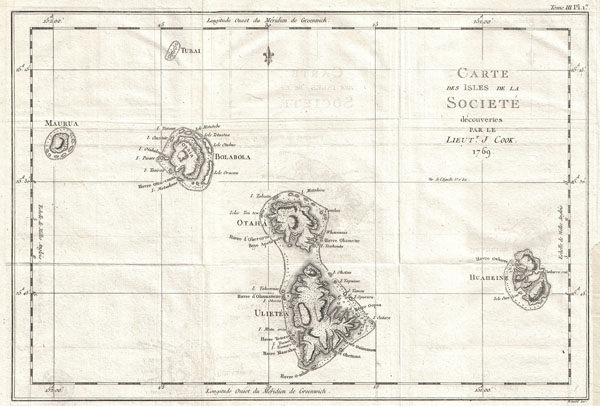 This is a fine example of the first published map of the Society Islands, composed by James Cook on his first voyage. Consists of the islands of Maurua, Tubai, Bolabola, Otaha, Ulietéa and Huaheine. This group was identified by Cook in 1769, when he wrote in his journal, 'So call'd by the Natives and it was not thought advisable to give them any other names but these three together with Huaheine, Tubai, and Maurua as they lay contiguous to one another I have named Society Isles .' Offers considerable detail on each of the island, attempting to show reefs, mountains, valley, topographical features and, occasionally, depth soundings. Engraved by Bernard for the 1774 French edition of John Hawkesworth's Account of the Voyages…, in which this was contained as Plate 1 in Volume III.