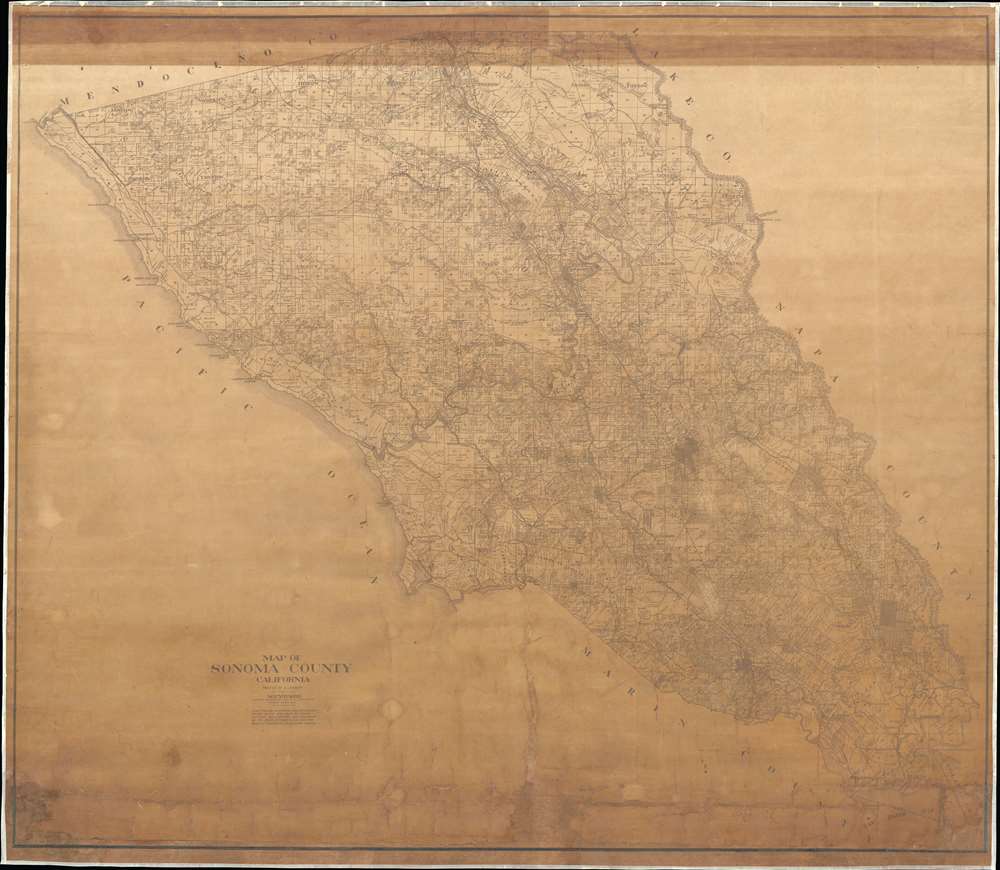 A monumental and detailed 1908 Malcolm Phillip Youker map of Sonoma County, California, the heart of California's famed wine country. Depicting the entirety of Sonoma County, individual ranches, farms, and homesteads are delineated throughout. Each is identified by the owner's last name and acreage owned. Other land tracts, such as those owned by the Empire Redwood Company or the Bender Mill and Lumber Company, are labeled as such. The towns of Sonoma, Petaluma, Sebastopol, and Santa Rosa are identified.

Today, Sonoma County makes up part of California's celebrated wine country and is the state's largest wine-producing region. Sonoma boasts Eighteen American Viticultural Areas and over to over 350 wineries.

This map was created by Malcolm Phillip Youker and George H. Winkler in 1908. The present example, which is printed, is stated to be an 'exact tracing of official map of Sonoma County' executed by Z. Lambert. An example is cataloged in OCLC and is part of the collection at the University of California Davis.

Malcolm Phillip Youker (1886 - April 27, 1967) was an American civil engineer. Born in Santa Rosa, California, Youker was born into a pioneer Santa Rosa family and grew up on the family's Spanish land grant ranch in Rincon Valley called Rancho de Las Cabezas. He graduated from Stanford with a degree in civil engineering and served two terms as Sonoma County surveyor. He then moved to Tulsa, Oklahoma, where he worked for the Bureau of Mines and also spent fourteen years as a vice president at Phillips Petroleum. He served as petroleum administrator for the West Coast during World War II. He retired to the family ranch in Rincon Valley before moving to Fortuna, California, where he died. He was married to his wife Neva Youker, with whom he had four children. Learn More...


George H. Winkler (June 5, 1872 - July 23, 1911) was an American civil engineer. Born in the Green valley of California, Winkler attended public schools before studying civil engineering at the University of California. After graduation, Winkler found a job working in the Sonoma mines. He joined the U.S. Engineering Corps in June 1898 and was sent to Honolulu, where he worked until he was discharged in November 1899. He then moved to Mexico, where he worked on the construction of the Kansas City, Mexico, and Orient Railroad from June 1900 until January 1906, when he returned to California. He was elected as Sonoma County Surveyor in November 1906 and reelected in 1910. Winkler married Maybel Parker on February 29, 1908. Learn More...

Average. Map exhibits areas of severe toning, as well as some loss and soiling. Professionally stabilized.