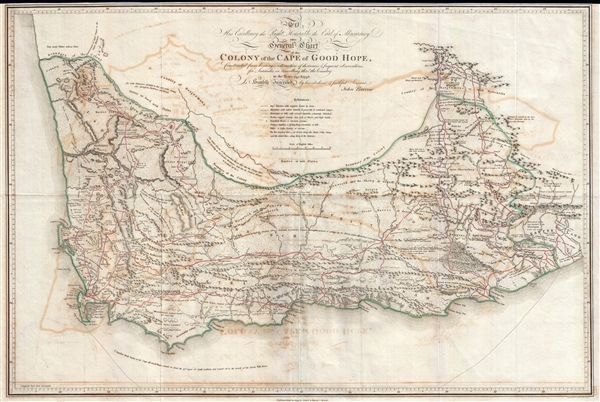 Considered to be the first scientific mapping of South Africa, this is a fine example of John Barrow's scarce General Chart of the Colony of the Cape of Good Hope. The map covers the southern tip of Africa from the River Koussie to the Great Fish River and as far north as the Orange River sources in modern day Lesotho. Although not a trained cartographer, Barrow drew this map based upon his extensive travels between 1797 and 1798 wherein he was charged with surveying the area on wagon and by food as well as negotiating a reconciliation between Boers, Hottentots, and Kaffers, who were disputing territory. Barrow's routes are well defined throughout. The map presents a rich land, well-watered with great rivers, and teaming with animal life. Despite this, Barrows experience negotiating with the population led him to write, More than 10 years later William John Burchell (1782 – 1863) took Barrow's map with him on his own expedition into the South African interior. He had little good to say about Barrow's work,

Its geographical deficiencies are so numerous, that in order to give it some appearance of a map the compiler of it has been reduced to the necessity of spreading it over with scraps of information taken from the text, and with lists of wild animals. Nonetheless, Burchell used Barrow's map as the base of his much improved map of the region.

The map was engraved by Samuel Neele and published by Cadell and Davis to accompany Barrow's An Account of Travels into the Interior of Southern Africa, in the Years 1797 and 1798.

John Barrow (June 19, 1764 – November 23, 1848) was an English statesman, cartographer, and writer active in the late 18th and early 19th centuries. Barrow was born in the village of Dragley Beck, in Ulverston, Cumbria. His first recorded work was as a superintending clerk at a Liverpool iron foundry, but by his early 20s, transitioned to teaching mathematics at a private school in Greenwich. One of his pupils, the young son of Sir George Leonard Staunton, favored him and he was introduced to Lord George Macarteny. Barrow accompanied Macartney as a comptroller of household, on his 1792-1794, embassy to China. Having acquitted himself well, Barrow was hired by Macartney as private secretary on a political mission to the newly acquired Cape Colony, South Africa. Barrow was given the difficult task of reconciling Boer settlers with the indigenous African population. In the course of this voyage he traveled throughout the Cape Colony, coming to know that country well. There he married botanical artist Anna Maria Truter, and, in 1800, acquired a home with the intention of settling in Cape Town. Following the 1802 Peace of Amiens, the British surrendered the colony and Barrow returned to England where he was appointed Second Secretary to the Admiralty, a post he held with honor for the subsequent 40 years. In his position at the Admiralty Barrow promoted various voyages of discovery, including those of John Ross, William Edward Parry, James Clark Ross, and John Franklin. The Barrow Strait in the Canadian Arctic as well as Point Barrow and the city of Barrow in Alaska are named after him. He is reputed to have been the initial proposer of St Helena as the new place of exile for Napoleon Bonaparte following the Battle of Waterloo in 1815. He was a member of the Royal Society and the Raleigh Club, a forerunner of the Royal Geographical Society. In 1835 Sir Robert Peel conferred upon him a baronetcy.


Samuel John Neele (July 29, 1758 - May 13, 1824) was a prolific British map engraver active in the late 18th and early 19th centuries. Neele apprenticed as a printer and engraver with Harry Ashby from about 1781 to 1782 before establishing himself independently in 1785 at 352 Strand, London. The combination of business acumen and technical skill make Neele extremely successful with literally hundreds of maps to his credit. His vast corpus is composed of notable maps by most major English publishers of the period including, Haywood, Faden, Wallis, Stockdale, Arrowsmith, Thomson, and Greenwood, among others. Neele's sons, James and Josiah Neele, also engravers, took over their fathers business around 1818, both becoming notable in their own right.

Very good. Wear and light verso reinfordcement here and there on original fold lines. Some Transferrence.