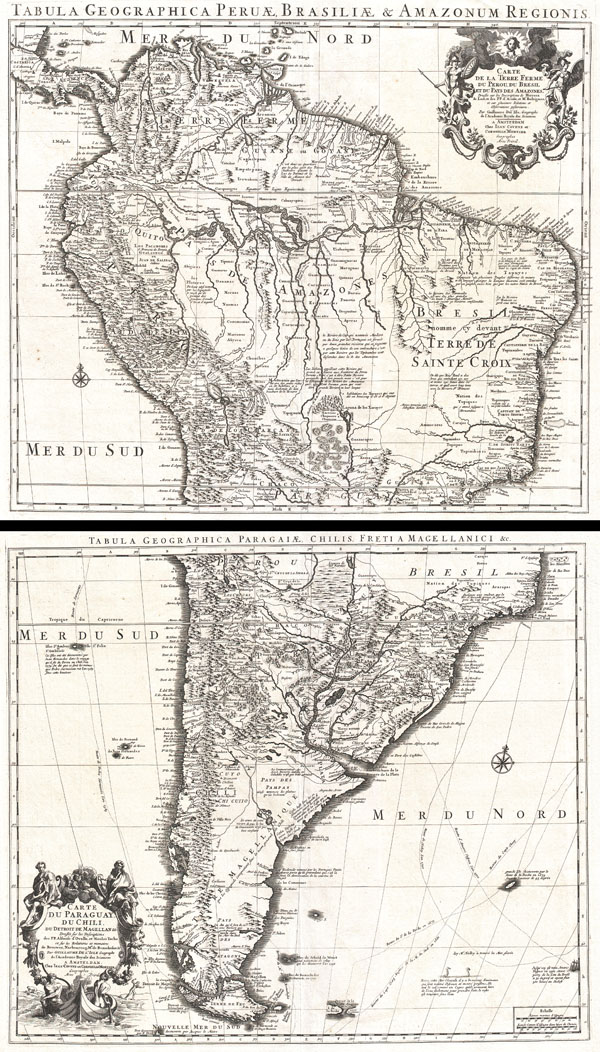 The northern sheet of this set, like most early maps of the area, contrasts a detailed mapping of the coast with a speculative discussion of the interior, particularly the Amazon Basin. Offers a fairly accurate mapping of both the east and west coasts with exceptional detail in the populated Andean regions of Columbia, Ecuador (Labeled Quito), and Peru. Notes Cuzco, Lima, Quito, Valladolid, Arequipa, Trujillo and other important trading centers of the region. In Portuguese controlled Brazil, Rio de Janeiro, San Salvador and San Sebastian are noted. Lake Maracaibo, in modern day Venezuela, is slightly malformed and elongated.

The interior is where this map gets interesting. De L'lsle was a cautious and scientific cartographer, who based his maps on the first hand reports from sailors, merchants and missionaries that, at the time, were flowing into Paris at an unprecedented rate. Consequently many of his maps offer significant cartographic advances over their predecessors. This map is no exception and De L'Isle credits the mappings and explorations of Alonzo de Herrera, Johannes de Laet, P.P. D Acuna and M. Rodriguez. Nonetheless, De L'Isle's mapping of South America's interior is full of inaccuracy, curiosities, and ample fodder for the gold hunting European. Our survey of this map begins with De L'Isle's impressively accurate mapping of the Amazon and Orinoco River systems - though he does erroneously connect the two, an understandable error common to maps of the period. Roughly where the Grand Sabana is today, in modern day Venezuela, De L'Isle speculates the location of Lake Parima and the city of El Dorado (curiously this is actually gold rich region though difficult to access and mine). Further South he notates numerous gold rich indigenous groups including Los Plateros and Xarayes.

The Xarayes, a corruption of 'Xaraiés' meaning 'Masters of the River,' were an indigenous people occupying what are today parts of Brazil's Matte Grosso and the Pantanal. When Spanish and Portuguese explorers first navigated up the Paraguay River, as always in search of El Dorado, they encountered the vast Pantanal flood plain at the height of its annual inundation. Understandably misinterpreting the flood plain as a gigantic inland sea, they named it after the local inhabitants, the Xaraies. The Laguna de los Xarayes almost immediately began to appear on early maps of the region and, at the same time, almost immediately took on a legendary aspect. Later missionaries and chroniclers, particularly Díaz de Guzmán, imagined an island in this lake and curiously identified it as an 'Island of Paradise,'

To the north of the 'Island of Paradise' appeared the 'Puerto de los Reyes' which was considered to be a gateway to the Amazon and the Kingdom of El Dorado. De L'Isle, to his credit, shows the 'Laguna' and it's island in a much reduced form compared to earlier cartographers. He also correctly does not connect the Paraguay River to the Amazon system.

The southern sheet of this two map set, like its northern counterpart, exhibits a detailed coastline reflecting a fairly accurate early mapping of the region. The relatively easy navigation along the Rio de La Plata and its tributaries, as well as the relative narrowness of the continent and accessibility of the Pampas, offered ample opportunity for easy mapping. Here De L'Isle attributes his map to the explorations and descriptions of this region provided by Afonso de Ovalle and Nicholas Techo. Like the northern sheet, this map also shows the mythical Laguna de Zarayes, though here it is spelled Xaraies and does not include the 'Island of Paradise.'

Further south, De L'Isle suggests that the Santa Cruz River, or the 'Rio St. Julien' as it is labeled here, connects (or nearly so) with the Rio de la Campana coming from the Pacific, thus connecting the Atlantic to the South Seas via an easy overland river route. The idea of a river route transversing Patagonia caught the European imagination in the early 18th Century. The writer Daniel Defoe proposes a similar route further north in his book A New Voyage and such concepts appeared in several maps of the period including Herman Moll's important map of the South Sea Company. Of course, the Andes were in fact an indomitable barrier and short of the treacherous Strait of Magellan itself, no such water route existed.

Some of the most interesting elements of this map appear far from the mainland in the surrounding seas. The routes of several important explorers are indicated including Pedro Sarmiento in 1589, La Roche in 1675, Halley in 1700, Amerigo Vespucci in 1502 and Captain Charp in 1681. The Falklands are depicted in an embryonic form as identified by Captain La Roche in 1575. Also notes Francis Drake's discovery of Cape Horn. In the lower right hand quadrant there are two interesting images of stylized penguins accompanied with a description in French, probably attributable to the explorer Lozier Bouvet, so charming that I felt obligated to translate and include here,

In this Glacial Sea there are many animals that are half bird and half fish; on the surface they pass like a swan coming out of the water only to take the air, the rest is always under water.

Also in the lower right quadrant Amerigo Vespucci's ship appears as he crosses into the Western Hemisphere. Slightly to the northwest of this little ship another island appears, supposedly discovered by La Roche in 1675, and is mostly likely a mis-mapping of South Georgia Island.

Altogether this is a spectacular map set in extraordinary condition. Stands up to hours of perusal and presents dramatically.

Incredible. A nearly flawless example of these two rare maps. We have rarely seen any 18th century maps in such phenomenal condition. Wide clean margins. White clean paper. Dark heavy impression. Original centerfold - as issued. If you plan to add an example of this map to your collection, then this is the one you want.