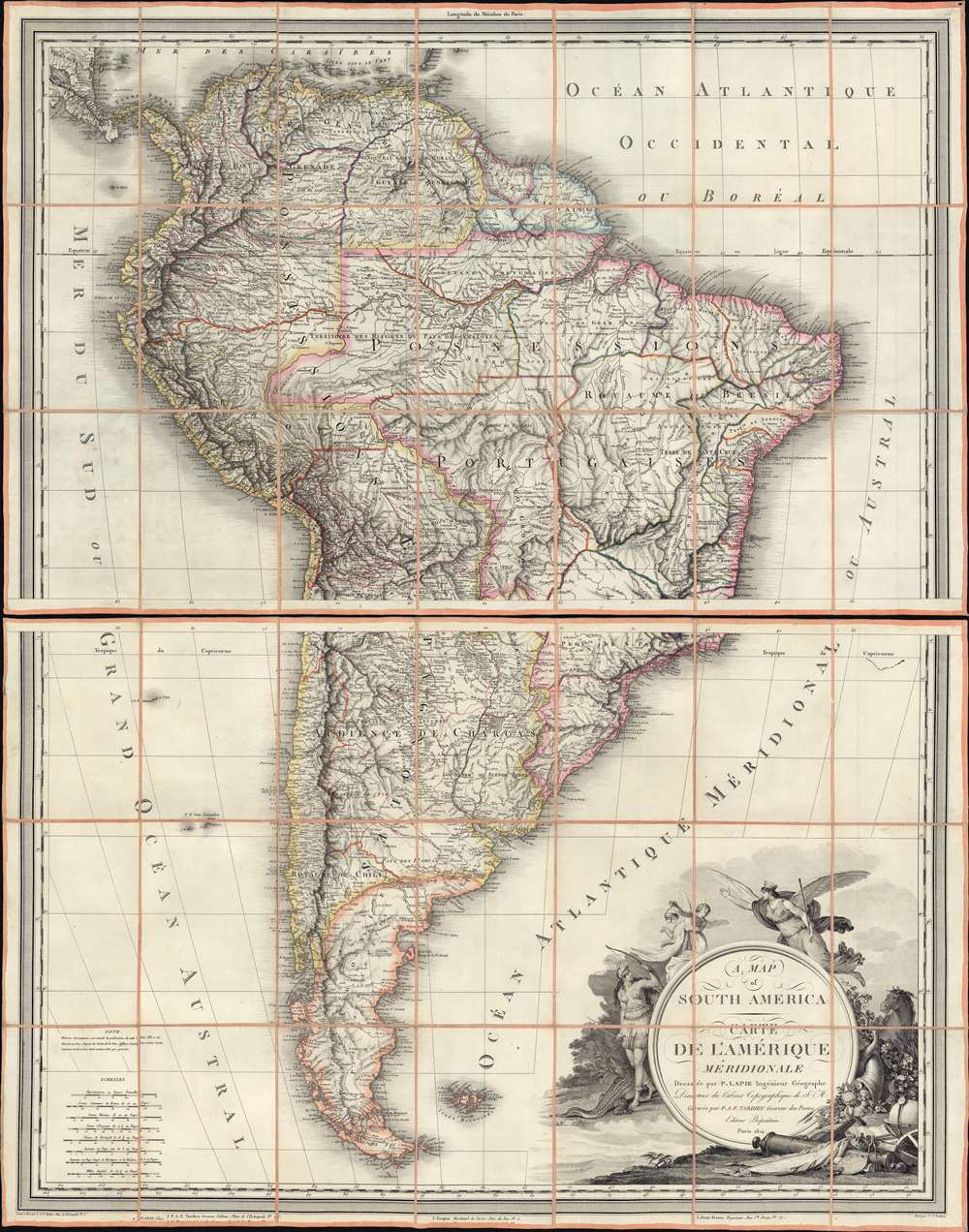 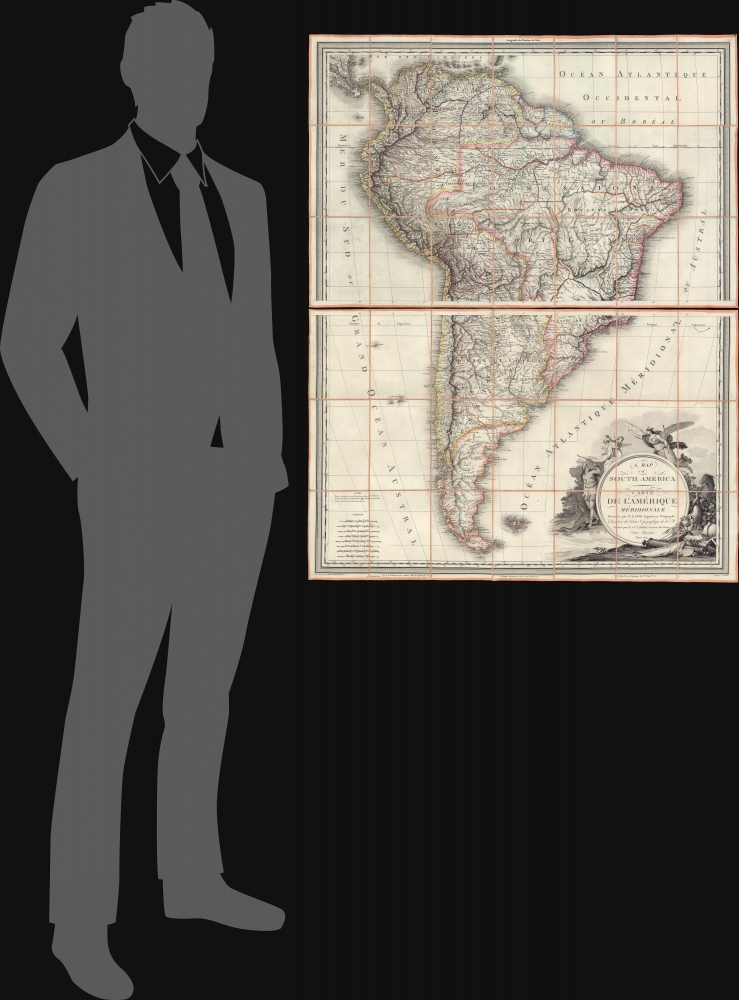 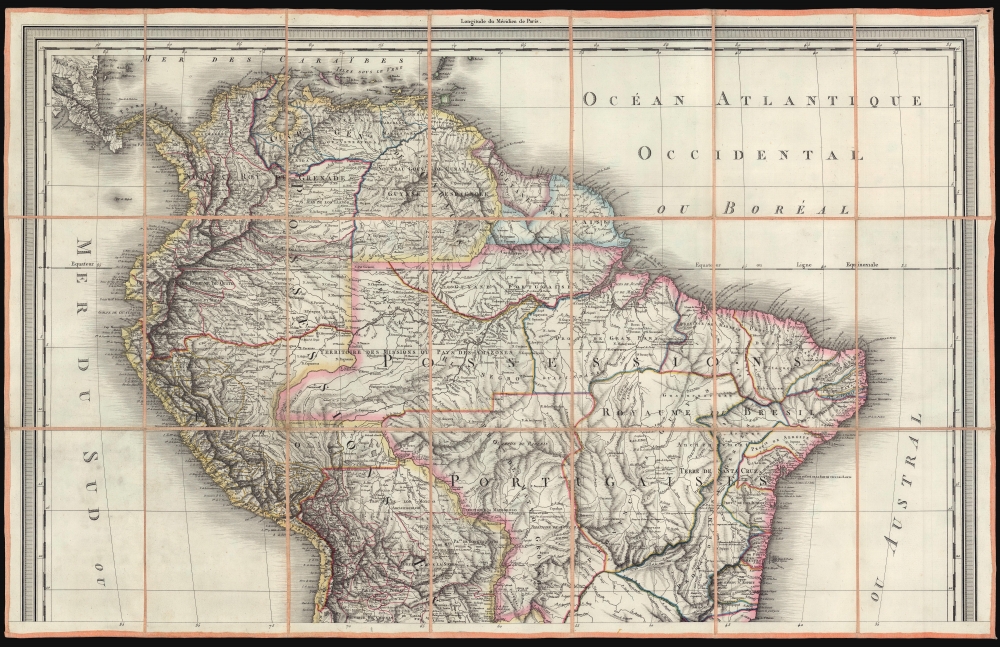 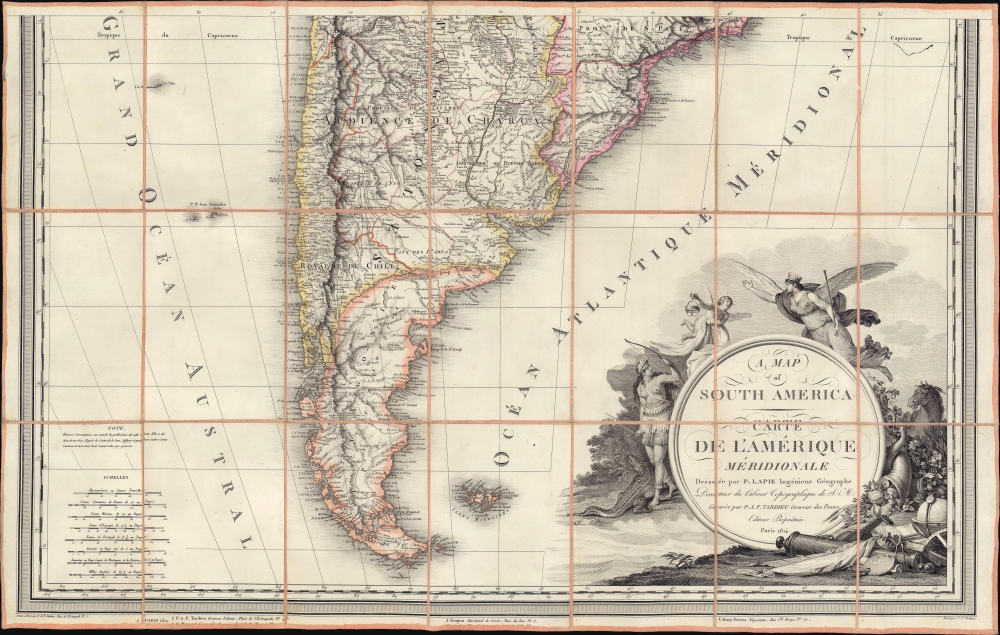 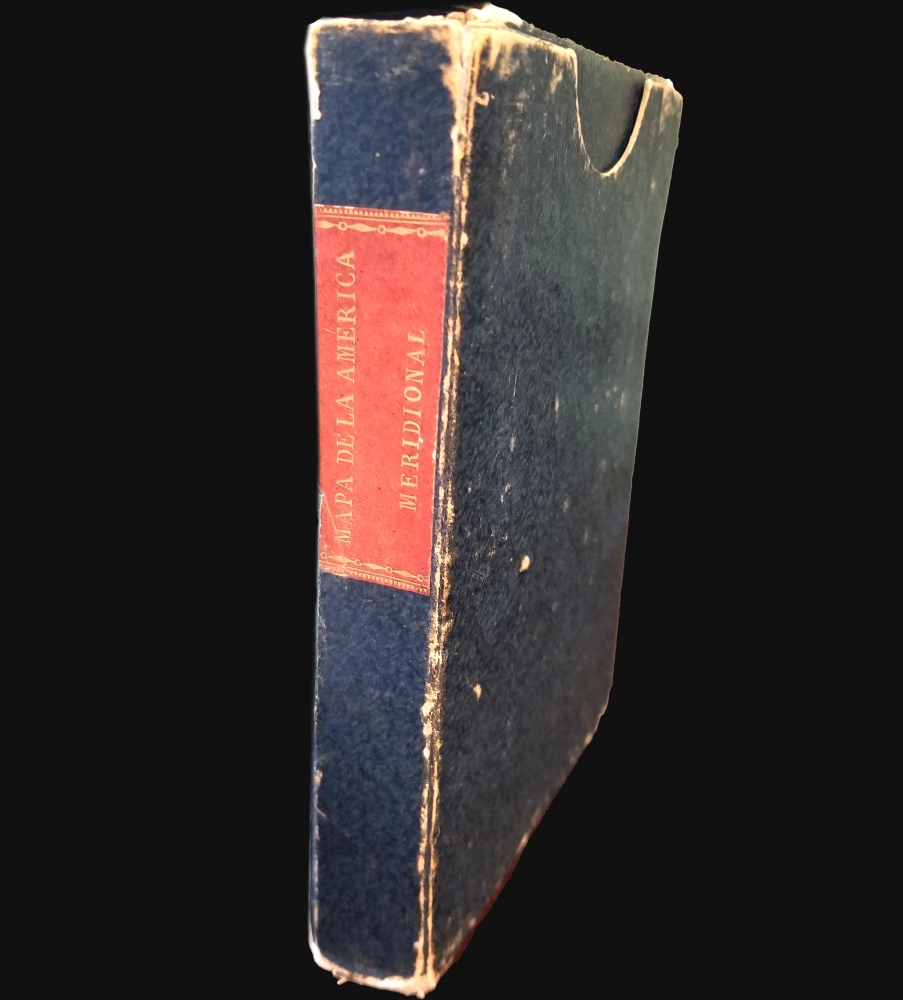 A striking and expansive two-section 1814 case map of South America issued by Pierre Lapie. Appearing at the height of the Spanish American Wars of Independence (1808 - 1833), the map depicts all of South America and serves as a general update on the groundbreaking cartography of Juan de La Cruz Cano y Olmedilla. Although titled in both England and French, the content is entirely in French. The map features striking overall engraving, but the allegorical cartouche is of special note, being the work of legendary engraver Jean-Michel Moreau. The map was initially engraved during the 1807 French invasion of Spain, but not published until nearly seven years later, in 1814, following War of the Sixth Coalition (March 1813 - May 1814) and Napoleon's exile to Elba.

A Time of Transition in Latin America

The period when this map was made, between 1807 and 1814, witnessed the independence and transformation of South America. Napoleon successfully conquered Spain in 1807, deposing King Fernando VII and installing his brother, Joseph Bonaparte, on the Spanish throne. Criollos in Latin America, far from Napoleon's direct influence, felt no loyalty to the French emperor, instead taking the opportunity to pursue their own ambitions for independence. Through a series of wars and insurrections led by Libertadores Simon Bolivar, José de San Martín, and others, South America gradually threw off the yoke of Spanish colonial suzerainty. While for a time there was hope for a unified Latin American government, most of the former colonies fell to infighting, leading to the bloody Paraguayan War (1864 - 1870) and the War of the Pacific (1879 - Oct 20, 1883), among others. The map here fails to recognize the independence of Paraguay (1811) or Uruguay (c. 1813), and continues to identify most South American countries according to their colonial nomenclature - underscoring that France did not recognize the legitimacy of the revolutions.

The allegorical cartouche is of special note, as it is the work of master engraver Jean-Michel Moreau, one of the greatest French engravers of his generation. The title is on a medallion set upon a field littered with the detritus of conquest, including a canon, battle standard, fallen crown, and cartographer's tools (globe, paintbrush, compass). On the left side of the medallion, an American Indian woman stands next to a crocodile while holding aloft a bow - representing the Enlightenment ideal of the noble savage. Above a Putti bearing an unusual device flies to meet an angelic herald bearing a scepter, symbolizing both righteousness and regal authority. The herald stands in sharp contrast to the native American woman. Both are female. One is unclothed, rooted to the earth, a warrior, and stands next to a dangerous crocodile - symbolizing America. The other is fully-clothed, winged, crowned, and European. The message is clear: Europe brings knowledge and wisdom to, and with it sovereignty over, America.

This map was issued in 1814 by Pierre Lapie. It was engraved by Pierre Antoine-Francois Tardieu. The cartouche in the lower right is the special work of master engraver Jean-Michel Moreau. While a separate issue, Lapie issued a partner map in a similar style of North America around the same time. A note in the lower right suggests that this map was compiled in 1807 but 'diverse circumstances', doubtless referring to the Napoleonic Wars (1803 - 1815), delayed its publication. It also notes that the chart is based on the cartography of Juan de La Cruz Cano y Olmedilla, Thomas Jefferys, 'et quelques autres cartes'. The map is represented in six European institutions and is extremely rare to the market.


Pierre Antoine-François Tardieu (February 17, 1757 - January 14, 1822), also known as Tardieu de l'Estrapade, for his address at Place de L'Estrapade, was a French geographical engraver and publisher active in Paris during the late 18th and early 19th centuries. A member of the large and prolific Tardieu family, which, for over 200 years, produced multiple skilled and active engravers. A disciple of his uncle Pierre-François Tardieu, in his youth Antoine-Francois would sign his works Pierre-François (or P.F. Tardieu; 1711 - 1771) , but later in his career began using his own name or (P.A.F. Tardieu). His two sons, Pierre-Antoine Tardieu and Ambroise Tardieu (1788 - 1841), both became noted geographical engravers in the own right. Learn More...


Jean-Michel Moreau (March 26, 1741 - November 30, 1814), a.k.a. Moreau le Jeune ('the younger'), was a French draughtsman, illustrator and engraver active in Paris in the late 18th and early 19th century. Moreau was born in Paris where he studied painting and engraving under Louis-Joseph Le Lorrain (1715 - 1760). When Le Lorrain became the first director of the Saint Petersburg Academy of Fine Arts, the pair relocated to St. Petersburg, remaing until Le Lorrain's sudden death in 1760. Moreau returned to Paris, where he took work with the engraver Jacques-Philippe Lebas, for whom he engraved reproductions of old master drawing and etchings. He became well known for engraving mastery, catching the attention of the royals. In 1770 Moreau succeeded Charles-Nicolas Cochin (1715 - 1790) as chief Dessinateur des Menus Plaisirs du Roi and was later appointed Dessinateur et Graveur du Cabinet du Roi. Despite his royal appointments, Moreau was sympathetic to the French Revolution and weathered the associated violence easily. With the Bourbon restoration in 1814, Louis XVIII appointed him once again to a royal office, but he died shortly thereafter. Learn More...


Juan de la Cruz Cano y Olmedilla (May 14, 1734 - February 13, 1790) was a Spanish cartographer, geographer, and academician active in Madrid in the late 18th century. Juan was born in Madrid. In 1752 Juan was sent to Paris with fellow cartographer Tomás López de Vargas Machuca (1730 - 1802) to study map engraving under the great French geographer Jean Baptiste Bourguignon d'Anville (1697 - 1782). While there he and Lopez published 1755 map of the Gulf of Mexico. He remained in Paris through 1760, when he became a member of the San Fernando Academy. He was also an honorary member of the Basque Society of Friends of the Country. In 1765, he was contracted by Paul Jerome Grimaldi and Pallavicini (1710 - 1789), the Marquis de Grimaldi, to complete a massive remapping of South America. This map, issued in 1775 and again in 1802, became the definitive map of South America, informing all subsequent maps and most political decisions on the continent until the late 19th century. Today just 8 examples survives, most in the Archivo General de Indias de Sevilla. Learn More...