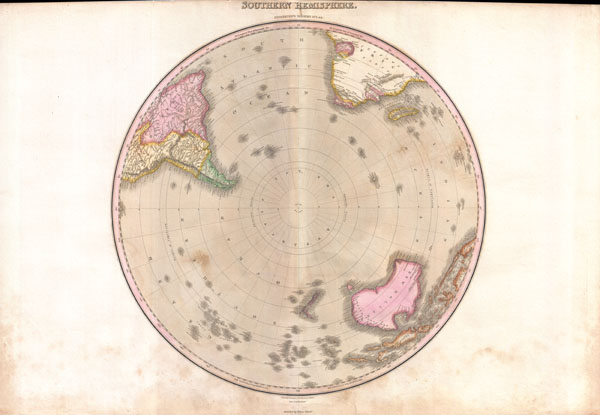 Uncommon transitional map of the Antarctic with no Southern Continent.

A rare and important 1818 map of the Southern Hemisphere by John Pinkerton. On a Polar projection, this map depicts Australia, Polynesia, and the parts of South America and Africa. This map was issued after the search for Terra Australis, or the Great Southern Continent, had been abandoned, but prior to the discovery of Antarctica - consequently the South Pole is depicted as a vast ocean called 'Icy Sea.'

In the more populated lands to the north, this map offers fairly accurate shorelines throughout. In Africa, the interior remains unexplored except for the Congo, the Cape Colony and the gold mining regions of Monomotapa. Similarly, the coasts of Australia are accurate but the interior is vague and unknown.