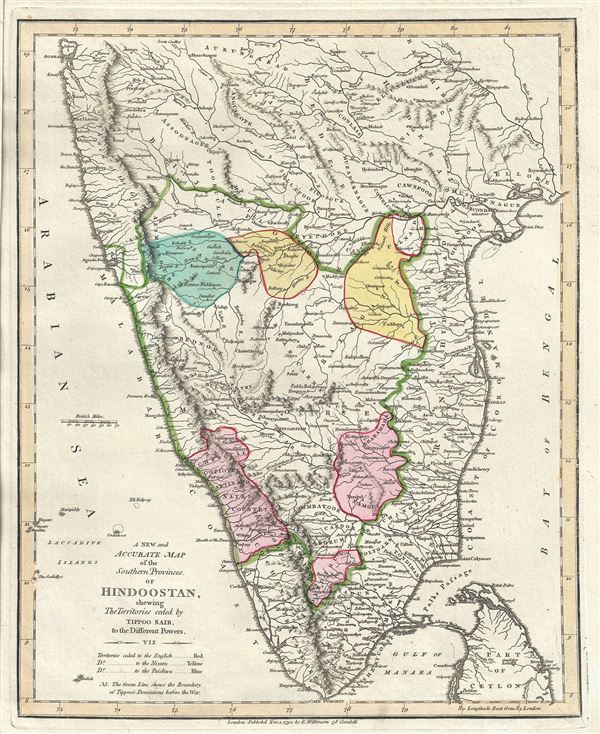 This is a scarce and beautiful 1791 map of southern India by Robert Wilkinson. It covers from Bombay or Mumbai to Cape Comorin. This exquisite map is absolutely invaluable for those interested in colonial or Indian history, as it shows the boundaries of the territories ceded by Tipu Sultan to the British, Nizam, Maratha or Paishwas following his defeat in the Third Anglo-Mysore War. It also shows the boundaries of Tipu's dominions before the war.

Tipu Sultan was one of India's great, forward thinking leaders, tolerant of Hindus, a supporter of engineering and science, and intolerant of the increasingly imperialistic British. Famously, Tipu kept a dream journal in which he records, among many startling images, a dream in which he was a tiger, attacking and eating a British soldier. This image became his emblem, and appears in sculptures and images of the time. Like his father, Tipu allied with the French to try to drive the British out, but was ultimately outgunned by England's superior weaponry. He died in 1799 defending his capital Srirangapatna during the Fourth Mysore War.

This map was engraved by Thomas Conder and issued as plate no. 37 in the 1792 edition of Robert Wilkinson's General Atlas.