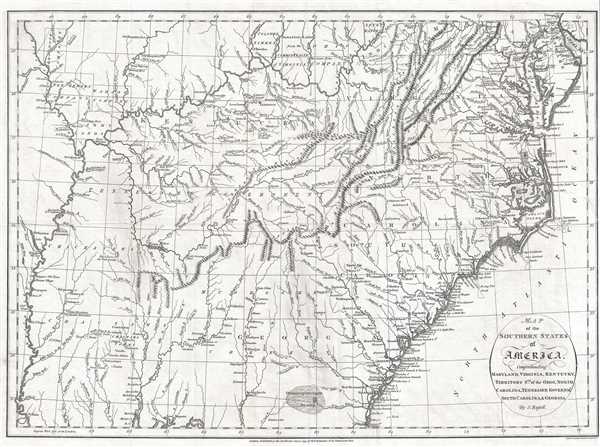 This is a 1795 John Russell map of the southeastern United States. The map depicts the region from the Mississippi River to the Atlantic Ocean and from Wilmington, Delaware to Mobile and Mobile Bay, Alabama and Pensacola, Florida.

Expansion of the United States

In capturing the United States' continued push westward, Russell's work identifies important aspects of this movement. Several land companies are identified here, including the Ohio Company, the Illinois Company, and the Wabash Company. These companies were created to help settle land west of the Appalachian Mountains. Some, like the Ohio Company, were legitimate enterprises supported by either a state or the federal government, or both, whose claims were recognized. Others, such as the Illinois-Wabash Company (labeled separately here as both the Illinois Company and the Wabash Company), never achieved legitimacy and their land purchases from the Native Americans were not recognized by a state government (Virginia) or the federal government. The Seven Ranges are also labeled. This tract of land played an important role in the settlement of the American West because it was the first tract surveyed in what became the Public Land Survey System, a system that was used to survey all the land to the west of the Seven Ranges. The Tennessee Government is also labeled, which preceded Tennessee's statehood, which would come later in 1795.

An incredibly detailed piece, numerous cities and towns are labeled throughout the region, including Wilmington, Washington, D.C., Annapolis, Richmond, New Berne, Norfolk, Charleston, and Savannah. Other labeled locations include Native American villages throughout the western portion of the map, with tribes such as the Chickasaw and Choctaw being identified on the map. Forts are illustrated and labeled throughout, along with myriad rivers, lakes, and other physical features. Both Albemarle and Pamlico Sound in North Carolina are labeled, along with Delaware Bay and Chesapeake Bay, which is illustrated in detail. The Appalachian Mountains, Allegany Mountains, and Blue Mountains are also illustrated.

This map was drawn by John Russell and published by Henry Delahoy Symonds in 1795.