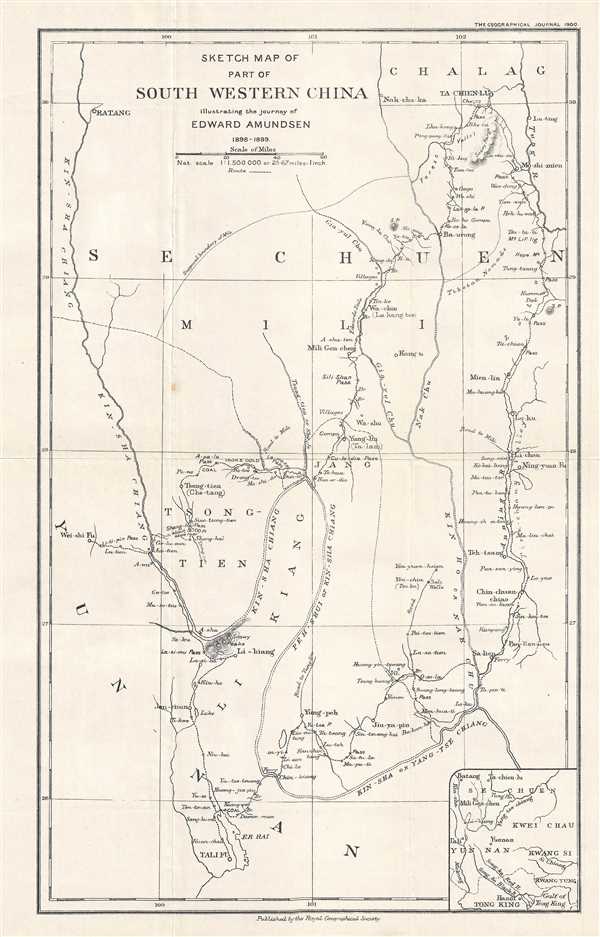 Illustrates some of Amundsen's travels in Sichuan and Yunnan Provinces as a Christian missionary.

This is a 1900 Edward Amundsen map of the Sichuan and Yunnan Provinces in China. The map depicts the region from Batang and Ta-Chien-Lu to Dali City (Tali Fu). Illustrating Amundsen's excursion through this territory, a dashed line traces his journey from Wei-shi Fu to Tali Fu (Dali City). Numerous locations along his route are labeled, such as mountain passes, villages, and towns. Rivers, including the Yangtze, snake their way across the map. Amundsen notes forests, iron and gold deposits, and the territory of Tibetan nomads. An inset map situated in the lower right corner gives the viewer a larger regional context, placing Batang and Tali in relation to Yunnan, Hanoi, and the Gulf of Tonkin.

This map was drawn by Edward Amundsen and published in the Geographical Journal by the Royal Geographical Society in 1900.

Edvard Amundsen (January 27, 1873 - December 21, 1928) was a Norwegian explorer and Lutheran missionary in China and Tibet. He is also known as a Tibetan specialist. Amundsen traveled with Theo Sørensen to Darjeeling and Kalimpong in 1896 as a missionary for the Chinal Inland Mission, where he studied Tibetan religion and customs. After completing his language studies, he parted ways with Sørensen and traveled on to Lhasa. At some later point, Amundsen and Sørensen traveled together to Dartsedo in the foothills of the Tibetan plateau. In 1900, during the Boxer Rebellion, Amundsen was forced to leave China for Darjeeling, but he returned in 1903 and worked in Yunnan or the British and Foreign Bible Society until 1911. He served in China for the last time from 1918/1919 until 1924 for the Mission Covenant Church of Norway. Learn More...