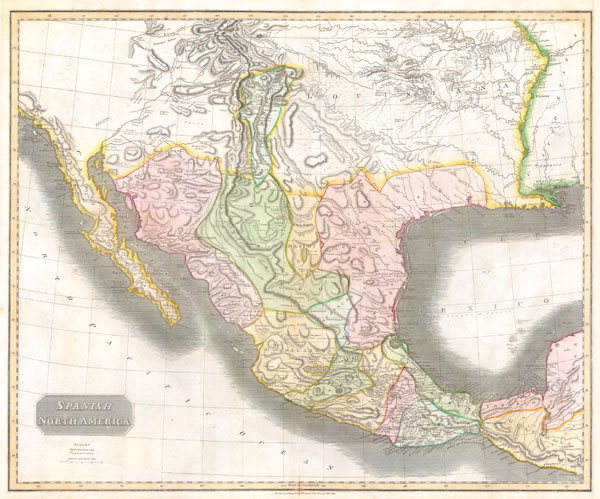 This hand colored map, along with Pinkerton's similar map, is most likely the most important large format English map of the American Southwest to be produced in the 19th century. Depicts Mexico from the Yucatan north to what would become the Republic of Texas, the Louisiana Territory, and what would eventually be the U.S. States of New Mexico, Arizona, Texas, California, Nevada, Utah, Louisiana, Oklahoma and Colorado. This map is based largely on the explorations of Humboldt, Long and Pike. The name Texas appears on this map only as the name of a settlement on the Colorado River. There are curiously two Great Salt lakes and an unknown river connecting them. The Louisiana region is especially well notated with numerous annotations regarding the Indian tribes inhabiting the region. Dated: 'Drawn and Engraved for Thomsons New General Atlas 1814.' This map is an essential addition to any serious Texas, Trans-Mississippi, or Southwest collection

Fine or Perfect condition. Wide clean margins. Original platemark visible. Bank on verso.
Looking for a high-resolution scan of this?