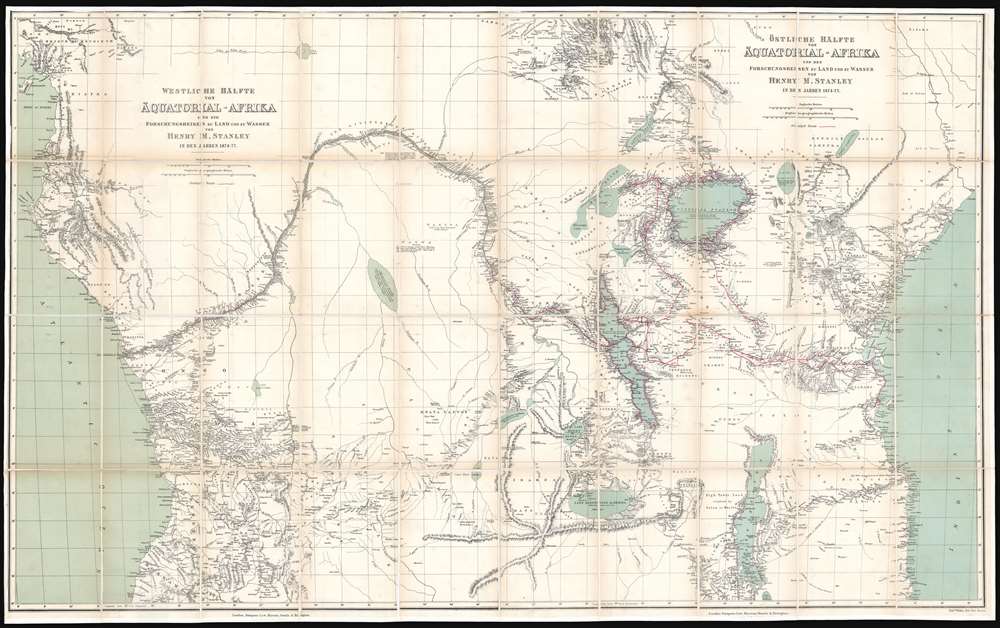 The first complete and relatively accurate mapping of the Congo River.

A map of considerable historical significance, this is the 1878 German edition Edward Weller and Henry Morton Stanley's map of Equatorial Africa, the first to describe the course of the entire Congo River. The map depicts the region from the Atlantic Ocean to the Indian Ocean and from the mouth of the Bight of Biafra to the southern tip of Lake Malawi (Lake Nyassa). The bright red line present on the map traces Stanley's expedition from Zanzibar to the Atlantic Ocean, with myriad locations identified along its path and some commentaries on different locations included.

The Importance of Stanley's Map

This map, originally created to accompany Stanley's book about the expedition entitled Through the Dark Continent, is the first relatively accurate mapping of the Congo. It is not perfect, which can be discerned when compared with a modern map of the river. But, when one considers the incredible difficulty of the terrain and the fact that Stanley was not a trained cartographer, the impressive nature of this feat begins to emerge. Stanley filled six notebooks with cartographic notes during the expedition. He details the river's course, while including notes about the banks, river islands, and tributaries. Crucially, Stanley also identifies the settlements along the river, providing the one of the only sources for local names before the advent of the colonial powers, which more often than not wiped out this indigenous heritage. Commentary on the local tribes is present as well, adding what they were like and how they were armed. When one compares this printed version of Stanley's map with the sketches present in his notebooks, it becomes apparent that the printed map retains most, if not all of Stanley's comments as he carried out his task, allowing the viewer a look into the experience.

This map traces all of Henry Morton Stanley's Anglo-Amerigan Expedition, which took place from 1874 to 1877. The expedition's stated goals were to explore Lake Victoria, Lake Albert, and Lake Tanganyika, and their inflowing and outflowing rivers, and to explore the Lualaba River downstream from its outflow. Another important goal of the expedition was to establish the source of the Nile River. Sponsored by the New York Herald and the Daily Telegraph, Stanley left Zanzibar on November 12, 1874 at the head of a column of 230 people, most of whom were African porters. By March 1875 he and his party arrived at Lake Victoria, though over sixty members of his party had died en route. Stanley spent fifty-seven days exploring Lake Victoria, and then moved on to Lake Tanganyika, but was unable to explore Lake Albert due to a war between Uganda and Wavuma. The party then began work on achieving their final goal of determining whether the Lualaba River fed the Nile, the Congo, or even the Niger. This arduous task took nearly a year after departing Lake Tanganyika, and in the end Stanley's party numbered only 115, including three children that had been born during the trip. Once Stanley and his party emerged from the jungle they had successfully proven that the Lualaba River did not feed into the Nile or the Niger River, but that it was in fact the source of the mighty Congo.

This map is an example of the German edition of Stanley's map, which was created by Edward Weller, and published in Leipzig by F.A. Brockhaus in conjunction with Stanley's publisher in London Sampson, Low, Marston Searle and Rivington. The German edition is exactly the same as the English edition with the exception of the translated title. The map was originally produced for publication with Henry Morton Stanley's book entitled Through the Dark Continent; Or, The Sources of the Nile: Around the Great Lakes of Equatorial Africa and Down the Livingstone River to the Atlantic Ocean. Originally published as two separate sheets, here they have been joined, dissected, and mounted on linen. The OCLC records only four examples of both sheets appearing together, which are part of the institutional collections at the University of Bern; the St. Gallen Library in St Gallen, Switzerland; the Central Library in Zurich, Switzerland; and the Museumgesellschaft in Zurich, Switzerland.


Sir Henry Morton Stanley (January 28, 1841 - May 10, 1904) was a British journalist and explorer and a seminal figure in the history of exploration for which we can offer only a cursory treatment here. Stanley is renowned for his explorations of central Africa, locating the missionary and explorer David Livingstone, and his search for the source of the Nile. Born in Wales, Stanley was the illegitimate son of an 18 year old woman and an unknown man, saddling him with the burden of illegitimacy throughout his life. Rowlands moved to the United States in 1859, where he adopted the name Henry Morton Stanley under unclear circumstances. Stanley fought on both sides of the American Civil War and also served in the Union Navy, possibly the only man to serve in all three. After the war, Stanley became a foreign correspondent for the New York Herald, for which he traveled the world, writing stories about his explorations for the paper. Learn More...