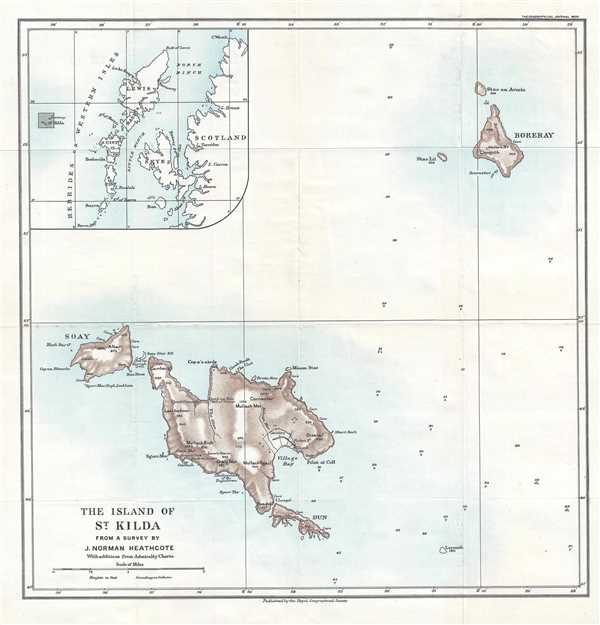 Possibly the first printed specific map of the St Kilda archipelago in Scotland.

This is a 1900 John Norman Heathcote map of the St Kilda archipelago, the outermost islands of the Outer Hebrides of Scotland. The map depicts all four islands, which are Hirta (the largest), Dùn, Soay, and Boreray, along with an inset map in the upper left corner illustrating where the archipelago is situated in relation to mainland Scotland. Possibly the first printed specific map of this archipelago, St Kilda is now uninhabited. At the time of this map's creation, however, seventy people lived on Hirta. The archipelago was a popular tourist destination in the late 19th and early 20th century, with people visiting during the summer by steamer and private yachts. The entire population of Hirta (then numbering 36 people) was evacuated to mainland Scotland on August 29, 1930.

This map was published in the Geographical Journal by Heathcote with an article explaining the methods he used to survey the islands to create the map he included in his book, titled St. Kilda. The book evolved out of two visits Heathcote and his sister took to the island in 1898 and 1899 and details the people of St Kilda, their history and customs, along with the wildlife and his and his sister's experiences while visiting the islands.

This map was published in the Volume 15, No. 2 of the Geographical Journal in February, 1900.

John Norman Heathcote (June 21, 1863 - July 16, 1946) was a British author, watercolorist, and photographer, known for writing the book St Kilda about the Scottish Hebridean archipelago of St. Kilda, which was published in 1900. The second child of and eldest son of John Moyer Heathcoate (1834 - 1912) and Louisa Cecilia MacLeod (1838 - 1910), his father was a barrister and his mother was the eldest child of Norman MacLeod, 25th chief of Clan MacLeod. Heathcote attended Eton College and then Trinity College, from which he earned a BA degree in 1885. In 1906 he became a Justice of the Peace and served as High Sheriff of Huntingdonshire in 1917/18. He never married or had children. St Kilda, his best known work, was published in London in 1900, after he and his sister visited the archipelago in 1898 and 1899. He also published a journal article, ‘A Map of St Kilda’ in the Geographical Journal describing the surveying methods he used in producing the map that was included in the book. Learn More...