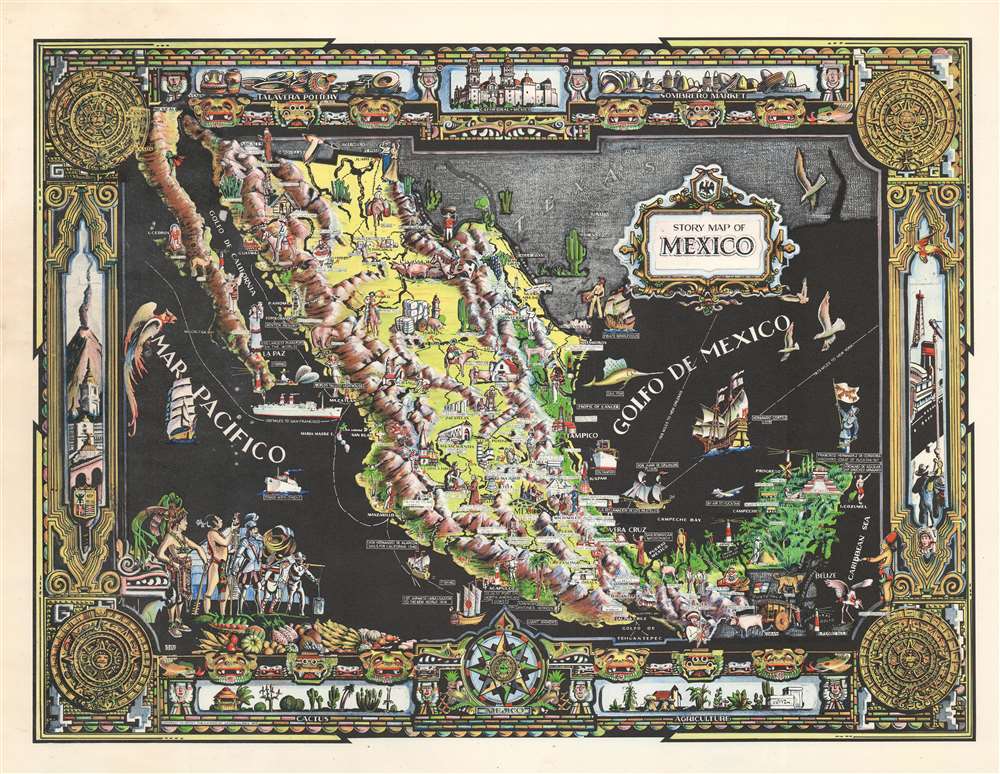 This is a 1939 Colortext pictorial story map of Mexico. Colortext uses pictorial icons to promote Mexican industry and culture, highlight events in Mexican history, and mark important sites across the country. Images of ranches, fishermen, miners, and basket weavers are illustrated alongside dancers and tourists. Historical figures, including Cortez, Montezuma II, Francisco Hernandez de Cordoba, appear next to both historical and modern sites, such as Chichen Itza, the baths at Aguascalientes, and the lighthouse at Mazatlán. The pictorial border is heavily influenced by Aztec aesthetics, situating the Aztec calendar in the corners and masks along the top and bottom.

This map was created by Colortext Publications and published in 1939. An example is part of the David Rumsey Map Collection. The 1939 edition does not appear in OCLC and only one example of the second edition, published in 1944, is cataloged in the database.

Colortext Publications (c. 1933 – 1950) was a Chicago based firm active in the middle part of the 20th century. The firm's earliest work is a series of pamphlets associated with the Chicago Century of Progress International Exposition (1933-1934). Following the exposition Colortext partnered with various artist to create a series of pictorial maps known as 'Story Maps.' The firm partnered with such notable pictorial map artists as Ernest Dudley Chase, Egbert G. Jacobson, Julio de Diego, A. Walker and W.E. Vogelear. Although it is unclear who founded the firm, it is registered business at 8 South Michigan Avenue, Chicago, as early as 1933. In 1938 and 1940, the firm produced to exceptional publications, a panoramic view of Chicago and the Military Panoramap of the Theatre of War. These depart markedly form the 'Story Map' model and reveal a greater level of sophistication than evident in Colortext's earlier publications. Sometime after World War II Colortext was acquired by the Chicago businessman and druggist Paul J. Mandalbach. The firm's last publication was in 1950, a Story Map of the West Indies. Learn More...