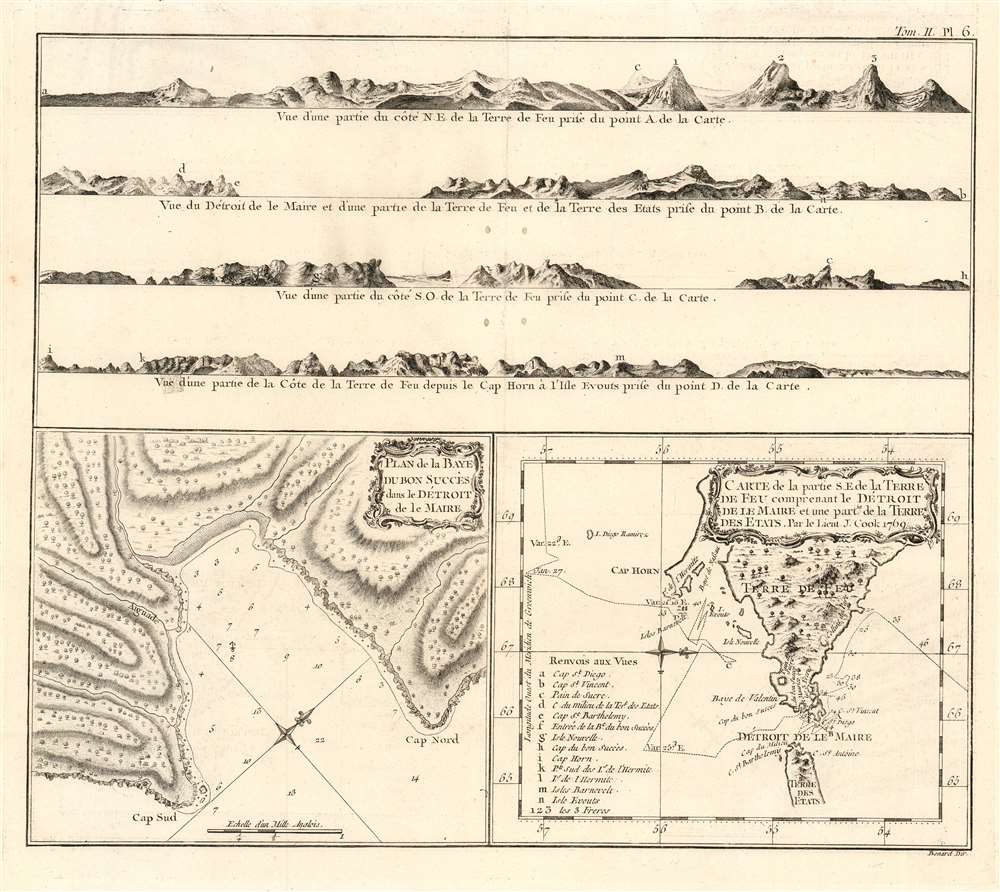 This 1774 Hawkesworth map of the Strait of Le Maire details the passage through the strait made by Lieutenant Cook (1728-1779) during his 1769 circumnavigation aboard HMS Endeavor. This, Cook's first Pacific voyage, was undertaken in order to observe the 1769 transit of Venus from Tahiti. The relevant portion of the voyage diverged sharply from its precursors, in that Cook took Endeavor through the Strait of Le Maire, rather than that of Magellan, thereafter sailing south to find evidence of the legendary Terra Australis Incognita.

The map actually consists of two charts, and an accompanying set of coastal profiles. The lower left corner of the engraving is a north-west oriented chart of the Bahia Buen Suceso, on the western shore of the Strait of Le Maire. The rocky coastline, sparsely-forested hills, and the beach at the western extreme of the bay are quite recognizably depicted here. Cook’s anchorage is shown, along with a thorough set of depth soundings. The west-oriented chart in the lower right hand corner shows Cook’s passage through the Strait, including depth soundings and magnetic variations. Topographical features and vegetation are shown pictorially. A key provides numerical and alphabetical references to locations shown in the coastal views, so that the reader can see a navigator’s-eye-view of the features named on the chart. Such coastal profiles, on a working nautical chart, provided the navigator incontrovertible proof that he was (or was not) correct in his navigational calculations: such a view, paired with a chart, provided a picture of what he ought to be seeing were he at the location indicated on the chart. In this case, the chart was not intended for navigation, but the views provided armchair-traveler audience the only glimpse of these remote and forbidding coastlines they were ever likely to get.

This chart was engraved for inclusion in John Hawkesworth's Relation des voyages entrepris par ordre de Sa Majeste britannique actuellement regnante, in its French edition of 1774. The separate engraving appears to be neglected by institutional collections, appearing catalogued only at Princeton according to OCLC. The full text is well represented in institutional collections.