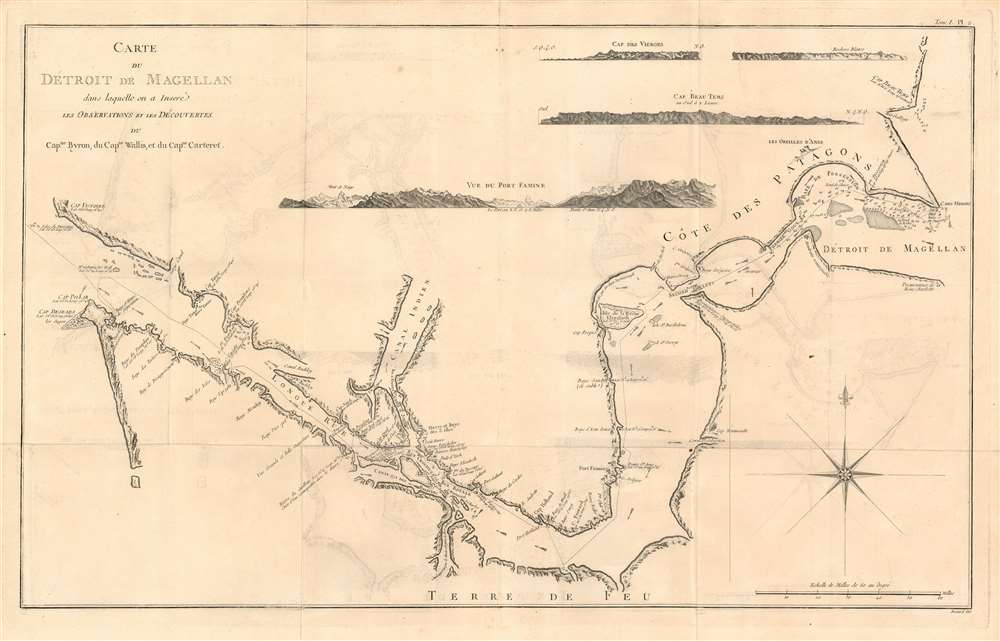 A Grand, Detailed Chart of Cook's Passage Through the Straits
$950.00

This 1774 map of the Straits of Magellan reveals the discoveries made by Captains Samuel Wallis (1728-1795) John Byron (1723-1786) and Captain James Cook (1728-1779) during their respective voyages. In compiling the data of these three explorers, Hawkesworth's chart presented the best knowledge of this important and storied passage. This large and boldly engraved piece shows in detail the treacherous coasts of southern Patagonia and of Tierra del Fuego, replete with soundings, channels, anchorages and small islands. Recognition views are provided for Cabo Virgenes, White Cliffs, Cape Fair Weather at the mouth of the Rio Gallego, and A view of Puerto del Hambre. The coastline is full of detail and colorful place names, such as 'Cape Victory' and 'Piss Pot Bay.'

This chart was engraved for inclusion in John Hawkesworth's Relation des voyages entrepris par ordre de Sa Majeste britannique actuellement regnante, in its French edition of 1774. The separate engraving appears to be neglected by institutional collections, appearing only in the University of Chicago and the National Library of Australia. The full text is well represented in institutional collections.

Good condition. Reinforced at one juncture of folds; some offsetting and wormhole at upper centerfold not affecting print.