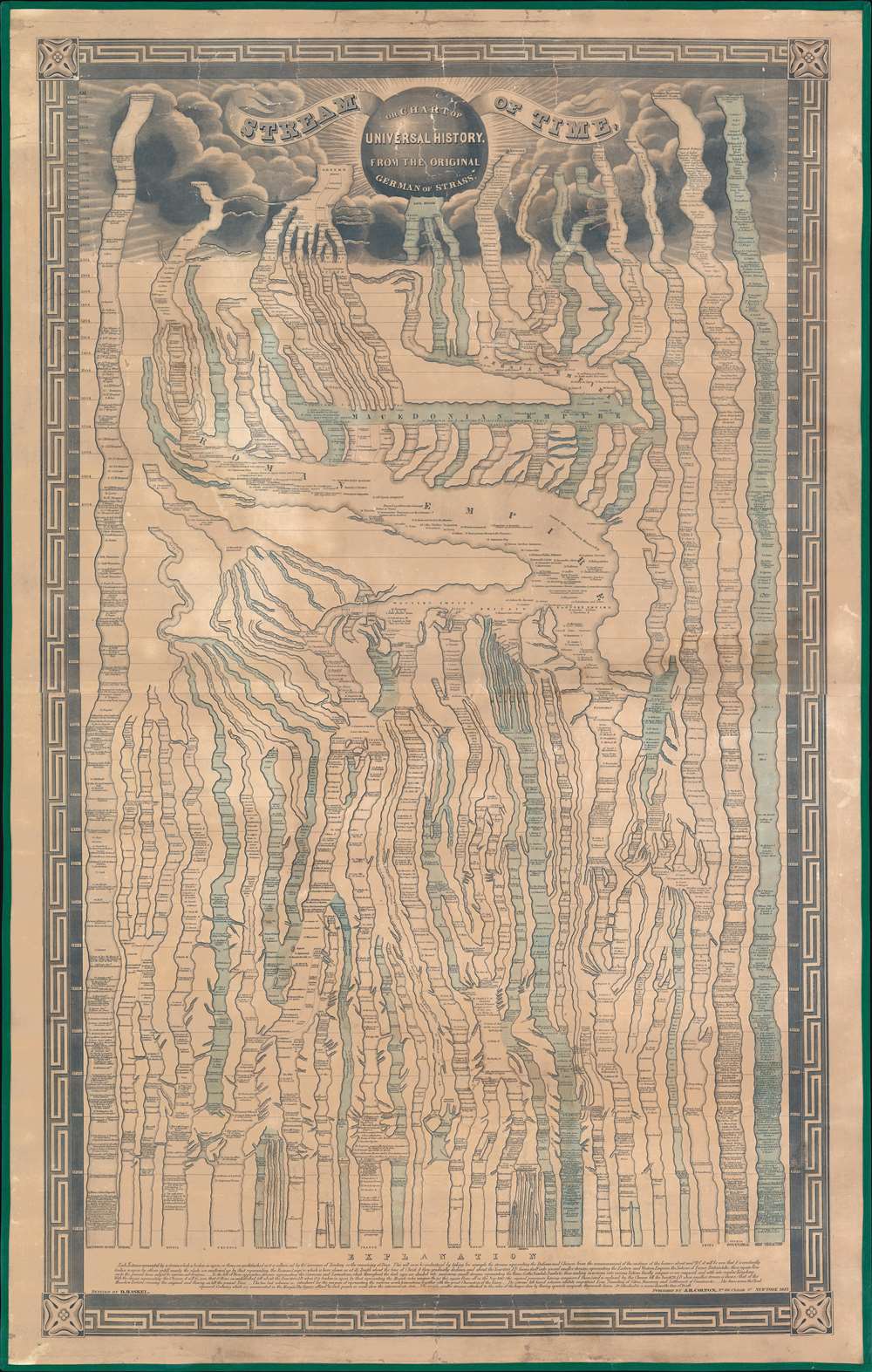 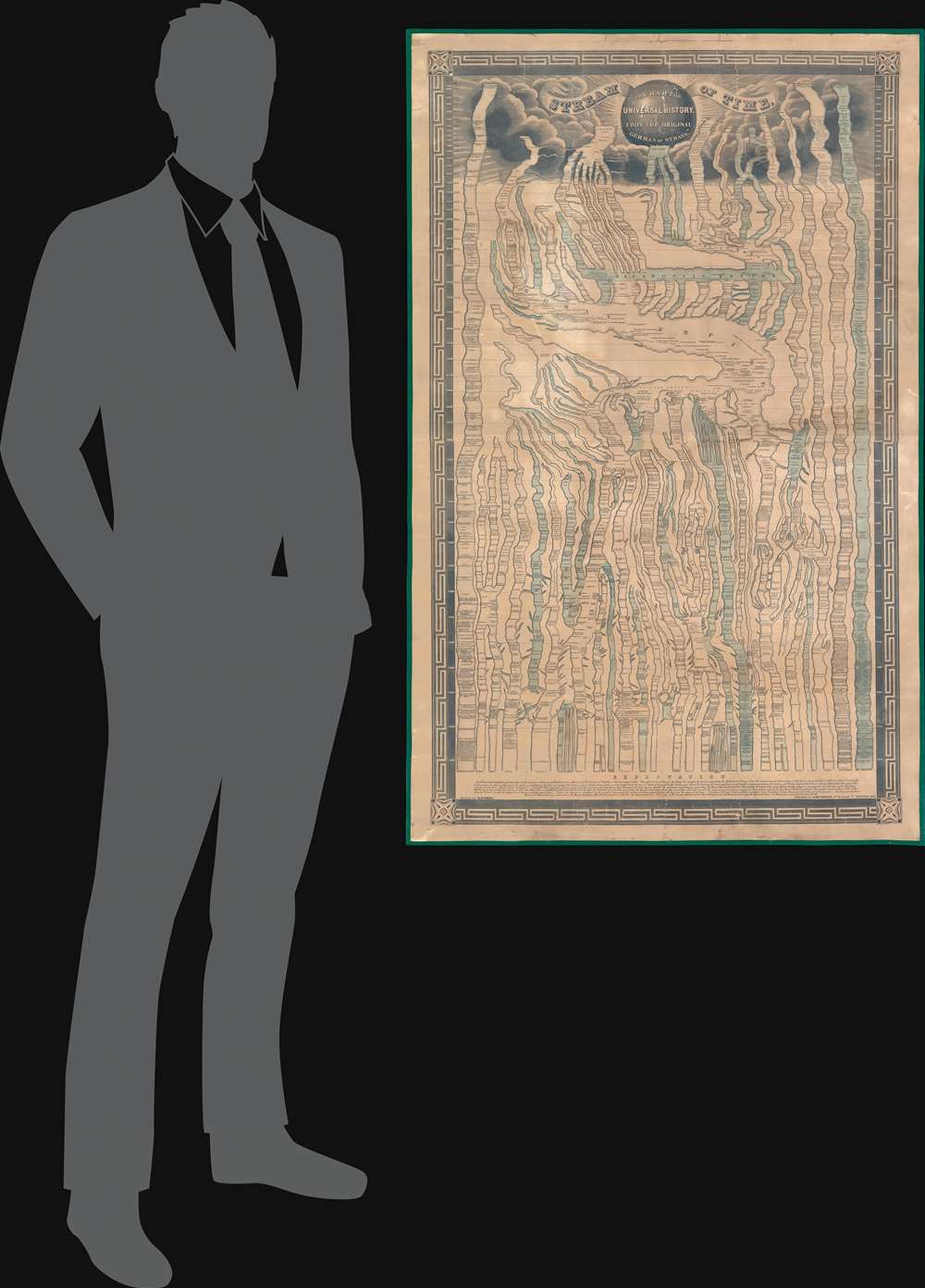 A remarkable 1845 chart of world history covering the passage of time from creation (4004 BC) to roughly 1845. This chart applies the metaphor of a stream to the passage of time. Time is here divided into great channels, representing the great civilizations of antiquity: Greece, Rome, Assyria, China, Egypt, Jews, etc. Additional broader channels record 'Inventions, Discoveries, Remarkable Events', 'Great Characters' (Essentially the 'begats'), and the 'Eras Founding of Cities Discovery and Settlement of Countries.' Despite its ties to outdated Biblical thinking, the chart has much to offer, placing often seemingly disconnected historical events into a global context. Note for example the outsized influence of the great historical empires in consolidating and refining disparate timelines - the Roman Empire, for example takes the form of a great sea into which most timelines of antiquity flow. As the chart moves into the modern era, it get exponentially more complex, with new timelines (the Germans, Samaritans, Norwegians, and Hungarians for example) entering the fray.

Explained by the Creator

Each Nation is represented by a stream which is broken in upon or flows undisturbed as it is influenced by the accession of Territory or the reaming at peace. This will soon be understood by taking for example, the streams representing the Italians and Chinese, from the commencement of the existence of the former about 1900 BC, it will be seen that it is constantly broken in upon by others until nearly the whole are swallowed up by that representing the Roman Empire; which is here shewn at its Zenith around the time of Christ, it then gradually declines, and about the year 400 AD forms itself into several smaller streams, representing the Eastern and Western Empires, the Nations of France, Britain and c. these again flow on to the present time, subject to various subdivisions…

The chart follows on an influential chart first issued in 1804 by Friedrich Strass as Strom der Zeiten. Strauss was influenced by Joseph Priestly, an English natural philosopher, who advocated for a graphic rather than annalistic representation of history. Anthony Grafton and Daniel Rosenberg, in their Cartographies of Time: A History of the Timeline, describe how time on such charts 'ebbs and flows, forks and twists, runs and rolls and thunders.' The original work proved extremely popular, and was immediately translated into multiple languages. The theme was also applied to other timelines, such as Emma Willard's 1826 Picture of Nations.

Daniel Haskel (June 1784 - August 9, 1848) was an American scholar, reverent, and university administrator active in New England in the first half of the 19th century. Haskell was born in Preston, Connecticut. He studied in Yale, graduating in 1802. He went on to study theology at Princeton before, in 1810, accepting the pastorate of the First Calvinistic Congregational Society in Burlington, Vermont. In 1821, he became the third president of the University of Vermont, a position he held until 1824. Learn More...