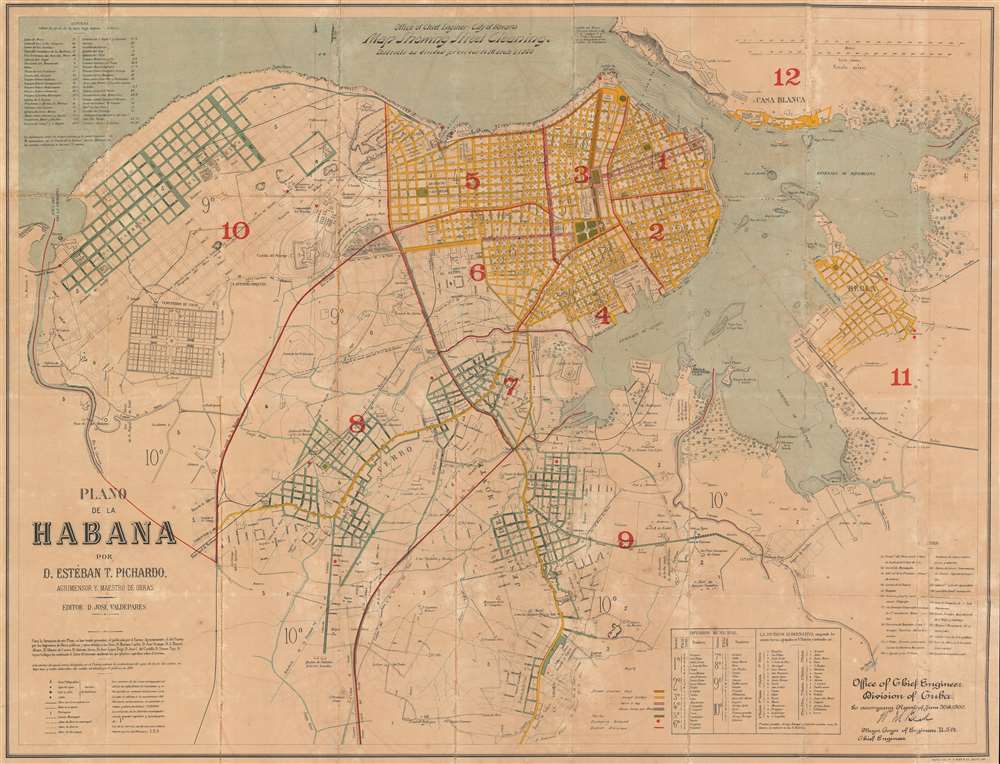 Records the American occupation of Cuba following the Spanish-American War.
$500.00

Created during the U.S. occupation of Havana following the Spanish-American War, this is William Murray Black's 1900 city plan or map of Havana, Cuba. The map is part of a series highlighting efforts by the Americans to increase sanitation in the city, with the present example detailing street cleaning. With content in both English and Spanish, the map depicts the city from the Rio la Chorrera to Regla and Morro Castle (Castillo del Morro) at the entrance to Havana Bay, to Vibora.

Looking at the Map

Featuring content in both English and Spanish, Black and his men in the Army Corps of Engineers in Cuba repurposed a Cuban map by Estéban Pichardo y Tapia for use in their reports. Black included a series of maps in his reports, each presenting information about a different aspect of his work. In this particular case, street cleaning is the map's focus, with different colors used to note how often certain streets are cleaned. Streets shaded orange are cleaned daily, while those colored yellow are cleaned every day except Sundays. Pink streets are cleaned twice per week, while blue streets are cleaned three times per week. The solid red lines mark boundaries between city districts. Information concerning which neighborhoods were situated in each of the original city districts is included in a table situated along the map's bottom border. Roads throughout the city are labeled, as are neighborhoods and suburbs. Numerous buildings are identified, including the Arsenal, Morro Castle, and the Castillo de Atarés.

William Murray Black (December 8, 1855 - September 24, 1933) was an American career officer in the United States Army who served in the Army Corps of Engineers. Born in Lancaster, Pennsylvania to James and Eliza Black, Black attended Lancaster High School and graduated at 14 years old. After graduation he enrolled at Franklin and Marshall College and applied for an appointment to the United States Military Academy at West Point. Black left Franklin and Marshall in March 1873 after receiving his appointment to West Point, which he entered in June of that year. He graduated in 1877 at the top of his class and was commissioned as a second lieutenant in the Army Corps of Engineers. Just after graduation Black stayed at West Point and served as an assistant instructor of Practical Military Engineering. Soon, however, he was on the move and was attending the Engineering School of Application at Willits Point, Long Island, from which he graduated as a first lieutenant. From here, from March 1880 until August 1882, Black was assigned to the River and Harbor Works on the Kanawha and Ohio Rivers and helped build locks and dams. He was then transferred back to West Point where he served from August 1882 until January 1886 as an Assistant Instructor of Practical Military Engineering. Following this second stint at West Point, Black was appointed the District Engineer of the Florida District. During his time in Florida, Black helped Jacksonville develop into a thriving seaport. It is during his time in Florida that he is credited with beginning the use of reinforced concrete in the construction of fortifications. Then he served as an instructor of Civil Engineering at the Army Engineering School at Willits Point, New York from 1891 - 1895 while also commanding Company C of the Battalion of Engineers. During his time at Willits Point, his expertise and influence grew, and by 1895 he was placed in charge of the Division of Personnel and Fortifications and by 1897 was appointed the Engineering Commissioner of the District of Columbia. By the outbreak of the Spanish-American War in 1898, Black had risen to the rank of captain. After the outbreak of the war, Black was promoted to Lieutenant Colonel of Volunteers and placed in command of a corps of infantry volunteers. Black trained these men how to be army engineers and then led them in the first seaboard invasion of Puerto Rico at Guanica in July 1898. Soon Black was named Chief Engineer of Puerto Rico and would hold this position for the remainder of the war. While in Puerto Rico he contracted typhoid fever and nearly died. In January 1899, black was transferred to Cuba where he was named Chief Engineer of the Department of Havana. As Chief Engineer, Black organized the Department of Public Works and established sanitary conditions in Havana. Upon the arrival of a new commanding general, Black was again promoted to the position of Chief Engineer of the Island of Cuba. He was responsible for writing the code of regulations for the conduct of Public Works in Cuba, which remained in force until it was written into the laws of the nascent Cuban Republic. During h9is tenure he established public mapping, constructed sewers, paved streets, constructed wharves, and protection for the ocean-front that established Havana as a viable seaport. Over the next few years Black oversaw several projects in the United States and was an observer of canal work in Panama undertaken by a French company before returning to Cuba as an advisor to the Department of Public Works of the Provisional Government. He held this position from 1906 through 1909 and helped see several projects to fruition, including the beautification of Havana and the construction of arterial highways throughout the island. In 1909 he returned to the United States and received numerous positions in New York City, including as a Senior Member of the Board to raise the Maine, the battleship that had sunk in Havana Harbor and been the cause for the Spanish-American War. The Cuban government wanted the Maine removed from Havana Harbor because it was a navigational hazard, and so Black and two other engineers successfully planned the raising of the vessel (the first time a sunken ship had ever been raised) and its towing out to international waters so that it could be sunk again. In 1916, then Major General Black was promoted to Chief of Engineers of the Army. Even though World War I was waging in Europe, Black's immediate concern upon that ascending to this position was the Mexican border. Even so, Black had the foresight to know that the army would soon be in need of more engineers, he established the Engineer Officers' Reserve Corps and, by his retirement form the army on October 31, 1919 had grown the Corps of Engineers from 254 officers and 2162 enlisted men to 10,761 officers and 297,557 enlisted men. After retiring, Black remained active with an engineering consulting firm in Washington, D.C. called Black, McKenny, and Stewart, and finally retired in 1929. Black died at his home in Washington, D.C. on September 24, 1933. Black married Daisy Peyton Derby in 1877 with whom he had one son. Daisy passed away in March 1889. Black remarried in 1891 to Gertrude Totten Gamble, with whom he had two sons.


Esteban Pichardo y Tapia (December 26, 1799 - August 26, 1879), known as the 'Father of Cuban geographers', was the most important Cuban geographer. Born at Santiago de los Caballeros on Santo Domingo, Pichardo and his family moved to Cuba when he was two years old. He studied in Havana and earned a Bachelor's degree from the Seminary of San Carlos and San Ambrosio. He graduated with a law degree from Havana University in 1822. His main geographical accomplishment is the Itinerario General de Isla de Cuba.

Good. Backed on archival tissue for stability. Wear and loss along original fold lines. Areas of infill. Blank on verso.