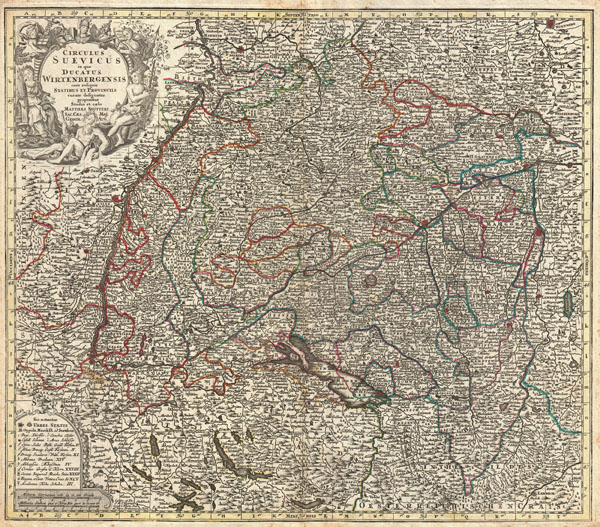 This is a rare c. 1740 map of Swabia and Wittenberg, Germany. Covers from Strasburg eastward as far as Landsperg, north as far as Nuremberg and south to Lucern. Includes Nuremberg, Heidelberg, Strasburg, Manheim, Lucerne (Lucern, Luzern), Boden See, and Stuttgart. Detail includes cities, forts, some topographical features, and districts. Decorative title cartouche in the upper left quadrant featuring the instruments of science and symbols of bounty. Prepared by Matthaeus Seutter and issued in Augsburg as plate no. 11 in Homann Heirs' Maior Atlas Scholasticus.


Johann Baptist Homann (March 20, 1664 - July 1, 1724) was the most prominent and prolific map publisher of the 18th century. Homann was born in Oberkammlach, a small town near Kammlach, Bavaria, Germany. As a young man Homann studied in a Jesuit school and nursed ambitions of becoming a Dominican priest before converting to Protestantism in 1687. Following his conversion, Homann moved to Nuremberg and found employment as a notary. Around 1693 Homan briefly relocated to Vienna, where he lived and studied printing and copper plate engraving until 1695. Afterwards he returned to Nuremberg where, in 1702, he founded the commercial publishing firm that would bear his name. In the next five years Homann produced hundreds of maps and developed a distinctive style characterized by heavy detailed engraving, elaborate allegorical cartouche work, and vivid hand color. The Homann firm, due to the lower cost of printing in Germany, was able to undercut the dominant French and Dutch publishing houses while matching the diversity and quality of their output. By 1715 Homann's rising star caught the attention of the Holy Roman Emperor Charles the VI, who appointed him Imperial Cartographer. In the same year he was also appointed a member of the Royal Academy of Sciences in Berlin. Homann's prestigious title came with a number of important advantages including access to the most up to date cartographic information as well as the "Privilege". The Privilege was a type of early copyright offered to a few individuals by the Holy Roman Emperor. Though not as sophisticated as modern copyright legislation, the Privilege did offer a kind of limited protection for several years. Most all J. B. Homann maps printed between 1715 and 1730 bear the inscription "Cum Priviligio" or some variation. Following Homann's death in 1724, the management of the firm passed to his son Johann Christoph Homann (1703 - 1730). J. C. Homann, perhaps realizing that he would not long survive his father, stipulated in his will that the company would be inherited by his two head managers, Johann Georg Ebersberger and Johann Michael Franz, and that it would publish only under the name Homann Heirs. This designation, in various forms (Homannsche Heirs, Heritiers de Homann, Lat Homannianos Herod, Homannschen Erben, etc..) appears on maps from about 1731 onwards. The firm continued to publish maps in ever diminishing quantities until the death of its last owner, Christoph Franz Fembo in 1848.

Stanford University, Map Collection, Germany 2082.
Looking for a high-resolution scan of this?