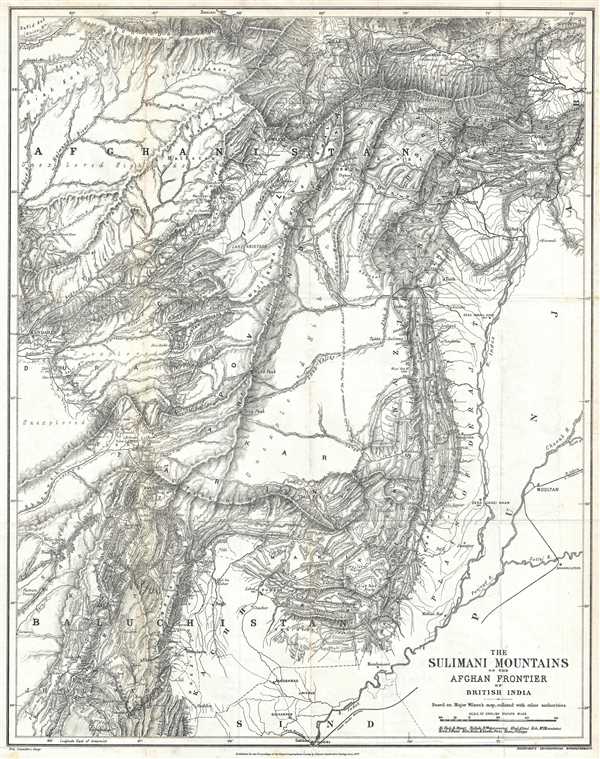 One of the earliest accurate mappings of the Afghanistan's Sulimani Mountains.

This is a rare 1879 Sir Clements Robert's map of the Sulimani Mountains in Afghanistan. This map depicts the Afghanistan-Pakistan border, which at the time was British India, from Peshawar (Peshawur) and Kabul in the north to south to Rohri and from Kandahar in the east to Punjab in the west. The topography of the map is incredibly detailed, showing myriad mountain ranges. All of which are labeled. The map is meant to accompany C.R. https://'s paper 'The Mountain Passes on the Afghan Frontier of British India' which appeared in the Proceedings of the Royal Geographical Society in January 1879. In his paper, Mr. https:// discusses the watershed created by the Sulimani Mountains, as well as their historical importance as the 'gateway' to India. Since the map is meant to help illustrate the watershed created by the Sulimani Mountains, innumerable rivers are labeled on the map, including the Indus, Helmand, and Kabul. The map also depicts a section of the Indus Valley Railway from Rohri to Mooltan.

This map was published by Stanford's Geographical Establishment for the Proceedings of the Royal Geographical Society in 1879.