1659 Jansson Map of Sumatra, Malaya, and the Straits of Malacca (Singapore) 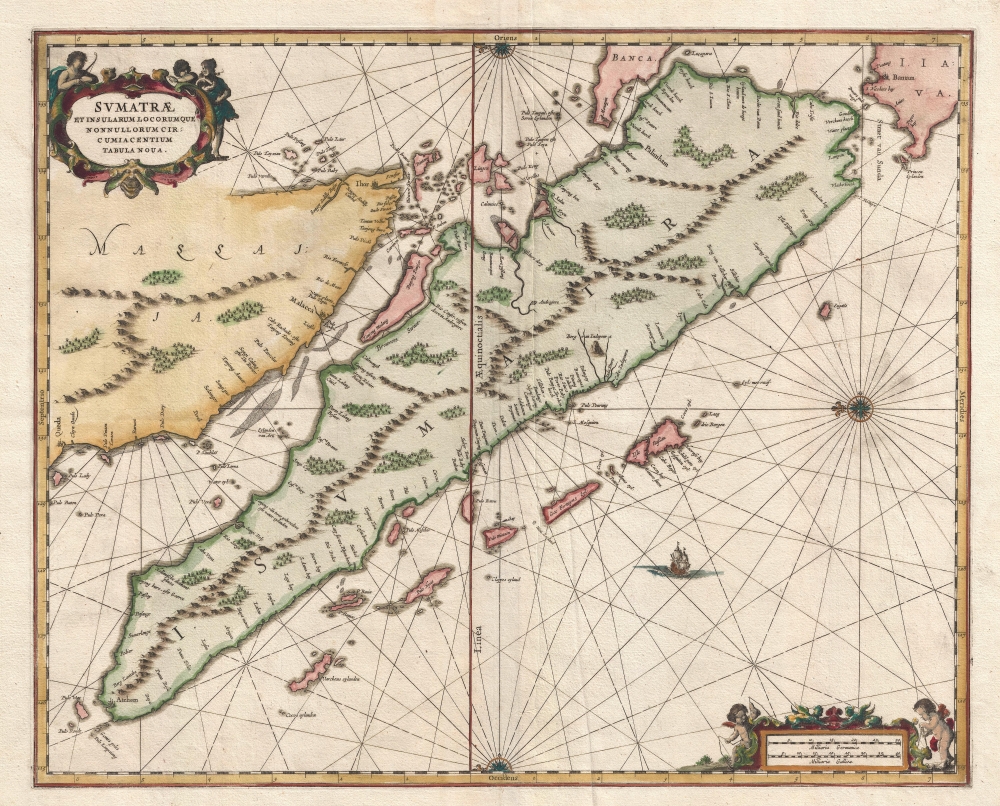 1659 Jansson Map of Sumatra, Malaya, and the Straits of Malacca (Singapore)

A stunning 1657 map of Malay, Sumatra, and the Straits of Malacca, including Singapore, prepared by Jan Jansson for the Waterwereld, the first printed Dutch sea atlas. Oriented to the East, the map is centered on the island of Sumatra, which it convers in its entirety. Also included are the Straits of Malacca, the southern parts of the Malay Peninsula, and the Strait of Sunda. The map names Senafur, a promontory just south of Ihor (Johor Baharu), which most scholars associate with modern day Singapore. The Strait of Malacca is clearly mapped with shallow areas noted. A number of important locals on the west coast of Malay, including Malacca and Johor (Ihor) are noted. On Sumatra numerous points along the southwest coast are mapped but h only city identified is Aceh (Atchem).

In 1644, the Dutch East India Company (VOC) seized control of Malacca, then the largest western port on the Malay Peninsula, from the Portuguese. In addition to the general goal dominating the East India trade, they VOC also planned to seize control of Malayan tin reserves. At the time, the central Malayan tin producing region was a vassal state of the powerful northern Sumatran Sultanate of Aceh. To counter Aceh, the VOC formed an alliance with Johore, a city-state near modern day Singapore. Not only did the alliance successfully wrest the Malayan tin region from Aceh, it also destabilized the Aceh sultanate in general, leading to a loss of political cohesion in Sumatra.

This map did not appear in the 1650 first issue of Waterwereld. At the time, little was known of this part of the world, and what was known, was jealously guarded by Portuguese merchantmen and the ascendant Dutch East India Company (VOC). By 1657, when Jansson produced the second issue of Waterwereld, the VOC had stabilized their hold on the Straits of Malacca and started to leak geographical information. The of new geographical information about the East Indies prompted Jansson to add three new maps to the second edition of his sea atlas, the Sumatra and the Malacca Strait (as here), Java, and Borneo. Original Jansson issues of the map from 1867, as here, are rare, but it was reissued by Pieter Schenk and Gerard Valk in 1710.