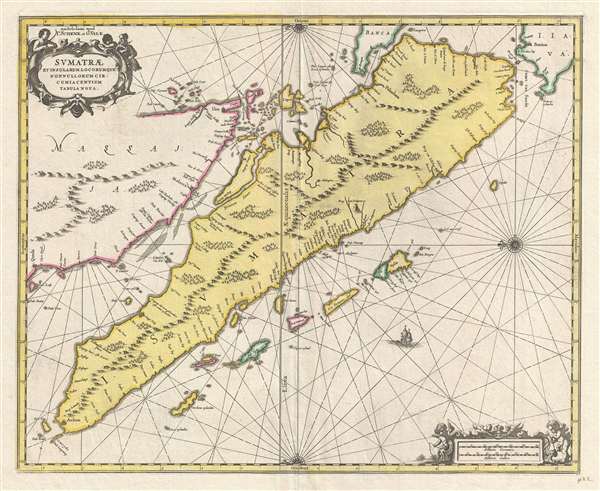 A stunning full color map c. 1710 map of Sumatra, Malay, the straits of Malacca, and Singapore by Gerard Valk and Petrus Schenk under the imprint of Valk and Schenk. The map is oriented to the east with north facing left. While the map focuses on Sumatra, then an important stop on the Dutch dominated Pepper Trade, it also includes much of the surrounding region, including the important Straits of Malacca and southern Malay peninsula, and the straits of Singapore, here identified as 'Nieuwe Straet.' Singapore Island does not appear as such, but a peninsula south of Johore is identified as 'Senasur,' clearly a precursor of 'Singapore.' The Strait of Malacca is clearly mapped with shallow areas noted. A number of important locals on the west coast of Malay, including Malacca and Jahore (Ihor) are noted. On Sumatra numerous points along the southwest coast are mapped but h only city identified is Aceh (Atchem).

Around this time there was a great deal of interest in this region in the Netherlands. The VOC seized control of Malacca from the Portuguese in 1644 with an eye on Malay's rich tin deposits. The tin region was under the control of the Sultan of Aceh who was unfriendly to the Dutch. In 1650, the Dutch made an alliance with Johor in an attempt to disrupt shipping in the Straits of Malacca.

Like most maps by Valk and Schenk, this map is derived from either Joan Blaeu or Jan Jansson. Since both cartographers often issued near identical work it is hard to know who originated the cartography. Nonetheless, Valk and Schenk maps are derived from the Jansson plates, which the partners acquired in 1694.