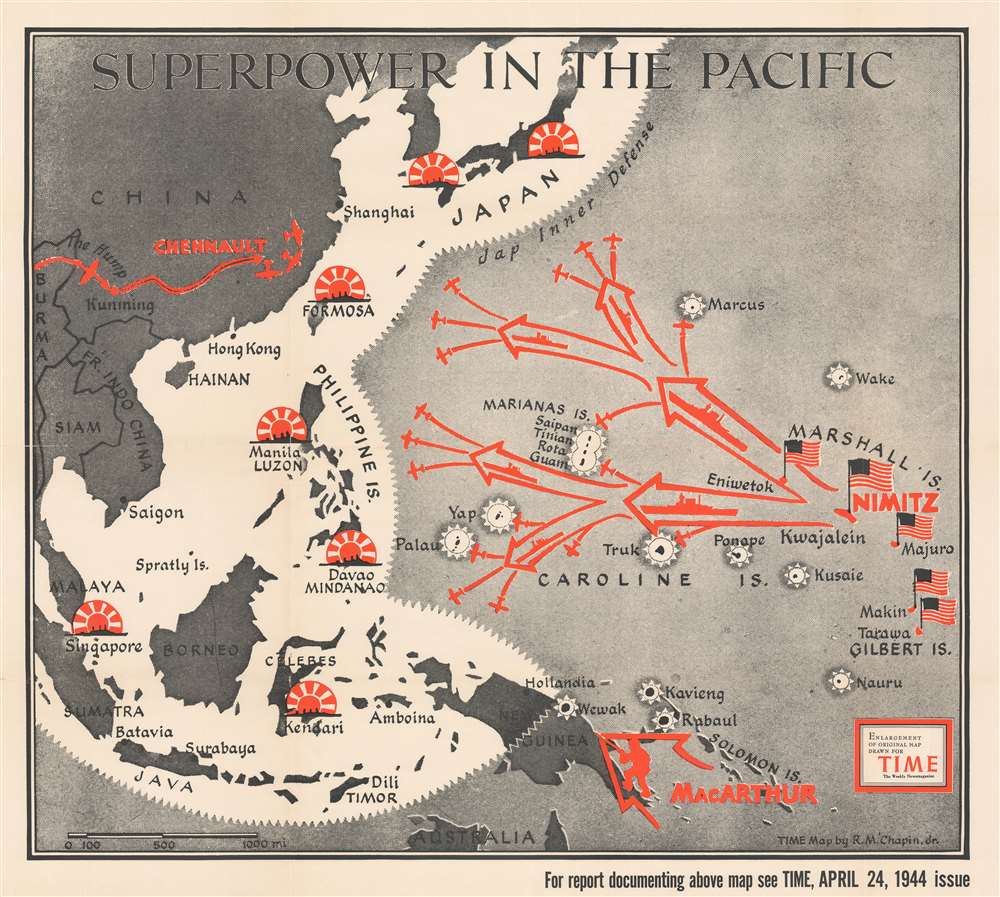 Highlights the progress of the Allied push against Japan in the Pacific all the while getting closer to Japan itself.
$625.00

This is a 1944 Robert M. Chapin Jr. map of the then-current situation in the Pacific Theater during World War II. The map depicts the region from Burma and China to the Gilbert Islands and from Japan to northern Australia.

A Look at the Geography

Individual islands and archipelagos are labeled throughout the Pacific. In the Central and Northern Pacific, the Gilbert Islands, Marshall Islands, and Marianas Islands are all identified, as are individual islands (such as Saipan, Tinian, and Guam in the Marianas) and atolls (a ring-shaped reef, island, or chain of islands made of coral) including Kwajalein in the Marshalls and Tarawa and Makin in the Gilberts. In the Southwest Pacific, individual islands are predominantly those identified, for example New Guinea, Celebes, Timor Borneo, Java, and Sumatra, all of which are part of several different nations today. The Philippine Islands are labeled separately, as are the islands of Mindanao and Luzon, which are within the Philippine Archipelago. Cities, such as Hong Kong, Shanghai, Saigon, Singapore, Manila, Batavia, and Surabaya are labeled.

By late April 1944, when this map was published, the United States had been fighting the Japanese in the Pacific since the attack on Pearl Harbor nearly two and a half years earlier. After a major campaign on Guadalcanal, in the Solomon Islands, the Pacific Theater was divided between General Douglas MacArthur, who commanded forces in the Southwest Pacific, and Admiral Chester Nimitz, who was in command of the Navy's charge across the Central and Northern Pacific. Here, both Nimitz and MacArthur are referenced by name in bold red lettering, indicating where their respective forces were located. The third Allied commander identified here is Claire Chennault, who became famous for commanding the American Volunteer Group, better known as 'The Flying Tigers'. By 1944, Chennault had rejoined the U.S. Army Air Corps and was commanding the 14th U.S. Army Air Force. Chapin also highlights Japanese bases, identifying them with a silhouette of a battleship in front of an illustration of the Japanese Rising Sun, the Japanese insignia widely-used during World War II.

Fighting in the Pacific

After realizing the vast distances the Allied forces would have to cover in order to reach Japan, a leapfrogging strategy was adopted by the Allies adopted a policy of 'leapfrogging' across the Pacific. Here, Tarawa, Makin, Majuro, Kwajalein, and Eniwetok are all colored red, because these were islands that the U.S. Army and U.S. Marine Corps invaded amphibiously, much like would happen in June 1944 on D-Day in Normandy, France. The fighting for these islands was fierce and bloody and set the tone for the rest of the Pacific War. The Marines suffered nearly twenty five percent casualties, and of the over 3,600 Japanese garrisoned on the atoll, only one officer and sixteen enlisted men surrendered. Chapin illustrates the 'leapfrogging' concept by using starbursts, probably meant to symbolize bomb explosions, on islands where Japanese troops were garrisoned, such as Truk and Rabaul, that Allied forces simply bypassed. Less than two months after this map was published, the Allies launched invasions of Saipan, Tinian, and Guam in the Marianas Islands. By capturing these islands, American bombers were within range of the Japanese Home Islands and began an organized bombing campaigns from airfields there. Allied forces would also land on islands in the Philippines by the end of the year.

This map was drawn by Robert M. Chapin Jr. to accompany an article in TIME Magazine that appeared in the April 24, 1944 issue. TIME subsequently published this edition of the map separately. The OCLC records two examples as being part of institutional collections at Franklin and Marshall College in Lancaster, Pennsylvania and at the Osher Map Library at the University of Southern Maine.