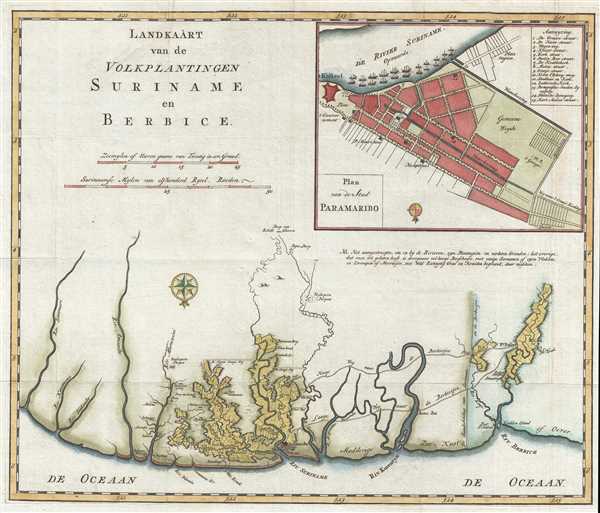 References the Jewish community in Suriname - one of the largest and earliest in the Western Hemisphere.

This is a 1767 Isaak Tirion map of the Dutch colonies of Suriname and Berbice and labels both the 'Portuguese' and 'German' synagogues in Paramaribo, known respectively as Zedek ve Shalom and Neveh Shalom. The map depicts the region along the northern coastline of South America from the Sinnamary (Sinamari) River in present-day French Guiana to the Berbice River and Fort Nassau, which was the capital of Berbice, and is located in present-day Guyana. Only illustrating along the coast and not very far inland, several rivers are labeled, including the Amanibo, Suriname, and Korentyn. Paramaribo, the capital of Dutch Suriname, is highlighted and sits at the mouth of the Suriname River. The myriad plots illustrated along the rivers, both in Suriname and Berbice, are plantations. Per the map, all of the land colored white is either savannah or forested, although some of it is covered in swamps. Numerous Indian villages are labeled, particularly along the Marawini River.

Perhaps the most intriguing part of this map, however, lies in the inset city map of Paramaribo located in the upper right corner. Fifteen locations around the city are identified numerically, with the names of these locations included in a table in the upper right corner of the inset. Location number thirteen reads, 'Portugeesche Jooden Synagoog' (literally translated as Portuguese Jew Synagogue) and location number fourteen is labeled 'Duitsche Synagoog' (German Synagogue). Suriname became one of the most important Jewish populations centers in the Western Hemisphere, and this community benefitted from special dispensations first from the British colonial government and then from the Dutch colonial government. By 1665, after three successive groups of Jewish settlers had arrived in Suriname, the British colonial government had granted several special privileges to the community, such as freedom of religion, permissions to build synagogues and Jewish schools, and the right to have their own court of justice and private civic guard (army). When the Dutch captured the colony in 1667, their commander left the privileges for the Jewish community in place. By the turn of the 18th century, nearly 600 people made up the Jewish community in Suriname. Some within this population were very wealthy, owning approximately 40 plantations and a sizeable number of slaves. One of the best indications of this wealth is the Jewish cemetery at Jodensavanne. It was filled with marble grave stones imported from Europe and was considered one of the most beautiful in South America. After the decline of the plantation economy in Suriname, a large portion of the Jewish community moved to Paramaribo, where the Ashkenazi Jewish community built the 'German' synagogue labeled here in 1719 and the Sephardic Jewish community built the 'Portuguese' synagogue in 1735.

This map was created by Isaak Tirion in 1767.