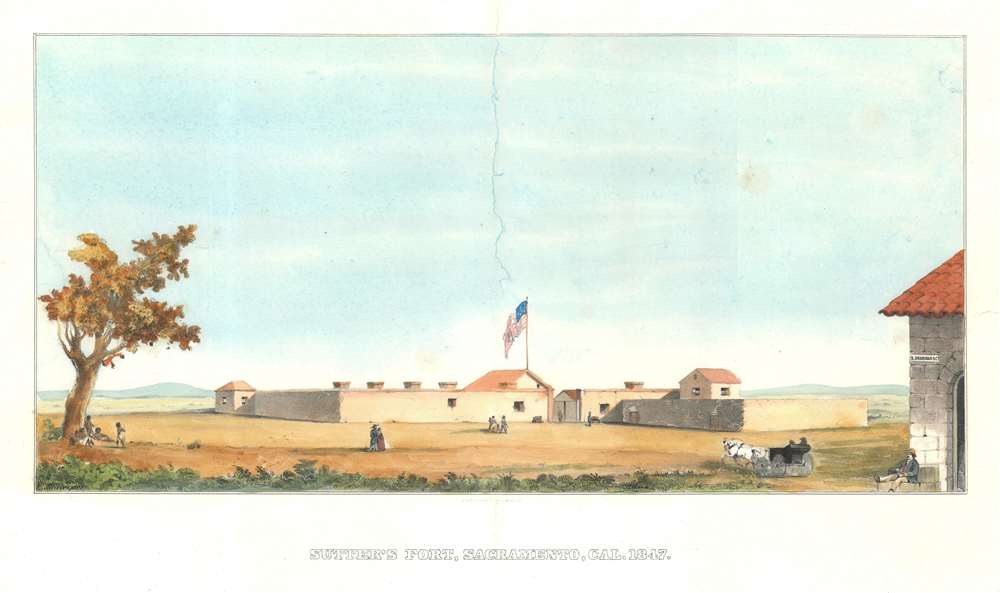 In the foreground a stone warehouse marks the site of S. Brannan and Co. Brannan (1819 - 1889) was a Saco, Maine born merchant and printer. He established the pictured store in 1847 - the moment this view represents. The figure reclining outside the store is likely Brannen himself. When the Gold Rush hit a year later, Brannan's business interests prospered, turning him into California's first millionaire. This view was likely initially issued by Brannan's printing company to promote the store.

Sutter's Fort was a 19th-century agricultural and trade colony in the Mexican Alta California province, located near modern day Sacramento. The first non-Indigenous community in the Sacramento Valley, the fort was founded in 1839 by John Sutter (1803 - 1880) and was originally called New Helvetia. Construction of the fortifications began in 1841. It was ideally situated on both the California Trail and Siskiyou Trail and served as a way station for travelers along both trails. By 1847, when this view was issued, Sutter's Fort was a small but prosperous settlement. A year later, 1848, James Wilson Marshall (1810 - 1885) struck gold at nearby Sutter's Mill, precipitating the 1849 California Gold Rush. Sutter's Fort rapidly transformed into a Gold Rush boomtown, which became modern day Sacramento.

This view appears in several editions and states. All are undated, but the general consensus is that it was printed between 1856 and 1866. Some examples are chromolithographs, and others, as here, are one-color lithographs with hand-color enhancement. It is likely that Brannan himself had a role in its original production. On this example, the imprint is faded, but it like most examples, was printed by Joseph Britton. Examples are evident at the Amon Carter Museum, California State Library, and the Library of Congress.

Samuel Brannan (March 2, 1819 - 1889) was an Irish American printer and businessman active in California in the middle part of the 19th century. Brannan as born in Saco Main, where he apprenticed as a printer in 1836. During his journeyman years, he traveled throughout the United States with a portable press. In 1842, he converted to Mormonism and began publishing the New York Messenger. Between 1845 and 1846, he organized some 220 Mormons to establish a Mormon Fort in San Francisco. While he failed to establish Mormonism in California, he did set up a press and began publishing the California Star, California's first newspaper. In 1847, Brannan established a store just outside Sutter's Fort. The move was prescient, within a year the California Gold Rush transformed the sleepy fort into the boomtown city of Sacramento. It is recorded that between 1848 and 1849, sales at the store averaged a staggering $150,000 per month - transforming Brannan into California' first (but not last) millionaire. He was elected Senator of California in 1853. Apparently in his later years, Brannan developed an alcohol problem and a violent temperament - leading to the loss of much of his great wealth. He died in San Diego in 1889. Learn More...


Joseph Britton (1825 - July 18, 1901) was born in Yorkshire, England, and immigrated to the United States in 1835 with his family, living in New York City, becoming a lithographer by 1847. In 1849, he left New York to seek his fortune in California during the California Gold Rush. He made the journey with George Gordon’s ‘Gordon’s California Association’, and chose the voyage which included an overland trek via Nicaragua. The voyage was supposed to last 60 days, but instead lasted an incredible 8 months. After several unsuccessful years in various gold mining camps, Britton relocated to San Francisco and established a lithography firm, probably in 1851, and then entered into a short-lived collaboration with C.J. Pollard in 1852, named Pollard and Britton. By late 1852, Britton had formed a partnership with the lithographer Jacques Joseph Rey. Rey married Britton’s sister in 1855, but Britton remained a life-long bachelor and lived with the Rey family. Rey and Britton were well integrated into San Francisco. They owned a plumbing and gas-fitting firm, which apparently Rey managed. They also worked with several different lithographers off and on, but their partnership solidified by 1867. Britton was one of the three original investors in Andres Hallidie’s first San Francisco cable-car line on Clay Street and served twice as a San Francisco City and County Supervisor. Learn More...

Library of Congress, PGA - Brannan--Sutter's Fort... (C size) [PandP].
Looking for a high-resolution scan of this?