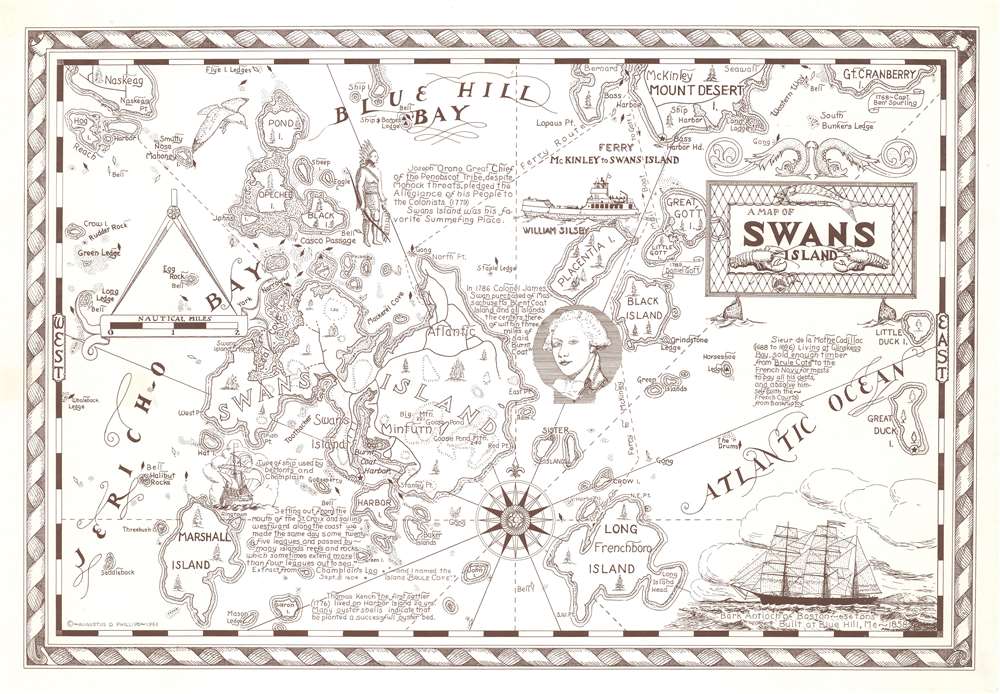 This is a 1963 Augustus Phillips pictorial map of Swan's Island, Maine. Swan's Island is situated to the left of center with the towns of Swan's Island, Minturn, and Atlantic labeled. Burnt Coat Harbor, Seal Cove, and other coastal features are illustrated and labeled. The region's numerous islands, including Harbor Island, Marshall Island, and the extreme southern portion of Mount Desert Island, are noted. Short texts provide historical context. One states that Colonel James Swan bought the island in 1786, while another impresses that Sieur de la Mothe Cadillac sold enough timber from Swan's Island (then known as 'Brule Cote') to absolve himself from bankruptcy in the eyes of the French Courts.

This map was created and published by Augustus Phillips in 1963. We note only one other cataloged example, part of the collection at the Northeast Harbor Library on Mount Desert Island.

Augustus Dewey Phillips (May 6, 1898 - December 14, 1975) was an American artist, cartographer, and publisher. Born on Mount Desert Island, Maine, as a boy Augustus and his brother Luther Philipps (1891 - 1960) helped their dad in a variety of odd jobs, including maintaining a boat rental business and harvesting and selling ice. Augustus graduated from Hebron Academy and then attended the University of Maine for a short time. After leaving university, Phillips became a Maine Guide and worked as a carpenter and draftsman in the South Portland and Boothbay Harbor ship and boat yards. The brothers traveled together widely throughout Maine. After Luther died in 1960, Augustus took over the map and postcard businesses. His passion for landscapes helped Augustus create his own map style. Augustus expanded the business and continued making new maps until he died in 1975. Augustus married Mary Fletcher on April 26, 1922, with whom he had four children. Learn More...

Northeast Harbor Library 3599.
Looking for a high-resolution scan of this?