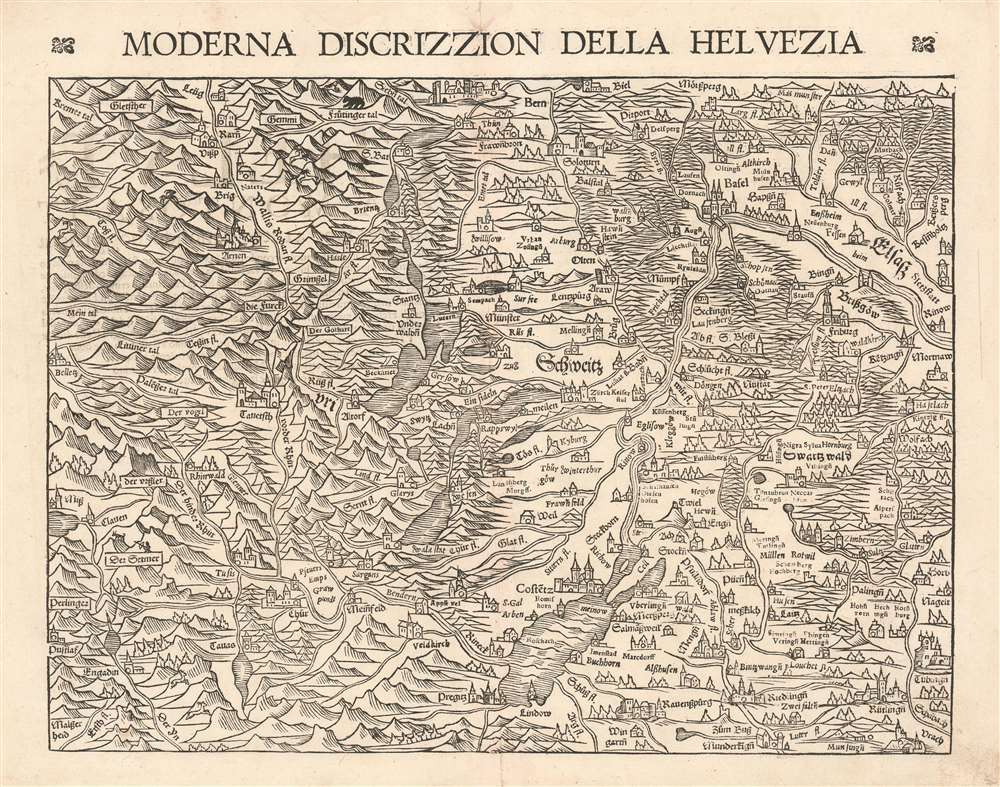 One of the Earliest Modern Maps of Switzerland

This is a bold, sharp example of Sebastian Munster's 1544 map of Switzerland, from an Italian edition of Munster's Cosmographia Universalis.. Among the many cities and towns shown are Berne, Basel, Konstans, Lucerne, and Friburg. Of the modern maps included in Munster's grand opus, this was one of those most informed by the editor's direct experience: The majority of Munster's life and work were spent living in Basel, and he surveyed the area personally. In fact, this map and the others of the Rhineland are, aside from his modern World map, the only of Munster's double-page maps to be substantialy revised during his lifetime. Drawing on his surveys of 1542, Munster produced this map to replace the one appearing in the pre-Cosmographia editions of Munster's Ptolemy. The new map improved both on the map's geographical detail and on its artistic quality. Switzerland's mountains, forests, lakes, rivers and cities are shown pictorially in the evocative woodcut. As the mountains grow higher and the population more sparse in the southern part of the map, Munster has added goats, a bear, and a hunter with a bow.

Munster's Switzerland map was the first of three of his maps covering the full length of the River Rhine. In order to more legibly carry the reader along the river's length, this and the other two Rhine maps were oriented to the west (hence, north is on the right-hand side of the map, and the Lake Constance is shown near the bottom of the map, with Basel above it.)

This map was introduced in the first, German edition of Cosmographia Universalis of 1544; it remained in that work and in later editions of Munster's Ptolemy until 1578, after which point the double-page maps of the long-lived Cosmographia were replaced and updated. This state of the map corresponds to all three Italian editions of the Cosmographia(1558, 1571 and 1575). The verso texts of all three are identically typeset, and the maps of all three are of the same 1558 state across the board; it is therefore probable that the maps of all three editions were in fact printed at the same time in 1558 and that the later editions were bound from the original 1558 printed stock. While this individual map is only catalogued once in OCLC, The Italian editions of Cosmographia are noted in fifteen institutional collections.

Munster, S. Cosmographia. (Basel, Petri) 1558     The Cosmographia Universalis, one of the greatest geographical and historical works of the 16th century, 'taught nearly three generations of laymen most of what they knew about the world beyond their native places' (Strauss). Filled with maps, views, and rich descriptions of places throughout Europe and beyond, it was the best general source of geographical information until the advent of Ortelius' Theatrum. It was first issued by Sebastian Munster (1488 - 1552) in its 1544 German edition, and stayed in print long after its author's death in thirty five editions, and in five languages. (Of these, the 1550 and 1552 editions are widely regarded as the most complete and truest to the author's intentions: thereafter, later editors continued to add to the work's text; editions from 1588 onwards employed an entirely different set of maps produced on Ortelius' model.) Munster's goal, initially, was to rally his homeland's humanists and scholars to produce a new map of Germany in order to 'see what kind of a land our ancestors conquered for their home... bring honor to our country and place its beauties in the clear light of day.' Munster's project quickly expanded to cover the known world in its scope to produce a 'sufficiently large volume, in which I touch upon the foundation of all nations and kingdoms, their peculiarities, rivers, mountains, customs of men, royal successions, origins of the more important cities, succinct histories, religions, characteristics and fertility of lands... in Germany, however, I tarry a little longer.'.

Very good condition. Some toning along the centerfold and upper margin.

OCLC 1040359826 (misdated). McLean, Matthew The Cosmographia of Sebastian Munster: Describing the World in the Reformation (Ashgate, 2007). Ruland, Harold L. 'A Survey of the Double-page Maps in Thirty-Five Editions of the Comographia (sic) Universalis 1544-1628 of Sebastian Munster and in his Editions of Ptolemy's Geographia 1540-1552' in Imago Mundi XVI 1962
Looking for a high-resolution scan of this?