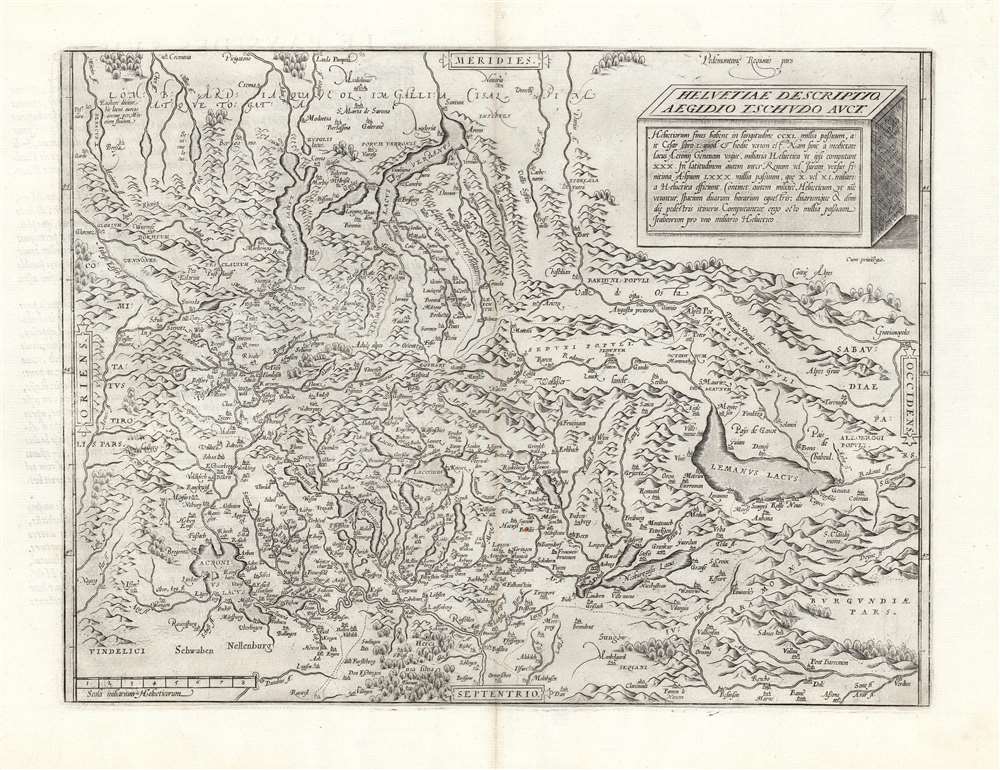 This is Abraham Ortelius' 1570 map of Switzerland, the first to appear in a modern atlas. This richly detailed, southern-oriented map provided the best delineation of the Swiss Confederation of the sixteenth century.

Coverage extends from southern Germany and France, including the headwaters of the Danube River in Swabia and it reaches as far south as the Piedmont and Savoy. Switzerland's rivers, mountains, and lakes are depicted in vigorous detail. The map's title cartouche is presented as a great block, or box, with writing on three sides: the top bearing the title and author, the facing side describing Switzerland's location and extent. The text of the shadowed right face, bafflingly, describes the chimney-sweep denizens of the Valley of Vegets in the Canton of Ticino, who plied their trade throughout Europe.

In the upper left, that is to say the southeastern extreme of the map, is the Lago di Garda: a brief Latin text explains 'It is said that this lake produces gold grains of sand, brought by the river Mincius'.

Ortelius credits this map to the Swiss statesman, historian, and forger Aegidius Tschudi. Although Tschudi's history of the Swiss Confederation was not published until well into the eighteenth century, his influence on the mapping of Switzerland had already been well established. Sebastian Münster's maps of the country, printed first in 1538 and again in 1540 for his Geographia and Cosmographia, were both derived from Tschudi's manuscripts. Ortelius' work, however, was drawn from a more courant 1565 Tschudi manuscript.

This map was engraved in 1570 and included in the first Latin editions of Ortelius' Theatrum. The plate remained in use throughout the work's long print run. It conforms to the first state of the map as described by van den Broecke. (A second state, appearing no earlier than 1584, added further place names.) The present example agrees typographically with the 1581 French text edition, of which van den Broecke estimates there were 400 printed. Nine examples of that edition of the book are listed in OCLC. In various editions, the separate map is well represented in institutional collections.


Aegidius (or Giles or Glig) Tschudi (February 5, 1505 – February 28, 1572) was a Swiss statesman and historian, best known as author of the Chronicon Helveticum. a history of the early Swiss Confederation. A lifelong office server, he in 1558 became the chief magistrate. He was sent as an ambassador to the Emperor Ferdinand, who in turn ennobled Tschudi in 1559. It is interesting to note that his most important works were not published until well after his death - his Chronicon Helveticum was not published until the 1730s. In spite of this, his scholarship did not go unnoticed: Ortelius 1570 map of Switzerland was derived from Tschudi's work, for example. As a historian, Tschudi earned criticism: his writings fraudulently exaggerated the origins of his family in order to enhance their authority, and he was not above forging documents to do so. Learn More...

Ortelius, A., Theatre de l'univers, contenant les cartes de tout le monde, (Antwerp) 1581.     Abraham Ortelius' magnum opus, Theatrum Orbis Terrarum, was the world's first regularly produced atlas, which 'set the standards for later atlases . . . It was the first undertaking of its kind to reduce the best available maps to an uniform format.' (Koeman) A modestly-sized work of fifty-three maps in its first edition of May 1570, it was an immediate success: there were three further editions that year, and the work remained in print for a total of 32 editions, the last of which was 1641, well after its author's 1598 death. Ortelius added to his atlas constantly, and by 1595 the Theatrum contained 147 maps. Ortelius is renowned generally as an editor, and indeed much of the Theatrum is compiled from a variety of sources: in such cases, Ortelius was scrupulous in naming his sources. But Ortelius was also a mapmaker in his own right: many of his maps are a distillation of various sources into his own work, and there were many maps - particularly in his atlas of Biblical and ancient history Parergon - which were entirely Ortelius' work. In his role as an editor, Ortelius followed in the footsteps of Munster, whose Cosmographia was, until Ortelius, the best window on the world for the curious European reader. In terms of the artistry of his maps, Ortelius oversaw the first great flourishing of copperplate engraving in the service of cartography to occur in Northern Europe. Ortelius' work provided the model for the atlases of Mercator, Hondius, Blaeu and all their progeny in the 17th century - many of whom were to produce faithful editions of Ortelius' maps in their own productions.

Very good. One weak spot in paper with some text showthrough, reinforced. Else excellent with a bold, sharp strike.