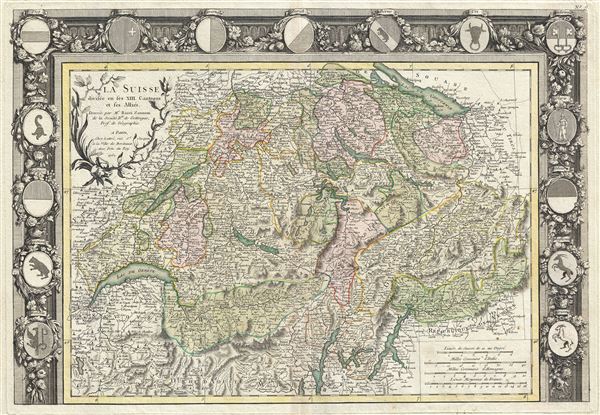 This is a beautiful example of Rizzi Zannoni's 1762 decorative map of Switzerland. It covers the entirety of Switzerland divided into its cantons and allies. The map offers excellent detail throughout showing mountains, rivers, forests, national boundaries, regional boundaries, forts, and cities. The map is adorned on three sides by fifteen coats of arms and features a beautifully illustrated title cartouche in the upper left quadrant. This map was drawn by Rizzi-Zannoni and included as plate no. 9 in the first edition of Jean Lattre's 1762 issue of the Atlas Moderne.

Very good. Original platemark visible. Minor wear and verso repair along original centerfold. Blank on verso.
Looking for a high-resolution scan of this?