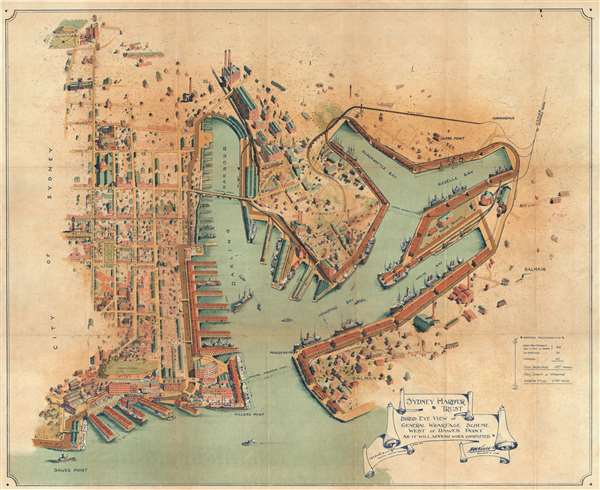 Rare view of Sydney Harbour following the reconstruciton of 1900 - 1913.

A scarce 1913 William Hardy Wilson chromolithographic view of Sydney Harbor, Australia. The view looks southward from somewhere high above Goat Island. Dawes Point, Barangaroo, and the Central business district appear on the left, Pyrmont is center, and Balmain is on the right. The focus of the view are Sydney's large harbors, Darling Harbour, Backwattle Bay, Rozelle Bay, White Bay, and Johnstons Bay. It illustrates proposed subaqueous tunnels and is illustrated with numerous cargo ships throughout.

The view was prepared to illustrate the extensive development and reconstruction of Sydney's harbor at the hands of the Sydney Harbour Trust. Prior to the founding of the trust, the harbor's various docks were controlled by private interests and were constructed haphazardly without an overall plan. The commissioners of the Trust began a massive reconstruction of the harbor from 1900 to about 1915. Their work included installing rail lines, rebuilding wharves, replacing old warren-like roads with modern thoroughfares, and expanded the scope of the port from an aggregate tonnage of 49,000 to over 200,000 tons. Their great project, nearly completed in 1913 when this map was made, transformed Sydney into Australia's largest modern urban port.

This view was published by the Sydney Harbour Trust and drawn by architect / artist William Hardy Wilson. It is today scarce with the OCLC identifying only 3 examples in Australian collections and one at the British Library.

William Hardy Wilson (February 14, 1881 - December 16, 1955) was a Sydney based Australian architect, artist and author. As an architect he is regarded as one of the great masters of the 20th century. Wilson was born in Campbelltown, New South Wales, the second son of William and Jessie Wilson. He attended Newington College and studied architecture at Sydney Technical College. He also studied drawing and painting under the Australian painter Sydney Long (1871 - 1955). He also studied in England where he passed the examinations of the Royal Institute of British Architects. Back in Australia he partnered with fellow architect Stacey Neave. Wilson was impressed with American colonial architecture and attempted to recreate it in Australia, becoming a major proponent of the Inter-War Georgian Revival style. Most of his architectural work consisted of private home and small commercial buildings, several of which survive today. In 1927 Wilson relocated to Melbourne and, in 1930, to Tasmania. Wilson eventually returned to Melbourne where he lived in Richmond until his death in 1955. Learn More...


Sydney Harbour Trust (November 1, 1900 - 1936) was an Australian extragovernmental organization established to Navigation Department and Marine Board of Sydney Harbour. Prior to the founding of the trust Sydney's many wharves and piers were privately controlled and constructed without an overall scheme in mind. The Trust changed all of that. Among other duties, the Trust was responsible for the improvement and preservation of Sydney's port, movement of vessels and handling of cargo, dredging operations, licensing, erections of piers, wharfage tax, and more. All foreshores, lighthouses and tugs within the harbour which belonged to the Government were vested in the Trust, as well as the power to reclaim land. It was run by a parliament consisting of three appointed commissioners. The trust was decommissioned in 1946 and replaced with the Maritime Services Board. Learn More...