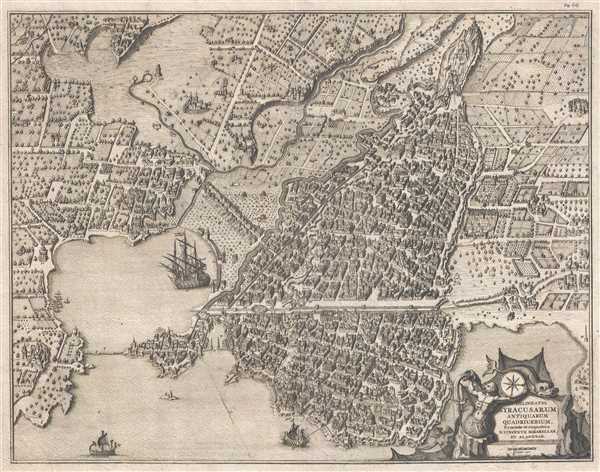 A rare, incredibly detailed, and meticulously engraved view of Syracuse.
$600.00

This is a rare and beautifully engraved 1725 Pieter van der Aa view of Syracuse, Italy. Oriented toward the west, the view depicts the entire city in incredible detail, with individual buildings, walls, and streets illustrated throughout. Nearly 200 locations are numerically labeled, though unfortunately the index identifying these locations is not present. Numerous large estates, manor houses, and even castles occupy the territory around Syracuse, indicating a large amount of wealth located in and around the city. A large sailing ship is moored in Syracuse harbor, with two smaller vessels navigating the waters along the coast, one of which appears to be aflame. A nautically-themed decorative title cartouche is situated in the lower right corner and features a merman replenishing the sea from a shell, a sea monster, fishing nets, and a winged woman.

This view was created by Pieter Van der Aa and published in 1725. This view appears to be very rare on the market. We have been able to identify one other example in institutional collections