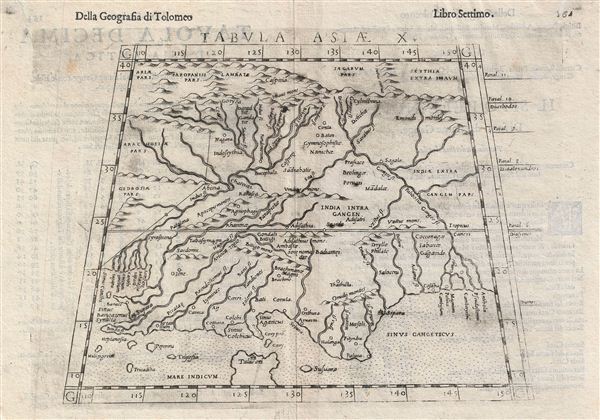 This is an uncommon 1588 Ptolemaic map of India issued for Girolamo Ruscelli's Italian edition of the Geografia di Tolomeo. Cartographically Ruscelli based this map on interpretations of Claudius Ptolemy's Geographica by Bernard Sylvanus and Sebastian Munster. The map covers the regions between the Indus River valley and the Ganges and from the Himalayas.

Though somewhat difficult to understand at first glance, this map corresponds to many actual locations and is upon close examination yields some of its secrets. The Indus Valley is readily identifiable in the west as is the Ganges River Valley bounding the east. The Himalayas crown the northern parts of the map and, at the southern extension, we can identify the Indian Ocean (Mare Indicum) and the island city of Talacori - an ancient Ptolemaic reference to the northern tip Ceylon. The subcontinent itself is barely discernible. The island between Talacori (Ceylon) labeled Cory and the strange peninsula between the Sinus Colcicus and Sinus Agaricus that separates the important ancient world maritime trading cities of Colchi and Aruarni can only be a primitive mapping of Rama's Bridge (Adam's Bridge), the limestone ridge separating India from Ceylon. Further east, in the Sinus Gangeticus or Bay of Bengal, the greatest city is Sipara, an early name for modern day Narsapur. The interior is unbelievably confusing. At center some of associated the city of Adisathra with the modern day city of Chattisgarh. The Orudij Montes, also known as the Oroudian Mountains, are possibly the Western Ghats. However, this is uncertain and though volumes have been written on the subject Ptolemaic India, especially in the 19th century, no clear consensus has been formed.

A fine, collectable, and early piece essential for any serious collection focused on the cartographic emergence of India in european maps. Published in Girolamo Ruscelli's Italian edition of the Geografia di Tolomeo.

Nordenskiold, A. E., Facsimile-Atlas to the Early History of Cartography with Reproductions of the Most Important Maps Printed in the XV and XVI Centuries, 227. Shirley R., Maps in the Atlases of the British Library, T.Ptol-10f.
Looking for a high-resolution scan of this?