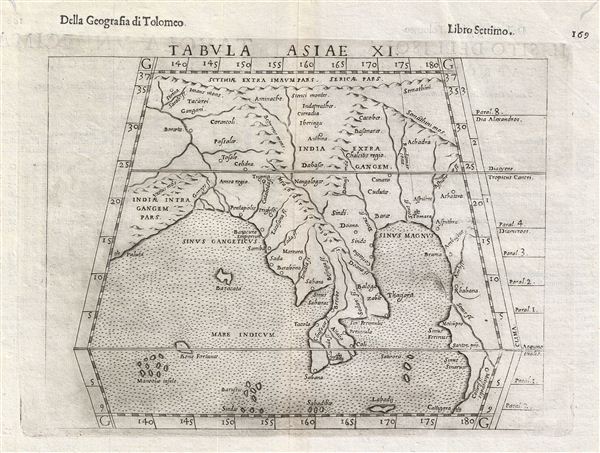 Reflects the curious Ptolemaic convention of a landlocked Indian Ocean.

This is an uncommon 1588 Ptolemaic map of Southeast Asia and the Malay Peninsula issued for Girolamo Ruscelli's Italian edition of the Geografia di Tolomeo. Cartographically Ruscelli based this map on interpretations of Claudius Ptolemy's Geographica by Bernard Sylvanus and Sebastian Munster.

Although somewhat difficult to understand in the context of modern geography, this map rangers from the Ganges River in India east to cover all of Thailand, Burma, Vietnam and the China Sea, it extends southward to the tip of the Malay Peninsula, and north to the Himalayas. The Ganges can be clearly identified. To the east of this river the Kingdom of Anrea Regio appears to correspond to Burma. Anyone admiring the golden monuments of modern Burma would have no trouble understanding the name, Anrea Regio, which roughly translates to 'Kingdom of Gold.' Following the shore southwards we come to a gulf or bay identified as Sinus Sabarac, most likely the modern day Gulf of Martaban. Across the narrow isthmus, another gulf, the Sinus Perimulic, would therefore be the Gulf of Thailand. In Malaya itself the Chirsonaie Fleuve, no doubt refers to Cheronesus, an archaic name for the region. The city of Sabana is located roughly where Singapore is today though some speculate that the island that it rests on could only be Sumatra. The mountain range running down the middle of the region correctly corresponds to the mountainous divide separating modern day Thailand from Burma. Ptolemy refers to this region as

a habitat of tigers and elephants . . . lions and robbers and wild men who live in caves, having skins like the hippopotamus, who are able to hurl darts with ease.

Between India and Malaya the Island of Bazacata most likely represents the Nicobar Islands. Ptolemy comments in his Geographica that the people of this island do not wear clothing; a convention commonly associated with the Nicobar Islands and reported by numerous travelers including Marco Polo, as well as Arab and Chinese navigators. The islands further south, Bone Fortune, Maneolae, and others, were believed to be highly magnetic such that the nails would be pulled from passing ships, causing them to sink while the hapless crews were devoured by the indigenous anthropophagi.

This map's most intriguing element is the southward extension of land running along the eastern edge of the map and extending beyond the border. This landmass reflects speculation, inspired by Ptolemy, that the Indian Ocean was landlocked. It was believed that this landmass extended far southwards before turning westward and connecting with eastern Africa. Though the exploits of Vasco de Gama and Magellan had proven that the Indian Ocean was not fully land locked, it was believed that a large tract of land, possibly even America, attached to Asia west of Malaya or the Cheronesus. Thus the 'Great Promontory' or 'Dragon's Tail' that appeared on many maps of this region well into the 16th century. The City of Cattigara, located here in the bottom right corner of the map, is cited by Ptolemy as southernmost known point. There has been considerable debate about the true location of Cattigara, certainly Magellan and the other great navigators failed to identify it, with some attaching the name to Hanoi or South China and others placing it on the shores of South America. Be as it may, the Ptolemaic model retained a great deal of influence well into the 16th century until Portuguese and Dutch navigators more fully explored the region.

A fine, collectable, and early piece essential for any serious collection focused on the cartographic emergence of Southeast Asia in European maps. Published in Girolamo Ruscelli's Italian 1588 edition of the Geografia di Tolomeo.

Very good condition. Some restoration to upper left and right margin. Else a fine example with a crisp dark impression.

Curtis, R. and Durand, Fr. Maps of Malaysia and Borneo: Discovery, Statehood and Progress, no. 2. OCLC 7470062.
Looking for a high-resolution scan of this?