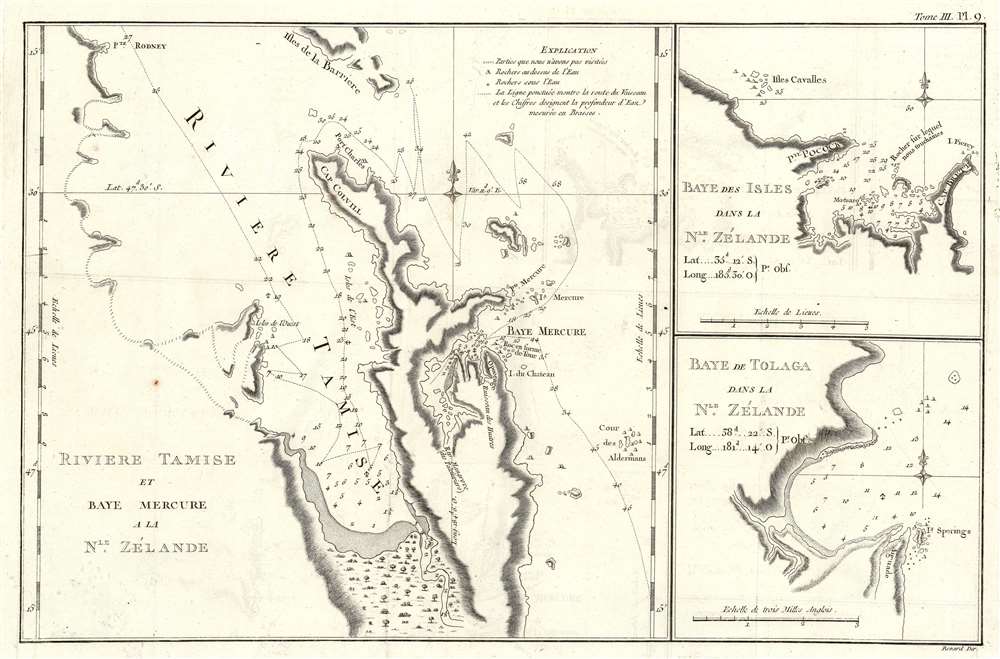 French Edition of some of New Zealand's First European Anchorages.

This is the 1774 first French edition of the first map of New Zealand's North Island, navigated by then-Lieutenant James Cook during his first voyage of discovery aboard the H.M.S. Endeavor.

The main chart shows Cook's track up the east coast of North Island to the Endeavour's November 9, 1769 anchorage at Mercury Bay. Topography is shown pictorially; anchorages both in Mercury Bay and around the peninsula in the Firth of Thames are marked. Navigational threats, such as underwater rocks, are shown; coastlines that are presumed to exist (but that Cook did not explore) are sketched in with faint hachure.

The second chart on the sheet focuses on the Bay of Isles, near the northern extent of the Coromandel Peninsula. Point Pocock (now Wiwiki) is named, as are Piercy Island and Cape Brett. The latter were named as the result of a visual pun, inflicted by Cook at the expense of Senior Naval Lord Sir Piercy Brett. Cook chose the name because the island featured a Despite his sense of humor, the navy would continue to give Cook command of ships.

The third chart is of Tolaga Bay, Cook's October 24 anchorage, and site of one of the expedition's important longitudinal calculations. (These were vital for confirming the positions of the various coastal formations plotted at sea.)

This map was engraved by Robert Bénard for the 1774 French edition of James Hawkesworth's 1773 account of Cook's voyages. It follows the 1772-1773 English edition engraved by William Whitchurch and published in 1773. While Hawkesworth's book is well represented in institutional collections, this separate map appears catalogued only in the National Library of Australia.